Thessaloniki is the second largest city in Greece. I knew nothing about it when we decided to add it to our Balkans itinerary. When I arrived in this Northern city, I fell in love pretty quickly. It has excellent museums, a great food scene, historic architecture and a beautiful seafront promenade – how could I not?

Thessaloniki has a slightly different vibe to Athens. I would highly recommend visiting both. We stayed for 6 days, which was just enough time to get a feel for the character of the city, try a few different restaurants and spend plenty of time walking around and exploring.

Our visit was in the middle of December – which was a great time of year to go. The weather was sunny during the day and chilly at night. The streets were lit up with sparkling Christmas lights. However, I believe this would be a great place to visit no matter what time of year it is. 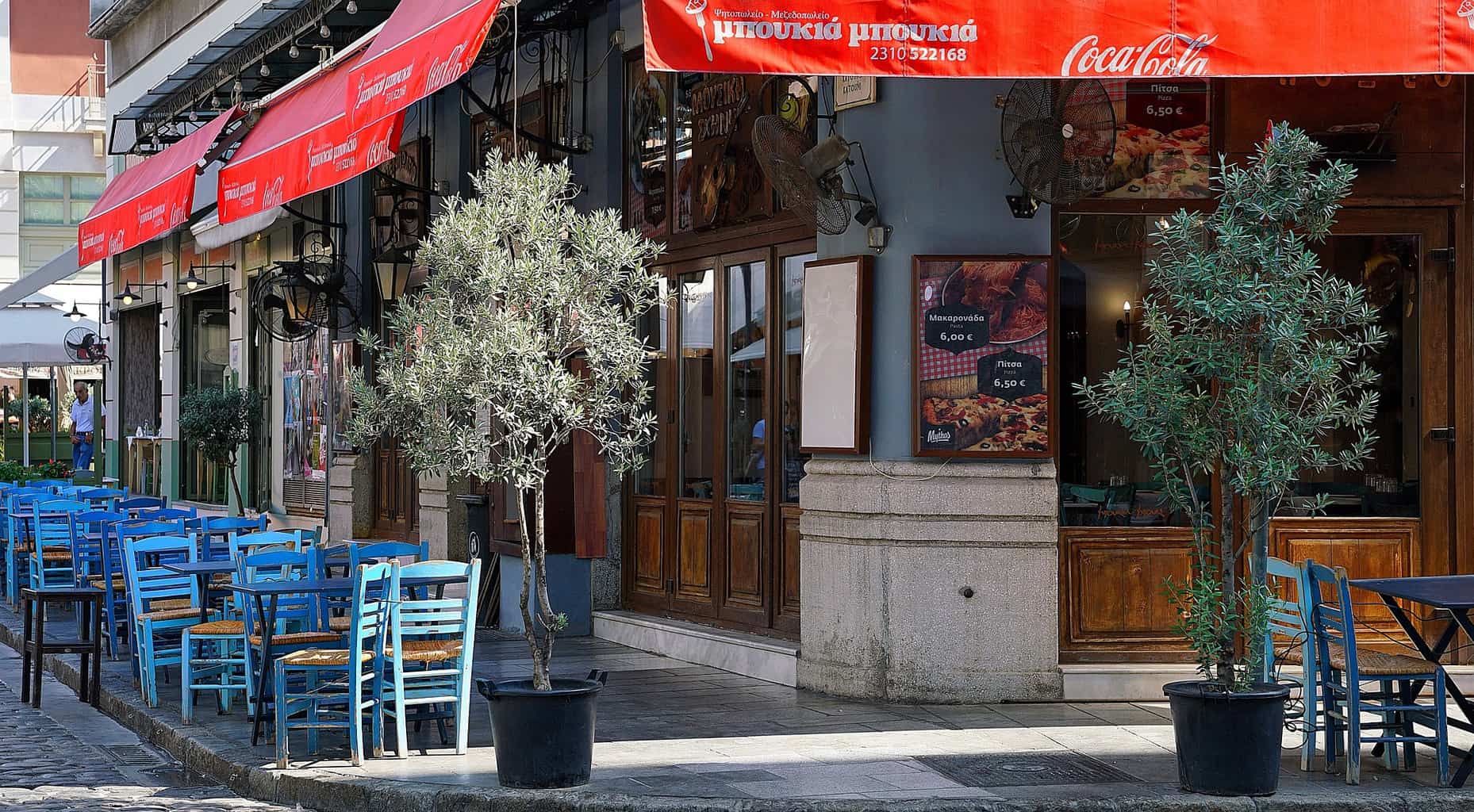 A Bit of History

King Cassander of Macedonia founded Thessaloniki in 315 BC. The King named it in honor of his wife Thessalonike. She was half-sister to the famous Alexander the Great.

It was one of the major cities of the kingdom during the Hellenistic Era. This city has always been very diverse, offering asylum to many different ethnic groups. It has also always been an ideal location for trade, with plenty of wealth flowing through the city’s port. The steady stream of new people and new ideas from all over the world gave Thessaloniki a cosmopolitan atmosphere that is still there to this day.

When Macedon fell in 168 BC, Thessaloniki became a city of the Roman Republic. During Roman rule, it became a capital of all Greek provinces. When the Roman Empire fell and Byzantium rule began, Thessaloniki was the second-most important city in the Empire.

In 1492, Spain persecuted the Jewish population. Many of them sought asylum by the Ottoman Sultan and were welcomed into Thessaloniki with open arms. The city was known as the Jerusalem of the Balkans – a melting pot of languages, nationalities and religions. For around 500 years, the city was a vibrant center of Jewish life.

What to Expect In Thessaloniki 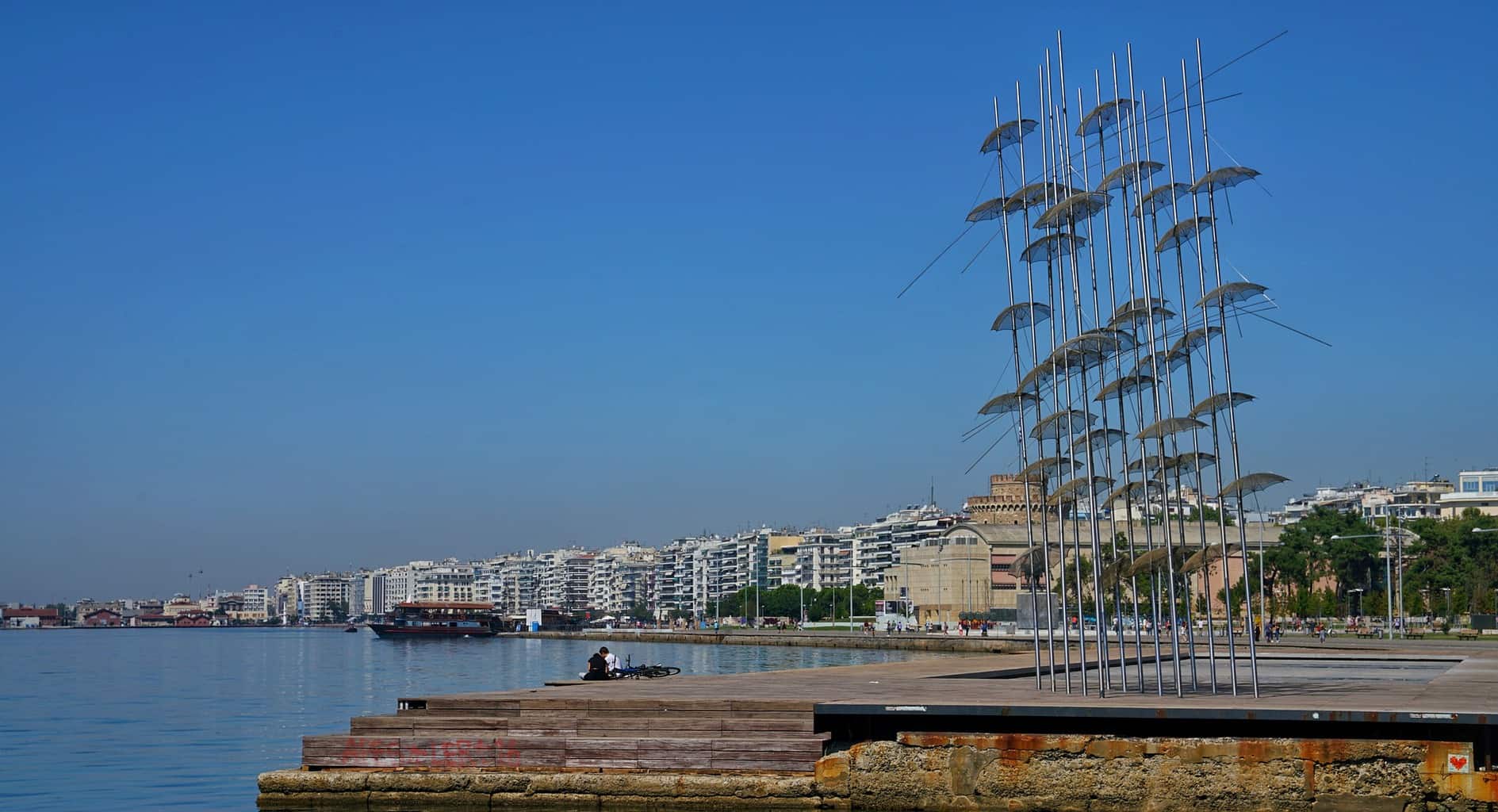 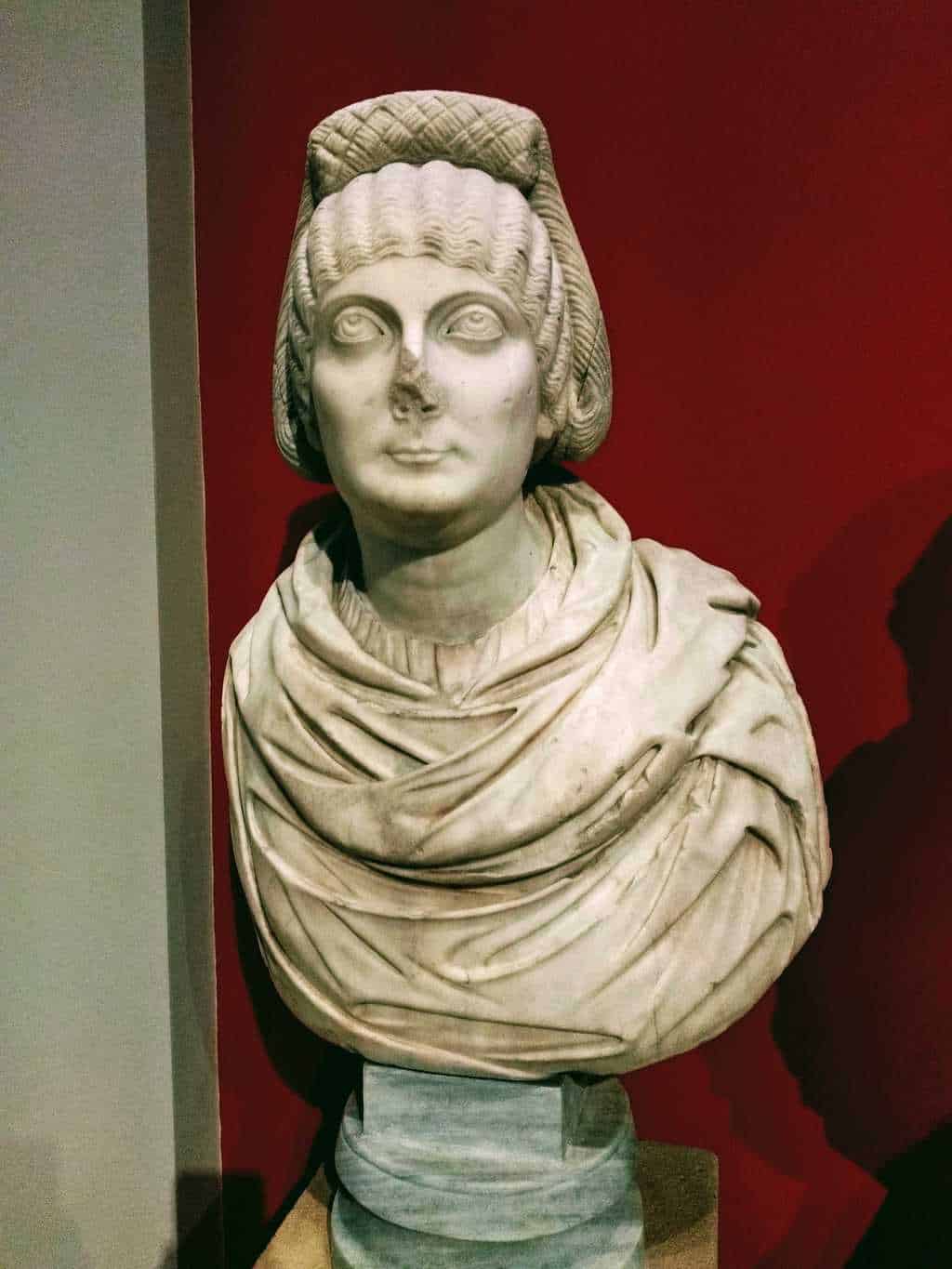 The Archeological Museum of Thessaloniki

One of my favourite attractions in Thessaloniki, this museum kept me captivated for hours. Now, I know I’m a major museum geek. (Also, I’m obsessed with Greek mythology so I’m pretty biased.) However, even if you just have a passing interest in Greek history and art it’s worth a visit.

It’s one of the largest museums in Greece and the exhibitions are excellent. Thanks to the well-thought out curation and interpretive panels, you really get a sense of what life was like in ancient Greece. The sculptures, pottery and other artefacts are beautiful and fascinating.

One of the items in the museum took my breath away. It was a skeleton of a woman from the 3rd century AD in a lead coffin within an elaborately decorated marble sarcophagus. The sealed lead coffin kept her incredibly well preserved – even the fabric of her dress and her hair. Chills. 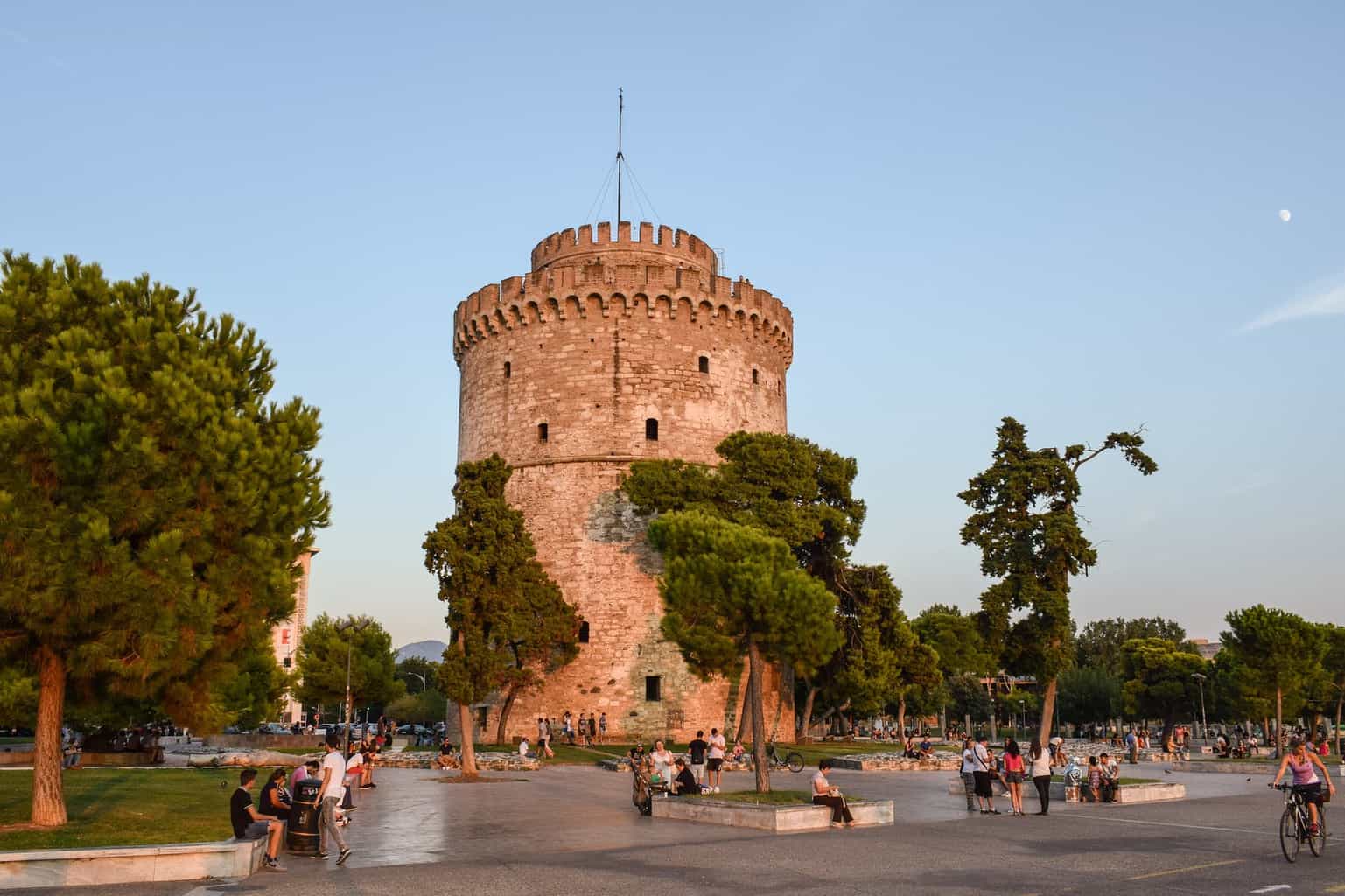 You can’t miss this Thessaloniki landmark, sitting on the harbour with the seafront promenade running alongside it. It was built in 1430, after the fall of Thessaloniki to the Ottomans. The current tower is actually a reconstruction, replacing an old Byzantine fortification from th 12th century. On the site, you can see an exhibition about the history of Thessaloniki.

The Ottomans used the tower as a fortress, garrison and prison. The nickname “Tower of Blood” is because many prisoners were brutally tortured there. Thessaloniki was later annexed from the Ottoman Empire to the Hellenic State in 1912 during the First Balkan War. At this point, the tower was whitewashed to symbolize “cleansing” and became known as the White Tower.

Make sure you climb to the top of the tower so you can enjoy the incredibly views of the Thermaikos Gulf and the city. 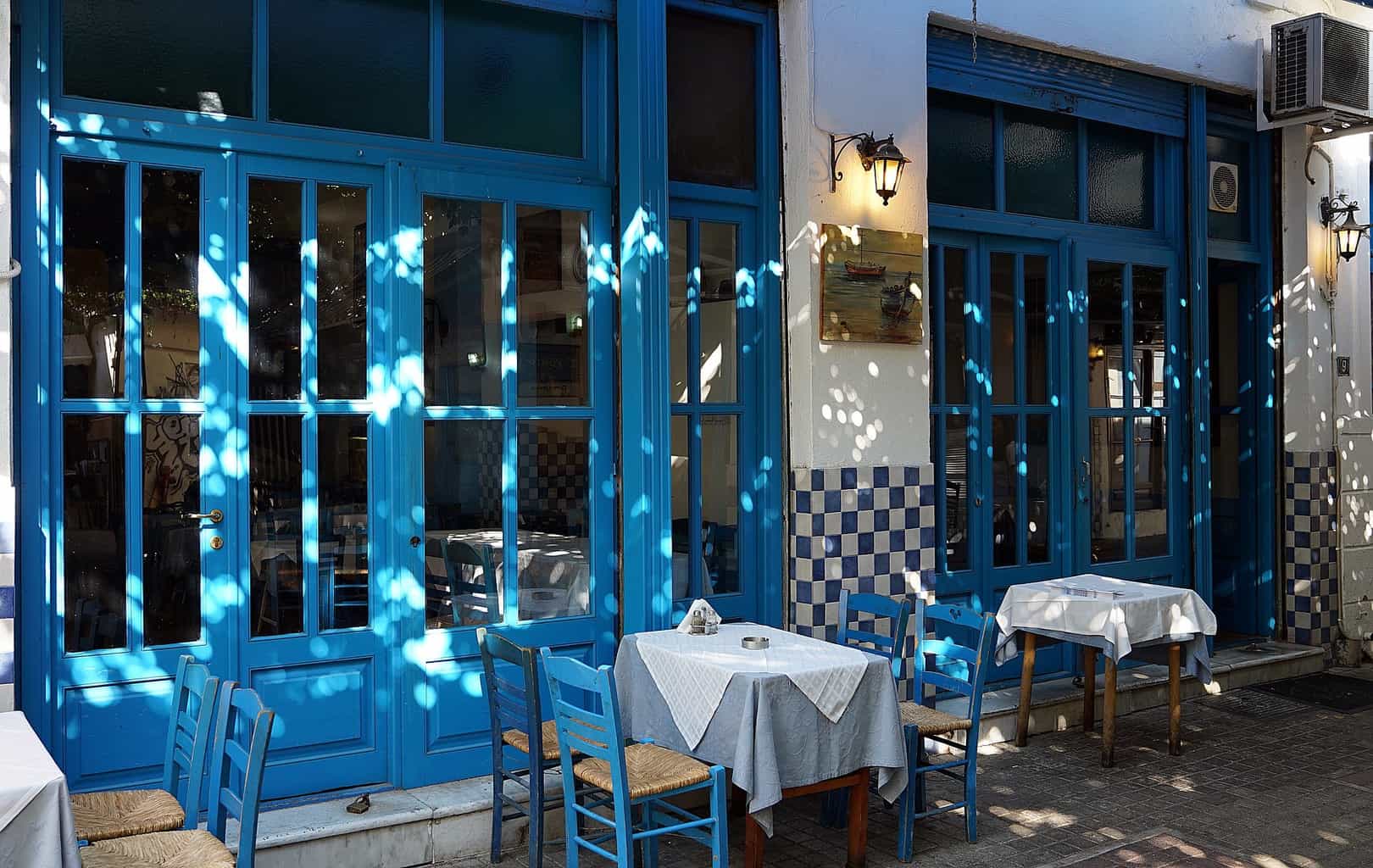 This district of town used to be where shops would sell oil (that’s what the name means) and it was the central market and bazaar during Ottoman occupation. After the Great Fire of 1917 it began to decline. It was completely abandoned by the 70s. It was declared a historical monument in 1985 and was revitalized.

Now Ladadika is one of the coolest spots in the city for dining and nightlife, with tons of great taverns, bars and restaurants within the renovated historic buildings. Lee and I really enjoyed wandering through this area in the evenings, enjoying the fun buzz. If you visit in the winter, the sparkling Christmas lights make it even more magical.

This is not a recommendation for a specific place. Simply enjoy the wonderful big, juicy, meaty, smoky gyros sold at the street stalls and small shops around Thessaloniki. They make a simple, quick and affordable meal and they are superb.

If you’re wondering where to start, here’s a guide to the best gyros in Thessaloniki. My stomach is grumbling just thinking about it.

To Pantopolio: The Grocery of Thessaloniki

Lee went for a walk to do some shopping and I got an excited message from him telling me to come meet him right away. He had wandered into the Grocery of Thessaloniki: a gourmet food shop packed to the rafters with products from all over the world.

We walked around the shop in awe. This foodie treasure trove had everything from American imports like Snapple, Louisiana hot sauce and Peanut Butter to high end items like organic truffle oil with gold flakes. Any type of food you could imagine, from Scottish shortbread cookies to Thai red curry paste, could be found on these shelves.

The enormous shop even has another level below ground, with even more wonderful imported treats. After being in Kosovo, where the supermarket selection was quite meager, Lee and I were in heaven.

The Greek (To Elliniko)

If you’re looking for an authentic Greek meal, this place was excellent. I had the Winemakers Lamb, soft and tender with a flavourful wine-based sauce. The tzatziki was fresh, rich and flavourful (and what’s a Greek feast without tzatziki?)

The service was also great and thought we good excellent value for the price. It has great ratings on TripAdvisor and a Certificate of Excellence (not surprisingly). 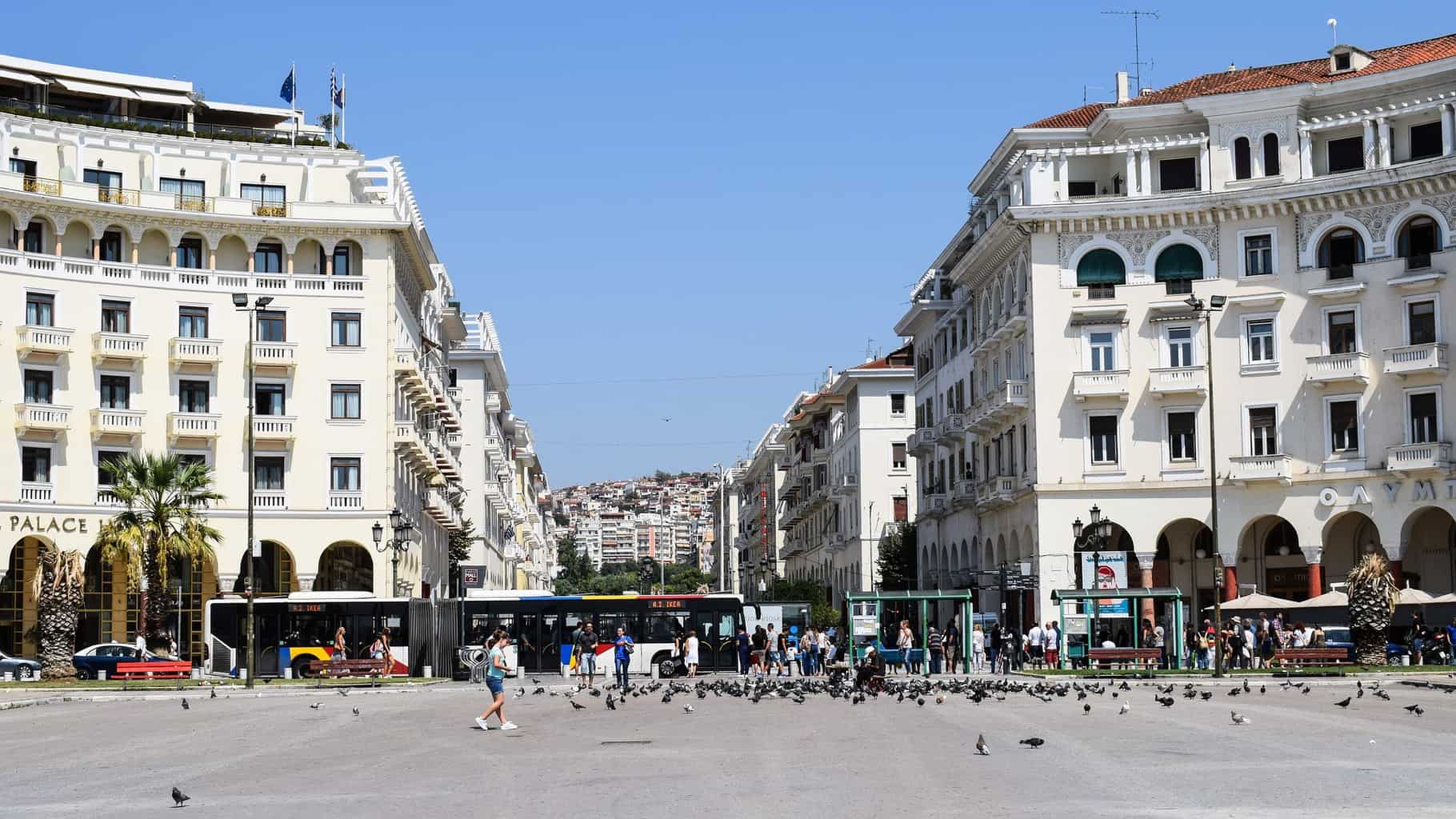 Any questions about Thessaloniki?

If you’re planning a trip and have any questions about what to expect in Thessaloniki, leave them in the comments below! Or, if you’ve been to Thessaloniki and you have a recommendation, please share it!

Mykonos to Delos: How to Do This Fascinating Greece Day Trip