If I could have a crush on a city, it would certainly be on this one. Poetic and beautiful, yet a little rough around the edges, Valparaiso has a complex past and many layers. The more I got to know it, the more I wanted to know. We returned there twice during our travels in Chile and stayed for almost a month in total… I didn’t want to leave.

Of course, not everyone loves Valparaiso as much as me. That’s fine – taste in cities is individual just like taste in music or films. I have met a few other travellers who said they weren’t fond of it and thought it was just another dirty, smelly port city. I can’t argue that it’s not – but it’s a dirty, smelly port city with a very cool vibe. Some say there is not a lot of “attractions” there, however in my opinion the “thing to do” in Valparaiso is just to explore the streets, eat in the restaurants, drink in the bars and just soak up the atmosphere.

So what did I love about Valpo?

Nearly Every Surface is Covered in Art 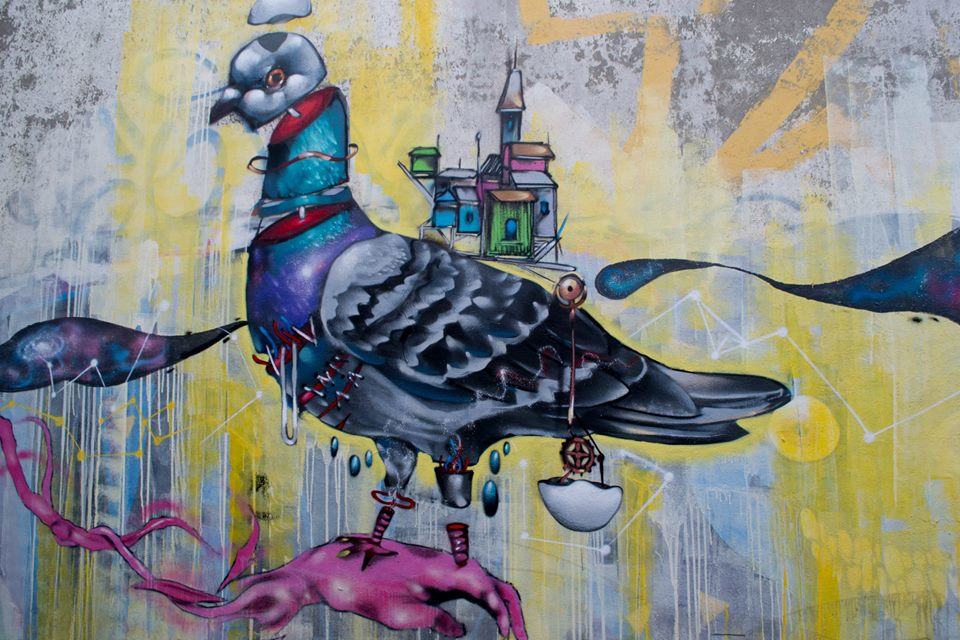 If Valparaiso was a person they would be a punk rocker who is covered from head to toe in richly detailed colourful tattoos. This city is known for its street art and almost every building has a vibrant mural splashed across it. Take a walk through the winding, chaotic streets and up the steep seaside hills and you will see what I mean. The paintings vary wildly in style, from abstract geometric patterns to figurative political narratives to spoofs on famous masters and surrealistic fantasy worlds. These are not hastily scribbled “tags”, they are beautiful works of art that transform the streets into an open air museum.

How awesome is it to be in a city where you get to see several amazing large scale artworks during a typical walk to the supermarket? I wish that more cities were decorated with artwork in this way – why have a boring grey wall when you could look at a vibrant riot of colour instead?

A must-do in Valparaiso is visiting Pablo Neruda’s house, La Sebastiana. Neruda is a phenomenal poet (his words give me goose bumps) and he was also a diplomat and a very important figure in Chilean history. He owned three houses in Chile and one of them is perched high on the hills in Valparaiso.

If you love Neruda and his poetry, you’ll find it fascinating to step into his recreated home and see how his artistic sensibilities carry over into the quirky furniture and items he collected. Even if you know nothing about the poet, the house is an architectural wonder and a delight to explore. The views of Valparaiso and the ocean from his study are so beautiful you might even be inspired to start spouting poetry of your own.

A Cheap and Tasty Meal is Never Far Away

You won’t go hungry here. Just on one street in the block or two surrounding our hostel we could find kebabs overflowing with meat and fresh veggies, huge chicken or beef burritos, a gourmet hot dog shop, a burger joint, a sushi restaurant and much more. There are a lot of restaurants to choose from, whether you are looking for high end artisan culinary treats or cheap and greasy drunk food. Try the Chilean dish known as Chorrillana, which is a heaping pile of French fries covered in eggs, beef strips, fried onions, cheese and sometimes sausage. It’s a heart attack on a plate and it comes in large portions – you will probably want to share with a friend.

There are bakeries on almost every block where you can find freshly cooked empanadas. If you like seafood, the wharf area offers the freshest catches every day. If you take the free walking tour you will be introduced to a guy who sells alfajores out of his house. These freshly-baked chocolate-coated cookies with dulce de leche filling are wonderful.

The Nightlife Scene Is Lively and Welcoming

Going out in Valparaiso is a lot of fun. There are lots of bars, the atmosphere is laid back and social and it feels very welcoming to backpackers. When you hit one of the clubs like Mascara there is a good mix of locals and travellers and you can easily meet Valparaisians as well as other travellers.

Be prepared to stay up late, though. On a typical night out in Chile most people don’t head out to the bars or clubs until at least one or two am. We tended to play drinking games in the hostel until this point, because if you went out too early the clubs would be empty. The party lasts until 4 or 5am, unless you carry on at an after party until 6 or 7am. Don’t expect to do anything productive the next day.

It’s got a Bohemian Vibe

This city has long been a hangout for Chilean artists, musicians and writers. You’ll see plenty of creative types with piercings, tattoos, guitars and colourful clothing hanging out in the parks. There are independently run bookshops, quirky local galleries, juggling street performers, boutiques run by local designers and live music venues featuring local Chilean bands playing everything from traditional folk to Latin fusion to pop. 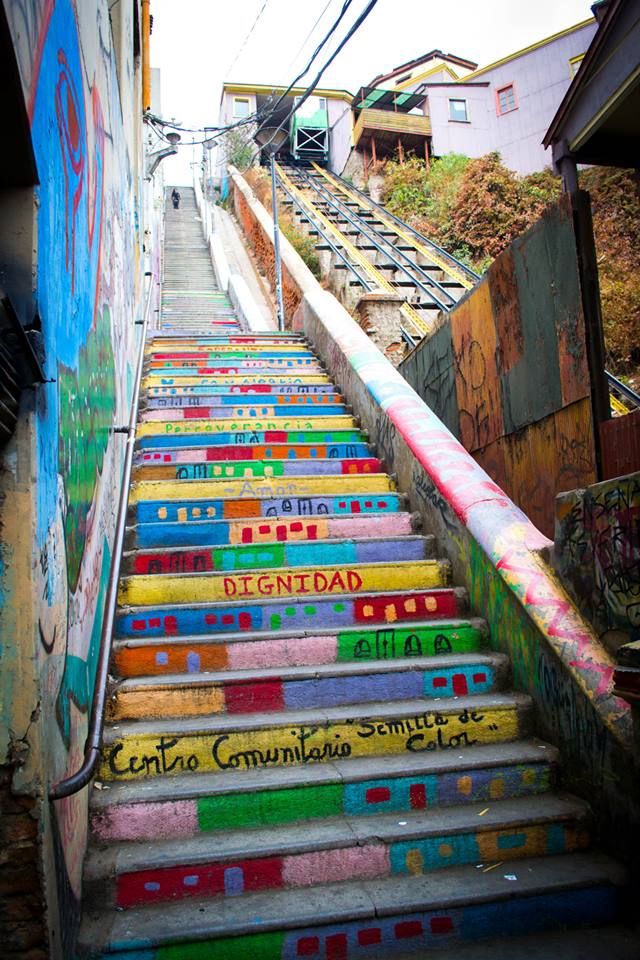 I could see myself living in Valpo and having a steady stream of interesting artistic events to attend at all times. If this is your scene, you will fit right in here.

The Ocean Views are Pretty Sweet

Take the steep stairs or ride one of the funiculars up into the hills and then turn around and gaze out over the Pacific. Not bad, eh? 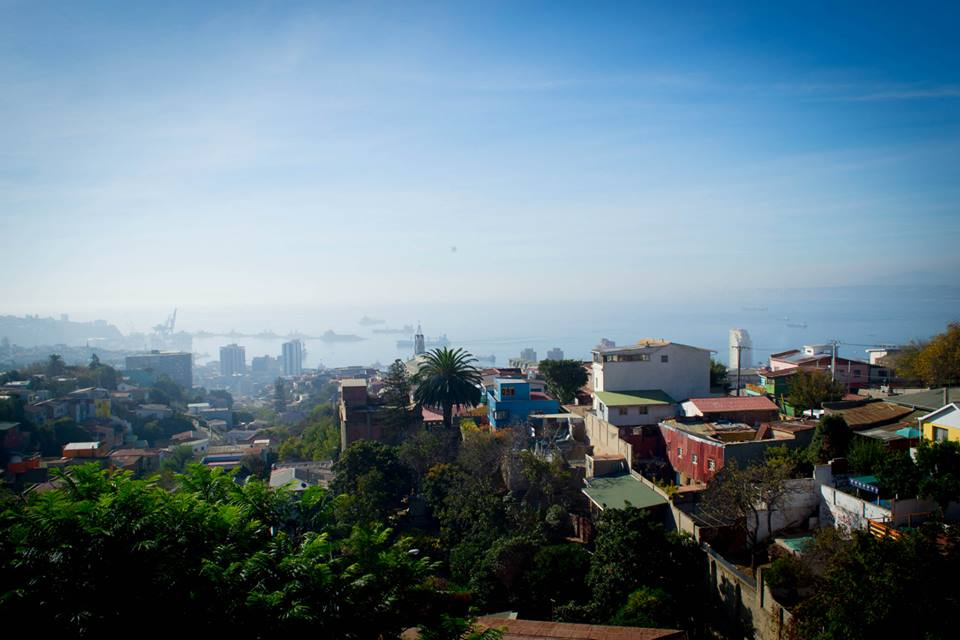 So, have you been to Valparaiso? What did you think of this gritty, rainbow-hued port? Let me know in the comments!