There are many great restaurants in Rome but there is only one that I feel I have a duty to recommend. The Trattoria der Pallaro won my heart early on. Upon arriving we were seated by a friendly Italian guy and asked one simple question, “Red or white?”.

This was the only question he needed to ask, as this Rome restaurant has no menu. “Here, you’ll eat what we want to feed you,” is the resturaunts slogan. The owner was an old Italian lady who wore a scarf around her head and a white apron, she could have jumped right out of the 1930’s. She spoke no English but she knew what you wanted, even before you did.

We were served a traditional Italian four course meal. Our first course was the antipasta, a vast collection of fresh meats, breads and olives accompanied by lentils. The second was a pasta dish, simple but great featuring a tomato sauce with lots of cheese.

Then came the meat course and as there was 2 of us we were given a plate of roast beef and a plate of chicken with a spicy coating. I honestly could not decide which was the best but they were without doubt the top two meats I had ever tasted. They were accompanied by homemade potato chips, mozzerella and green beans and at this point I knew we were onto a winner. Dessert was a homemade lemon tart served with freshly squeezed mandarin juice.

The Trattoria der Pallaro was traditionally a place were workers ate. The owners brother was a chef at a local hotel and the leftovers would be sent over and served at a fraction of the price. Of course this is not the system anymore but the sentiment remains the same, great homemade food at a fraction of the cost of most restaurants in the city.

All of this cost just 25 Euro per person. (not the cheapest in the world, but crazy cheap compared to other Rome restaurant prices) Since we had a second jug of wine our bill was bumped up all the way to 26 Euros each.  I was more than happy. 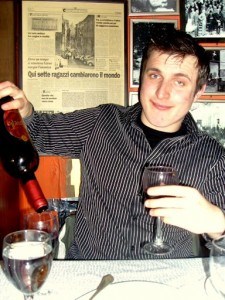 After a few days of trying to find another restaurant in Rome with anywhere near the value for money as Trattoria der Pallaro we decided to go back. We walked from our hotel down towards the restaurant when we realised it was not wehere it was supposed to be. We must have walked every side street in the area and could not seem to find it. Just as we were about to give up it suddenly appeared.

I was like a kid at Christmas. The same waiter, recognising us from a few days before didn’t even ask the question, he proceeded to bring out red wine and our first course. He told us the pasta course was the same as we’d had on our previous visit so he would make another kind especially for us. When it arrived he handed Kelly the finest bowl of freshly prepared well presented pasta I have ever seen. He then handed me a giant mixing bowl with the rest of it in and proclaimed, “You get the big bowl”. Our bill came to 27 Euros each that night, I would have been happy to pay double.