When you expect everything in a foreign country to be like it is back home, it’s easy to think that people from other cultures are useless, stupid or ignorant when they don’t behave the way you want them to.

Over the years I’ve learned that having that attitude is pointless and it only makes traveling not fun. The story of the angry American guy we encountered in Belgrade, Serbia is a great example of why.

On a beautiful spring day in Belgrade we went on a historic walking tour and then ended up having lunch with a few people from the tour. One of these people was a 30-something guy who was loud, arrogant and obnoxious (of course all Americans are not like this – and there are people like this from every country).

We ate at a local Serbian restaurant and the owner was a lovely old man who didn’t speak very much English but did his best to help us figure out what to order. He was fun and welcoming and greeted us with a big smile.

We ordered some delicious homemade sausages and lots of other hearty, filling and tasty traditional Serbian dishes.

At the end of the lunch, the owner brings us the bill, which is all listed on one printout (as is common in many European countries). The bill is in Cyrillic, so Lee and I just look at the original menu, remember what we ordered, match it up with what is on the bill, add up the prices of the dishes that we ate and put the appropriate amount of Serbian dinar on the table. It was absolutely no problem at all and it took us 2 minutes. However, the American guy wasn’t having any of this.

He starts complaining about how this is “terrible customer service” and whining that he can’t figure out the bill because it’s not in English. The old Serbian guy is really patient with him and comes over to help us, looking at the bill and trying to translate things into English. The American guy is insisting on separate bills for everyone, starting to shout and getting really angry. He is saying to the rest of us at the table that the Serbian guy is stupid. “What is so hard to understand?” he moans, “I shouldn’t have to figure out this bill, this is his job!”

I try to explain to him that restaurants work differently in Europe than in the USA and that it’s not bad customer service, just a different system. I tell him that he knows what he ordered and all he needs to do is add it up and pay the right amount. No matter what I say, he still doesn’t get it.

He gets even more fed up when he cannot pay with credit card (at a tiny local restaurant that still uses an old school cash register). Meanwhile, another couple at our table don’t have enough money for their meal in Serbian dinar. They are trying to pay in Euros for some reason. Bless his heart, this poor old Serbian guy with infinite patience actually takes the Euros, goes across the street to the money changers and turns them into Dinars for this couple! 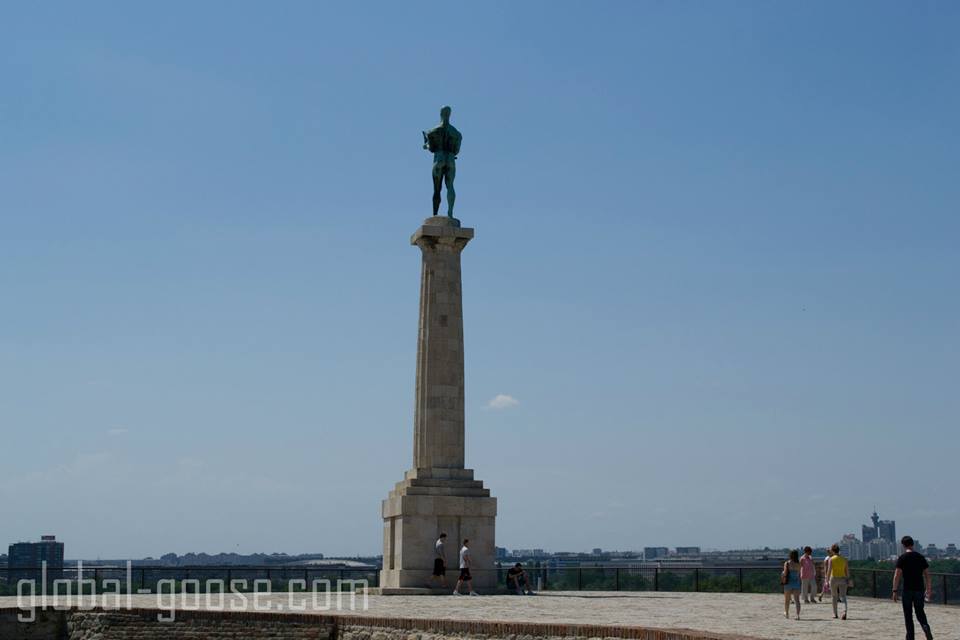 Meanwhile, Lee and I are sitting there for about 15-20 minutes while this is all going on… with our money already on the table and shaking our heads at how everyone else is acting. When all of the payment fiasco was finally sorted out and everyone parted ways, I felt so bad for the restaurant owner. He had welcomed us so warmly, given us such a delicious home cooked meal and done everything he could to help us – and he was treated so badly. As we left, I made sure to thank him profusely and Lee patted him on the shoulder and gave him a look as if to say, “Sorry about these dickheads, mate.”

Yes, having the bill for the meal all together on one sheet and in a different language was a little bit more difficult than it would be if you were eating at The Keg or Tony Romas. However, when you are travelling you have to adapt to the situation and figure out a solution. Our dining companion could not adapt and soured a nice meal with his inability to accept another way of doing things.

I’m not trying to boast about what good travellers Lee and I are… we are not perfect and we sometimes get tired and fed up when traveling too! I just think this is a great example of why being open minded and adapting to your environment is so essential.