If you are planning a stopover in Riga, I guarantee you will be charmed by the lovely and historic Latvian capital. It’s hard not to fall in love with this city. 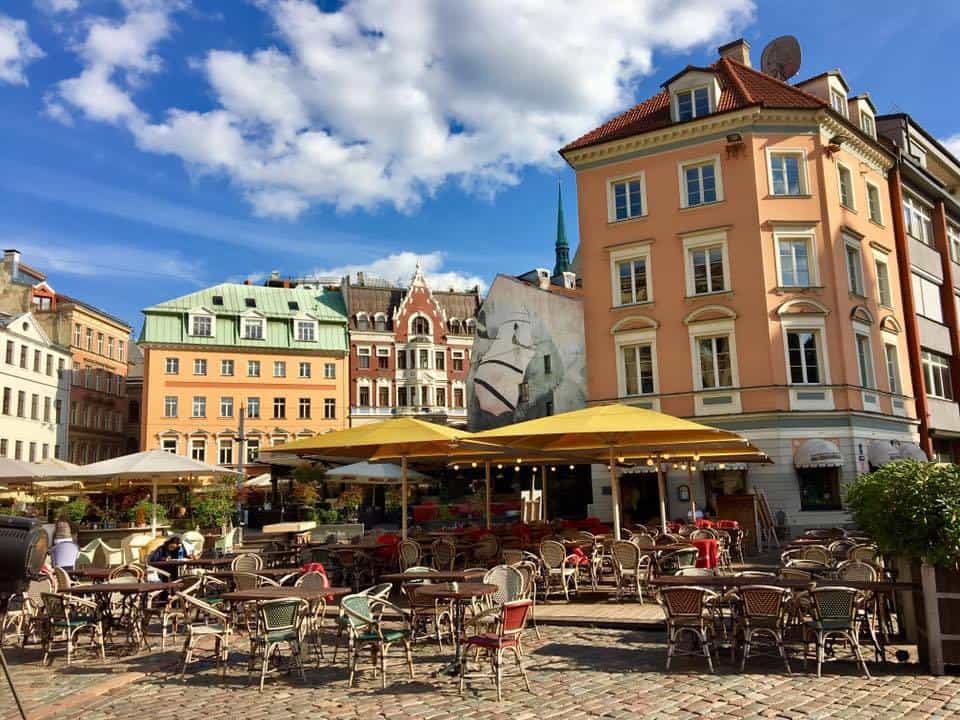 We ended up having to do a stopover in Riga on our flight from the UK to the Republic of Georgia, so we decided to extend the stopover and spend a couple of nights there. There’s a lot to do in the Latvian capital and this little taste left us wanting to come back for more.

Riga can be reached on a cheap flight from the UK and it’s only about 3 hours away, so it’s a great option for a weekend getaway. The largest of the three capital cities in the Baltic countries, it seems quiet and reserved at first but when you look closer you’ll find vibrant bars, cool restaurants and an abundance of culture.

When it comes to things to do in Riga during your short visit, you won’t struggle to get ideas. Although this city is small enough to walk around easily in one day, there is a ton of interesting things to keep you busy. Here are a few of the wonderful things in Riga that we discovered on our short visit.

What To Do on a Stopover in Riga, Latvia

This place doesn’t look like much from the outside, but when you enter you will descend a staircase into a cavern-like basement. It’s like a Tardis – much bigger on the inside. The vaulted ceilings and low lighting make you feel like you have stepped back in time into a Medieval tavern. This space used to be a wine cellar and part of it dates back to the 13th century. It is one of my favourite places that we dined at during our stopover in Riga. 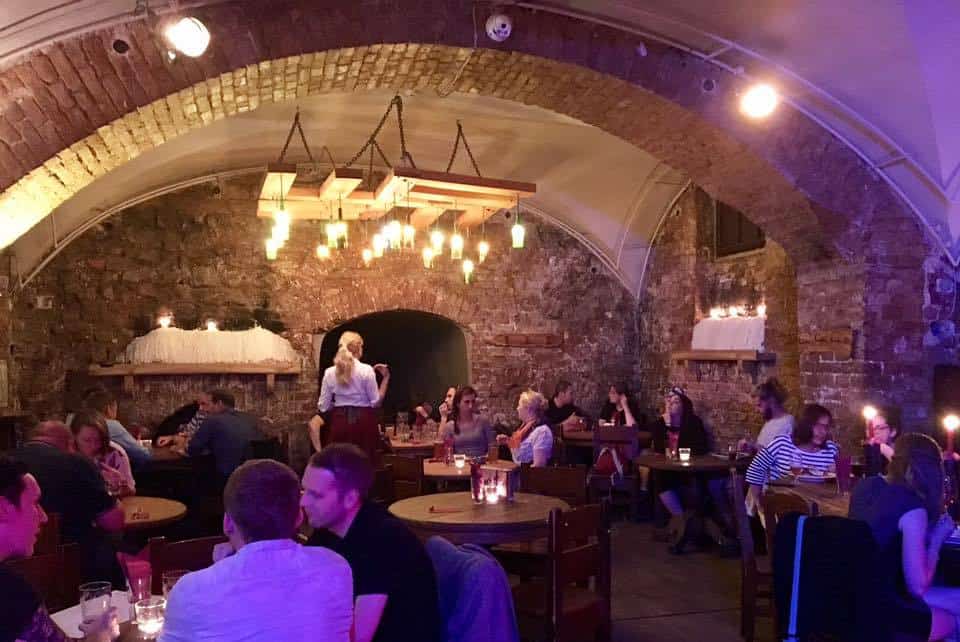 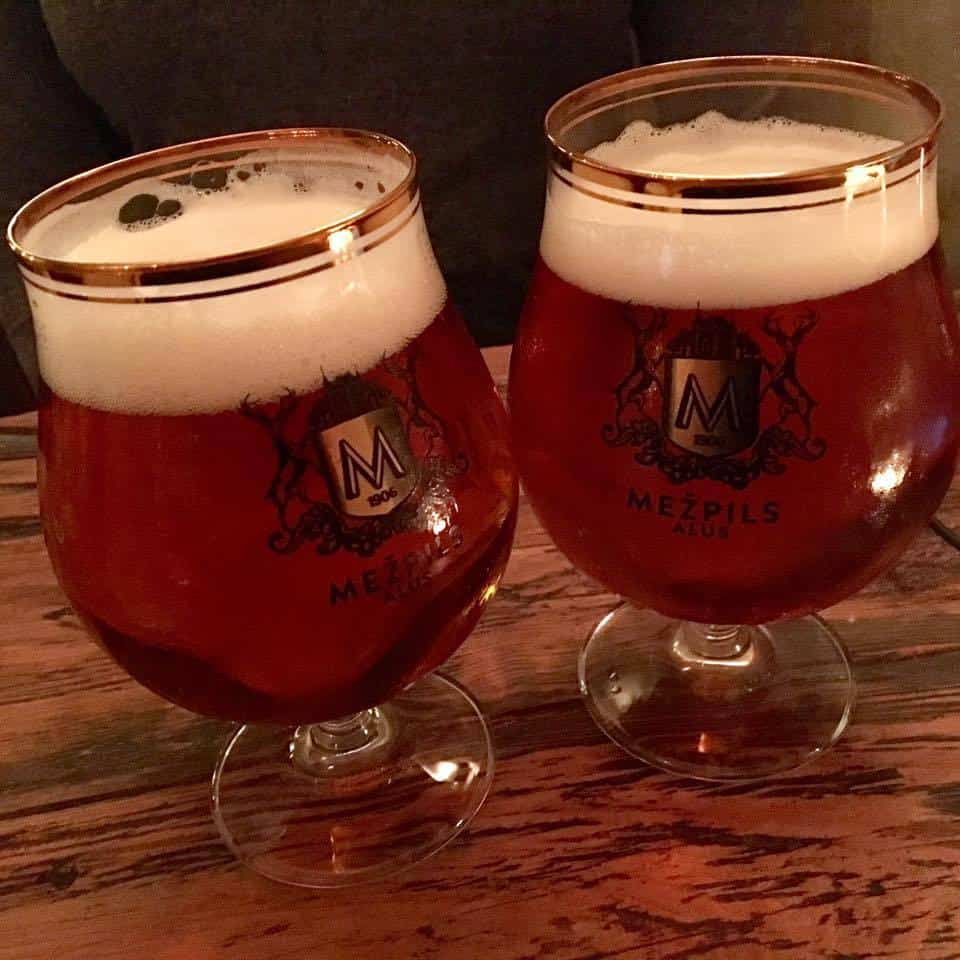 It was packed when we arrived and the sounds of live music, laughter and chatter bounced off the walls. We tucked ourselves into a little table in the corner and soon we were feasting on huge platters of traditional Latvian food and sipping from big curvy glasses of beer. They have the best selection of beer in Riga – 28 different beers on tap.

We would have stayed for more, but the combination of the beer and the fact that we had been on an overnight flight left us nearly falling asleep face-first in our meatballs. We headed home to get some sleep so we could explore the city more the next day.

Here’s a very cool video interview with the founder of Ala Pagrabs. He wanted to create a space where folk music could be celebrated and enjoyed.

This style of art and architecture, popular between 1890 and 1910, is stuffed to bursting with buxom, topless women, swirling lines, ripe fruit, curving vines and lots of luscious nature-inspired elements. The flowing lines and curves were seen at the time as celebrating freedom from rigid artistic tradition. 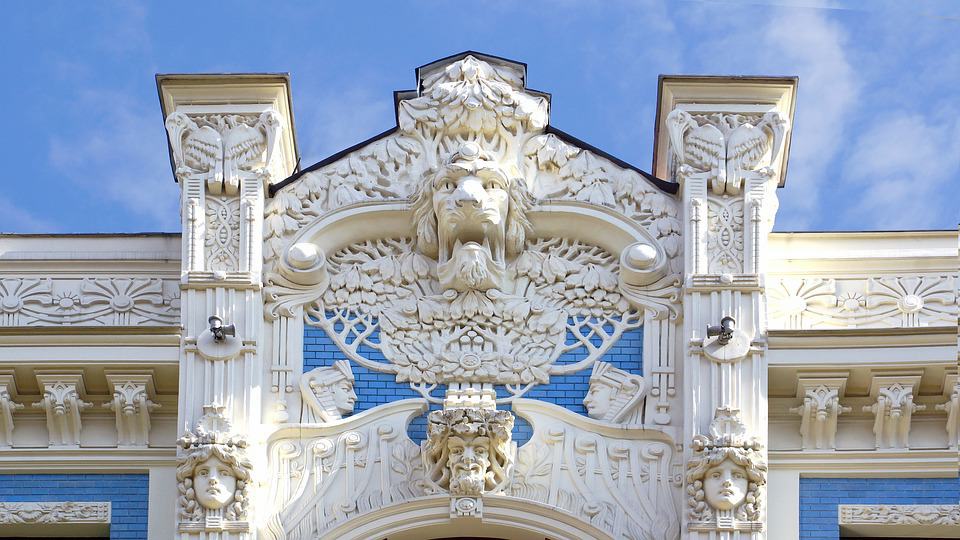 Riga was having a financial boom right around the time that these twisting, organic lines and nude ladies were coming into fashion, which is why it is considered one of the major Art Nouveau hotspots of Europe.

If you are an art and architecture geek like me and you want to see a fantastic showcase of Art Nouveau, head to Alberta Iela (Albert Street). The street is lined with residential homes, shops and restaurants all resplendent with open-mouthed gargoyles, twisting stone grape-vines, elegantly carved faces and curvy female figures. 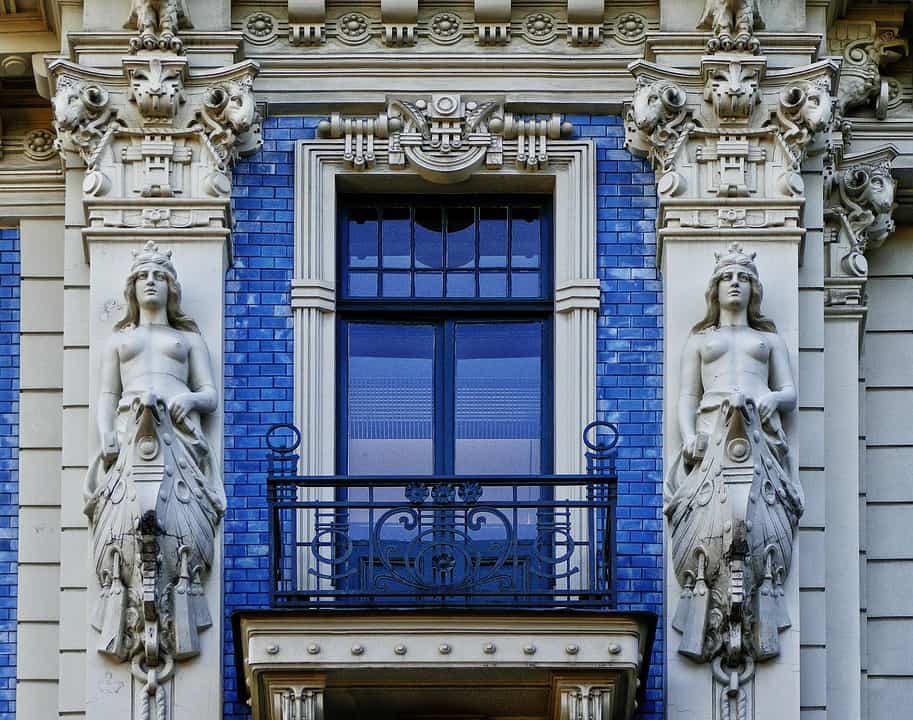 See if you can spot the satyr phoenix-women standing guard at Alberta Iela 2a, or the lion heads with snake tails at the Riga Graduate School of Law on Alberta Iela 13. Also, make sure to check out the Art Nouveau museum, if only to get a glimpse of the amazing staircase inside. 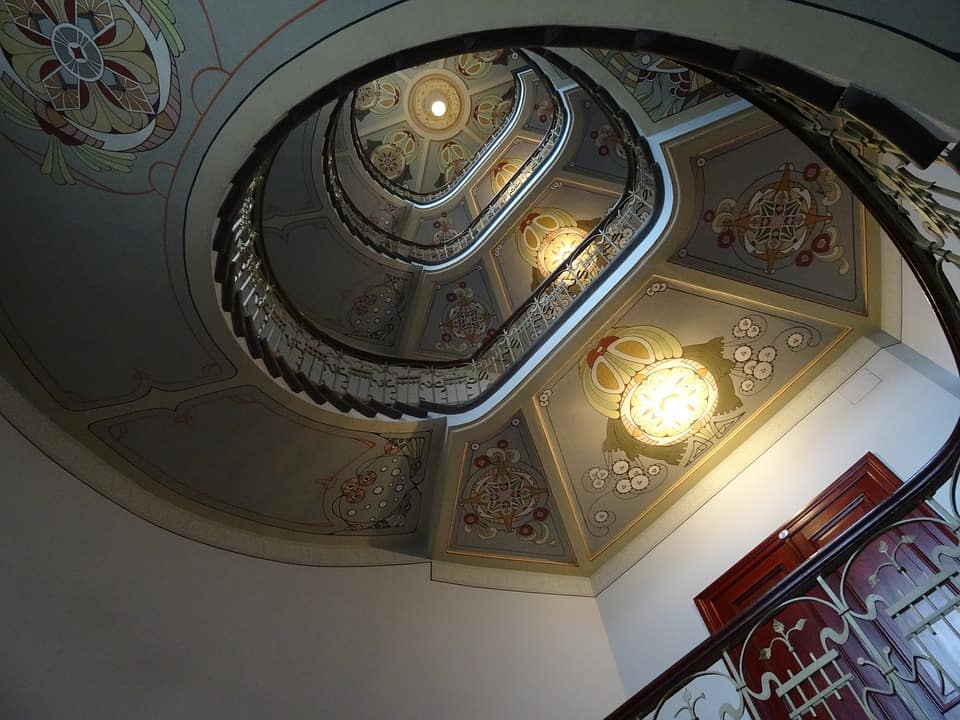 If you want to learn more about what you are looking at, consider this free self guided walking tour of the Art Nouveau architecture.

The War Museum of Latvia

Established in 1916, this is the largest military history museum in the country, containing more than 25,400 items organised into individual collections and chronological exhibits. 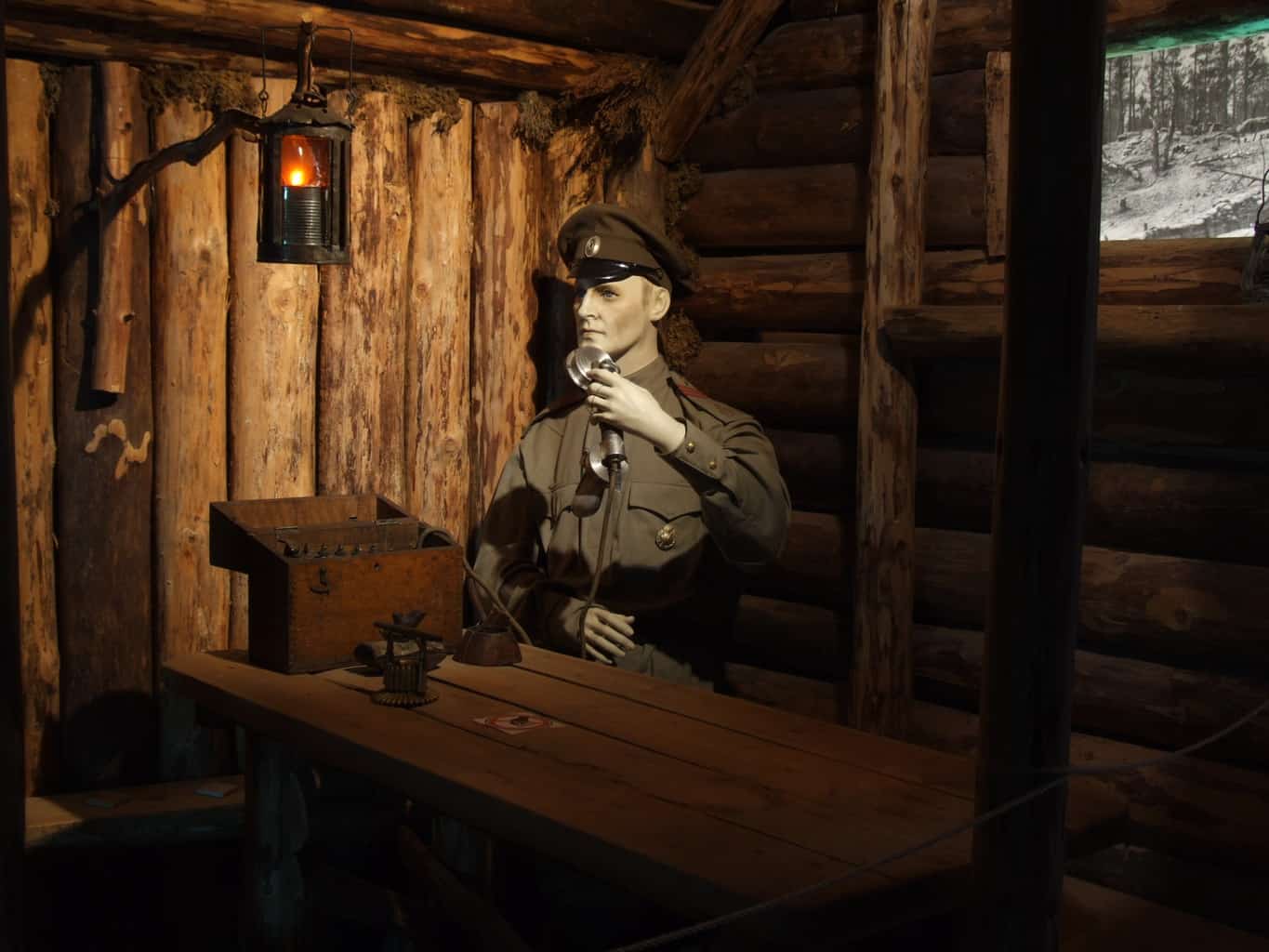 If you are a history buff, it’s certainly worth a look. There are exhibits dating back to the 9th century and all the way through history, Latvia during the Soviet Occupation and the Third Awakening.

And now I know… pic.twitter.com/fgSf0lwuDg

How can you read that title and not want to know? What DID the Latvia riflemen eat and drink in the First World War?

(No spoilers. If you want to know, you’ll have to go to Riga for yourself.)

If you know me, you know that I absolutely love rooftop bars. I fell in love with them in cities like Bangkok and Delhi where they offer a chance to rise above the noisy, smelly chaos of the streets and see the city from above as a calmer and more cohesive whole.

Although Riga’s streets are calm and elegant and there’s need to escape from them, I still love the concept of drinking in a bar that is high above the skyline, gazing out at the horizon and pointing out attractions and interesting buildings from my perch.

The Skyline Rooftop Bar at the Radisson Hotel is the perfect spot to do this in Riga. The drink are not cheap, but you’re paying extra for the lofty location. The view is pretty damn sweet.

One of the items that I saw frequently show up on “must-do in Latvia” lists was to drink Black Balsam. I’m always up for trying the local cuisine, so I made a point to drink it during our stopover in Riga.

This strange Latvian herbal liqueur is made with 24 different herbs, flowers, roots, oils and berries mixed with pure vodka (it’s 90 proof). It is served in a range of cocktails and can also be served warm in coffee, tea or black currant juice.

The traditional recipe is considered to be a good cold remedy and that’s exactly what it tastes like – cough syrup. It’s pretty damn strong too… after one cocktail I was staring out at the Riga skyline with a solid buzz going on.

Legend has it that Empress Catherine the Great of Russia became ill during a visit to Latvia in the 18th but was cured after drinking Riga Black Balsam. I think she just got so drunk that she didn’t give a shit.

Check Out the Cool Public Art

I don’t know what it is about Riga, but it seemed to have some of the best public art of any city I have seen.

The sculptures that I saw throughout the city were unique, interesting, thought-provoking and really added a sense of whimsy to the public spaces. They were one of the highlights of this stopover in Riga.

To give you an idea of the cool and creative art you will find while exploring Riga, here’s a very cool video:

Dine at the Medieval Restaurant

I’ve always been fascinated by time travel – but of course as far as I know it’s impossible. However, when I saw the medieval restaurant I got excited by the idea that I might be able to pretend – just for one night. 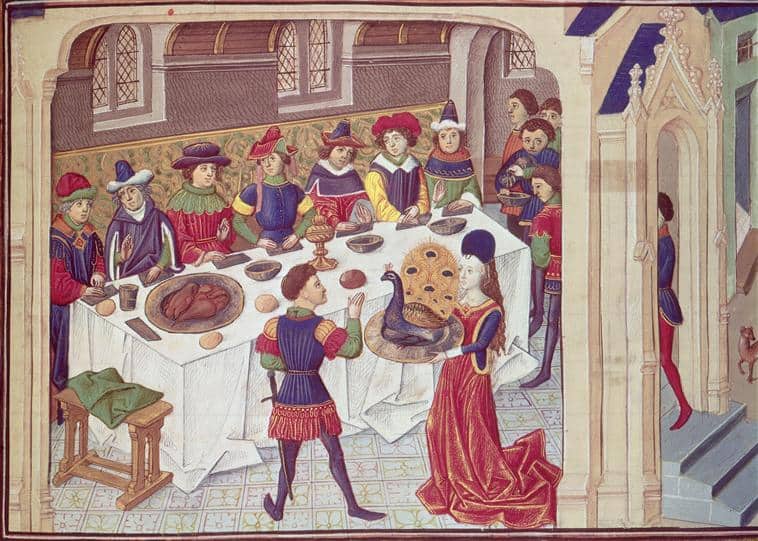 Rozengrals is a restaurant that dates back to 1293 and strives to recreate the medieval dining experience as much as possible. The tables are candle-lit, the servers are dressed in medieval garb, you are serenaded by roving minstrels during your meal and all of the dishes are from authentic recipes from the middle ages.

The menu gave a little history for every dish – which I found myself reading with fascination. (I cheated by using the flashlight on my cell phone to read it in the dim candlelight, how anachronistic!)

Some of the most interesting dishes included:

Okay, maybe I am a geek but eating a recipe that is hundreds of years old fascinated the hell out of me.

The total immersion is so effective that I heard someone ask one of the servers whether or not the restaurant had a bathroom. I suppose they expected the toilet to be a simple hole in the ground with a wooden seat. Fortunately, they were not that dedicated to historical realism.

As we were walking back to our apartment from the restaurant, stuffed to bursting with delicious food and feeling warm and happy from the wine, I thought about the meal we had just had. Lee and I, an average couple (in the Western World), just dined on food that only the highest levels of royalty and nobility would have been able to experience in the middle ages. Not only that, but we enjoy such luxuries as electricity and running water every day.

As much as we romanticise the past, I really do love living in the time we are in now.

Gone back in time. #Riga pic.twitter.com/lDjD8rdfWX

One Last Tip: Try the Blueberries 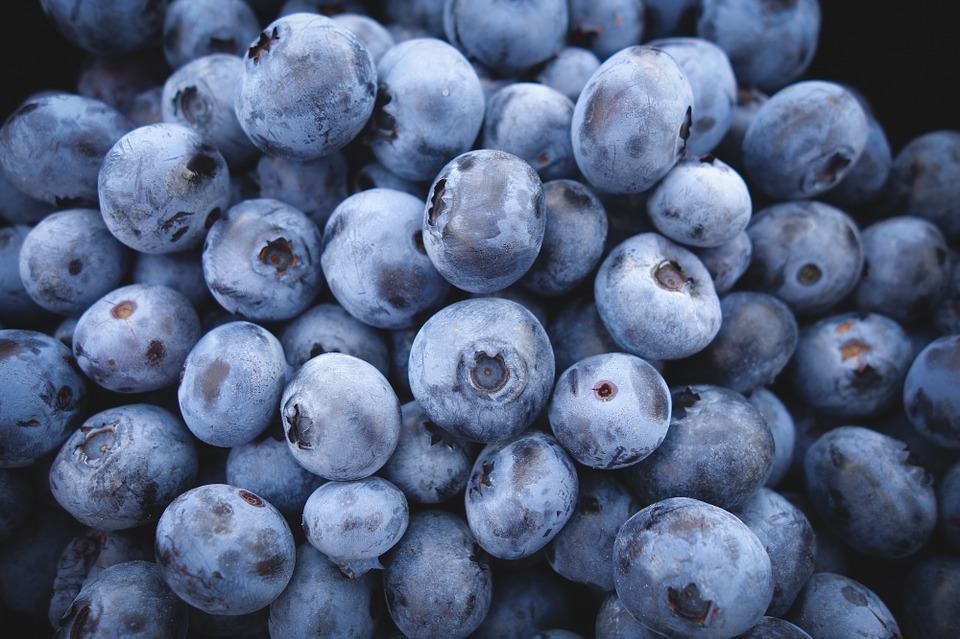 Oh my god. The blueberries. I don’t know if we visited during blueberry season (we were there at the end of August) but I’ve never tasted blueberries more fresh, flavourful and juicy. They were like big, plump, purplish-blue candies that I couldn’t stop popping into my mouth.

I would buy a plastic cup filled with them at a corner shop and I would have eaten them all by the time I reached the end of the next street. Most of my time on our short stopover in Riga was spent with purple-tinged fingertips… they really were a delight. 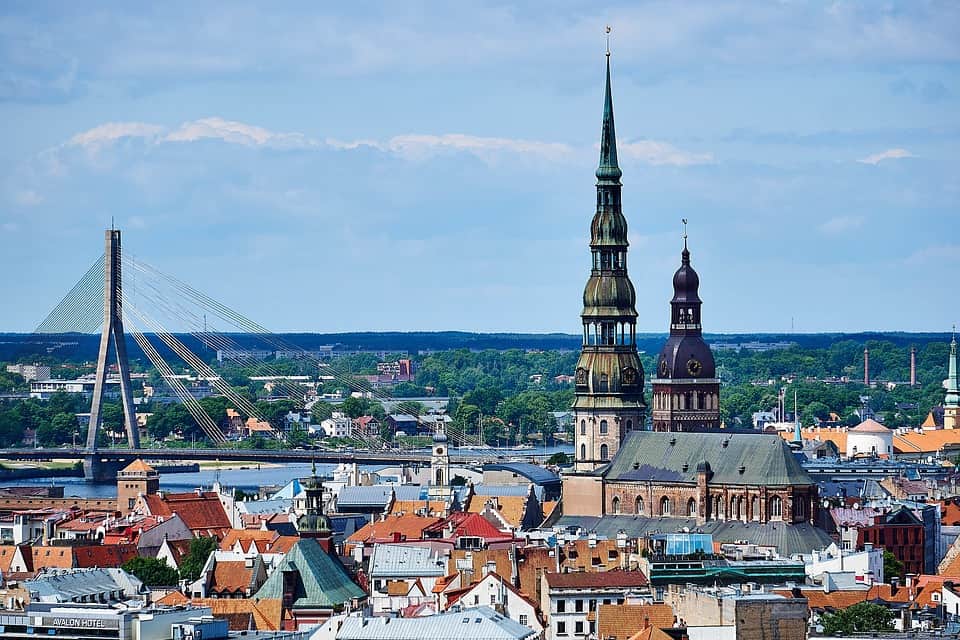 These are just a few of the wonderful things that you can do on a stopover in Riga. There’s a lot to do in this great Baltic city. Anything we missed? Let us know in the comments!