Sometimes while traveling the world I will end up following a series of “why nots” and suddenly find myself in an absolutely bizarre and surreal situation. This has happened a few times before, but no circumstance has been more totally ridiculous than the night that I became a Sri Lankan Beauty Queen.

Lee and I were staying in Negombo, a beachside town near the Sri Lankan capital of Colombo. It was our last couple of days in Asia before heading back over to Europe, so we had spend our accumulated Agoda points on a lovely beach side resort as a bit of a treat.

While I was doing some writing back at the hotel one afternoon, Lee went for a walk down the beach. He happened upon some sort of a festival with games, music and other entertainment. Before he really knew what was happening, he was being chosen from the crowd, blindfolded, given a huge stick and instructed to beat the living daylights out of some hanging clay pots. 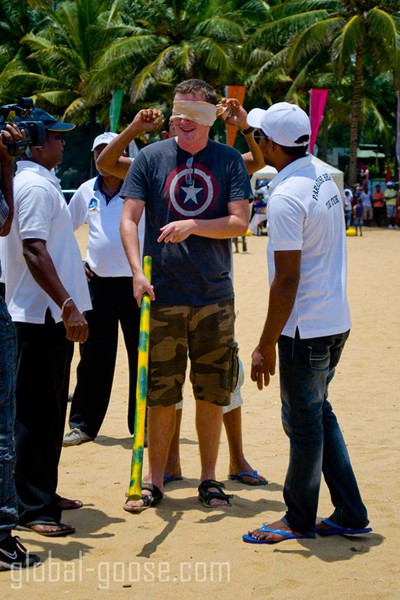 He did so with so much enthusiasm that he won second prize in the pot-smashing competition and came back beaming, telling me that we had to go back to the festival in the evening to pick up his prize.

So later on in the evening after we had finished working, we walked down the beach again and back to the festival. By this time a stage was being set up and people were starting to gather around.

As Lee started playing cricket with some local boys, I went up to the information booth to find out how to claim his prize. The organizers told me that we had to wait until the award ceremony after the beauty competition, which by the way, I should enter.

I laughed, thinking that they were joking. Me in a beauty competition? I look more like a lazy backpacker than a beauty queen most of the time and I’ve never done anything remotely beauty-pageant like.

However, they kept persisting, smothering me in compliments and promising to dress me up and do my makeup until I finally gave in, figuring it would be good for a laugh. The makeup artist took me to her tent, where she proceeded to dress me in a traditional Sri Lankan outfit, put makeup on me and stick pink flowers in my hair.

It was a strange feeling being fussed over in this way, but I have to admit it was quite a lot of fun and a bit of an ego boost. After I was all dressed up, we did a little bit of a photo shoot on the beach, where I pretended to be a glamorous model rather than the dorky Canadian that I really am. I think I managed to pull it off. 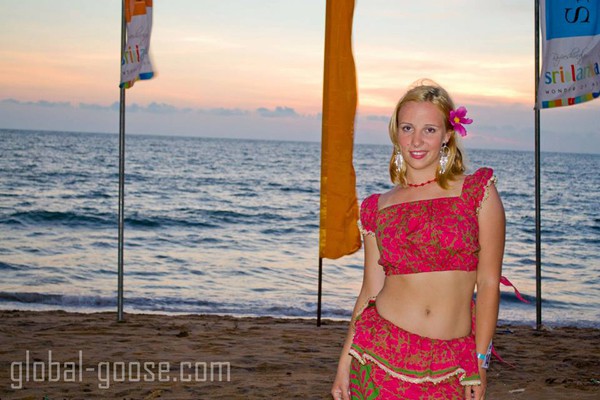 The beauty competition contestants were all dressed in similar outfits to mine and as the crowds started to gather, people would approach us and ask if they could take photos with us. We also posed for numerous photos as a group and after a while, my face started to hurt from constantly smiling in everyone’s photographs. After a lot of posing with the other contestants (who looked to be a mixed of locals and confused travelers just like me) the sun had gone down and the stage lights were up. We were ushered away to the edge of the stage and told to where to walk, where to pause, when to look at the judges and how to introduce ourselves when we got on stage.

As we stood in a line onstage, the host of the evening went through each contestant asking them about where they were from and what they thought of Sri Lanka. Except for the Sri Lankans in the competition, who he skipped over while saying, “You’re from here, we don’t need to talk to you.” It was difficult to contain my “WTF?” face behind my beauty queen smile.

Then followed the awkward questions for me, such as whether I was interested in marrying a good Sri Lankan boy. I answered that I had a boyfriend. The host looked hurt and asked me, “Don’t you find Sri Lankan men handsome?” I didn’t know what to say at this point, so I fumbled through an answer that came out something like, “Yes they are, but not as handsome as my boyfriend,” somehow managing to insult an entire nation of young men by accident. I’m sure that is the moment where I lost the popular vote.

After about ten more minutes squinting in the bright stage lights, it was time for the winners to be announced. I ended up taking second place behind a gorgeous Russian girl, so I really can’t complain. I received my sash and my prizes of jewelry and makeup. (Although the makeup was suited to a much darker complexion than mine). Then followed a few hundred more photos of me with random Sri Lankan guys and their daughters, before I changed out of the glamorous outfit and back into my scruffy backpacker clothes.

I tried to give them back the outfit, but they said it was for me to keep. I’m sure I will wear it all the time. 🙂 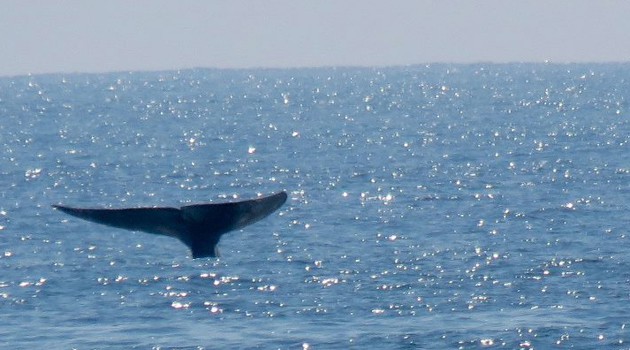