The Songkran Festival represents the Thai New Year, transformation, washing away the old year and getting a clean start.

Thai people also clean their houses, visit their relatives and give offerings to monks. However, the main action you’ll see in the streets is people throwing water at each other. Here on Kai Bae Beach on Koh Chang the Main Street was busy with sopping wet revelers hurling buckets of water or shooting water guns at each other. Young and old. Thai and Farang (foreigner). No one was safe and everyone was acting as giddy and playful as a child. It’s a lot of fun. 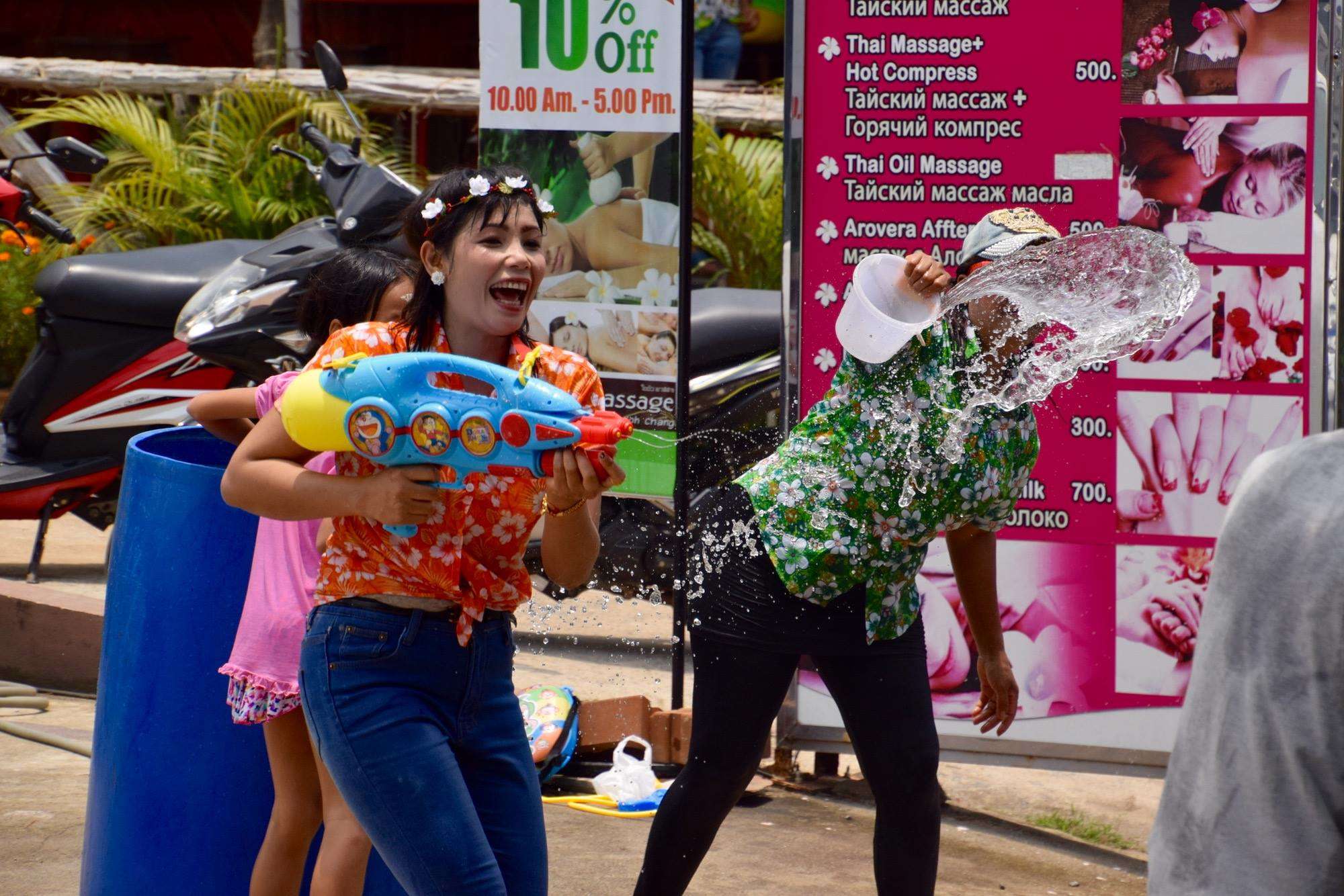 The Songkran Festival comes at just the right time of year when the temperature is incredibly hot and someone pouring a bucket of cold water over your head is actually something you might welcome. After all, you’re already soaked in sweat so why not? At least for a moment you can remember what being cold feels like.

This was the first time Lee and I were able to experience Songkran, so we were excited. Plus, we got to celebrate it on the gorgeous island of Koh Chang. 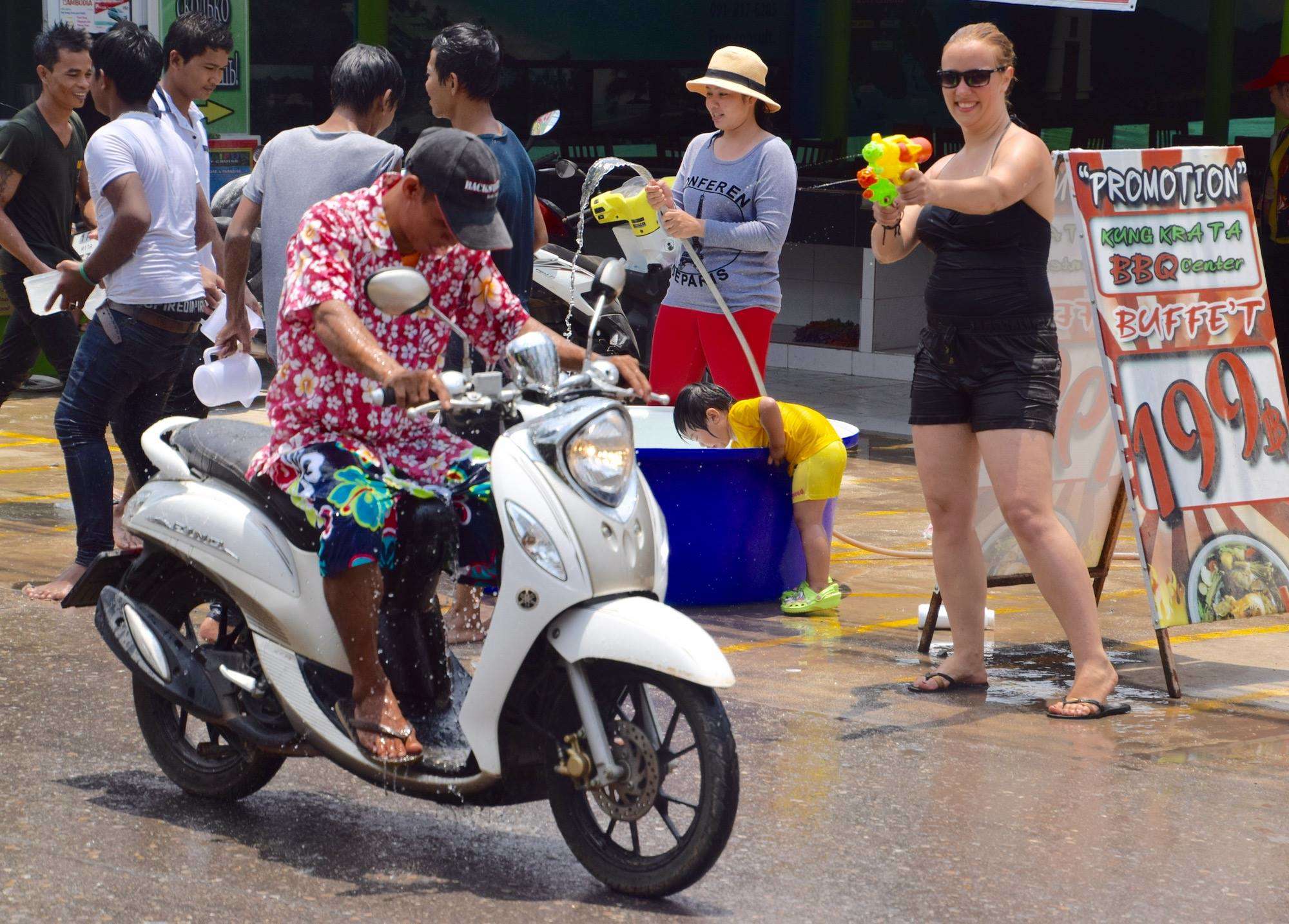 Joining in The Songkran Celebrations

We bought squirt guns from a local shop for 50 baht each ($1.40) and joined in the fun. There were several shops and restaurants that had large basins or rain barrels filled with water where everyone could fill up their water guns.

People riding in tuk tuks, motorbikes and cars had to run the gauntlet down the street as water-gun assassins from each side tried to spray them.

At one point I noticed a little boy standing next to me without a gun, looking apprehensively at the chaos around us. I could tell he wanted to join in, so I offered him my water-gun. He didn’t seem to speak English, but I could tell he was happy to be part of the fun. 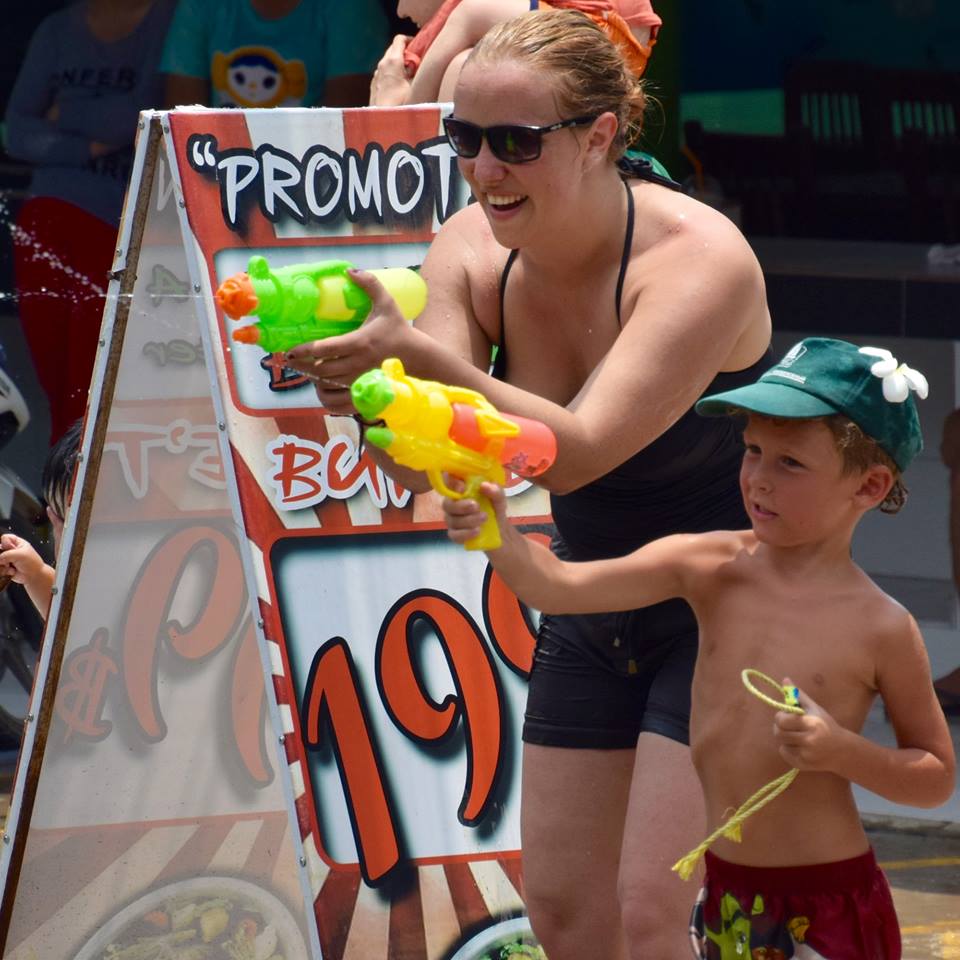 Of course, as anyone with a little brother could have probably guessed, the first thing he did was to spray water at his sister. So, I had to give her the other gun so she could fight back – it was only fair.

The two of them joined in the water battle while I chatted to their mom and found out they were Russian and staying on Koh Chang for a month. I left the water guns with them so that the little ones could join in on the fun.

We took a break for red curry rice and watermelon juice at a cafe while we watched the chaos continue on the streets. 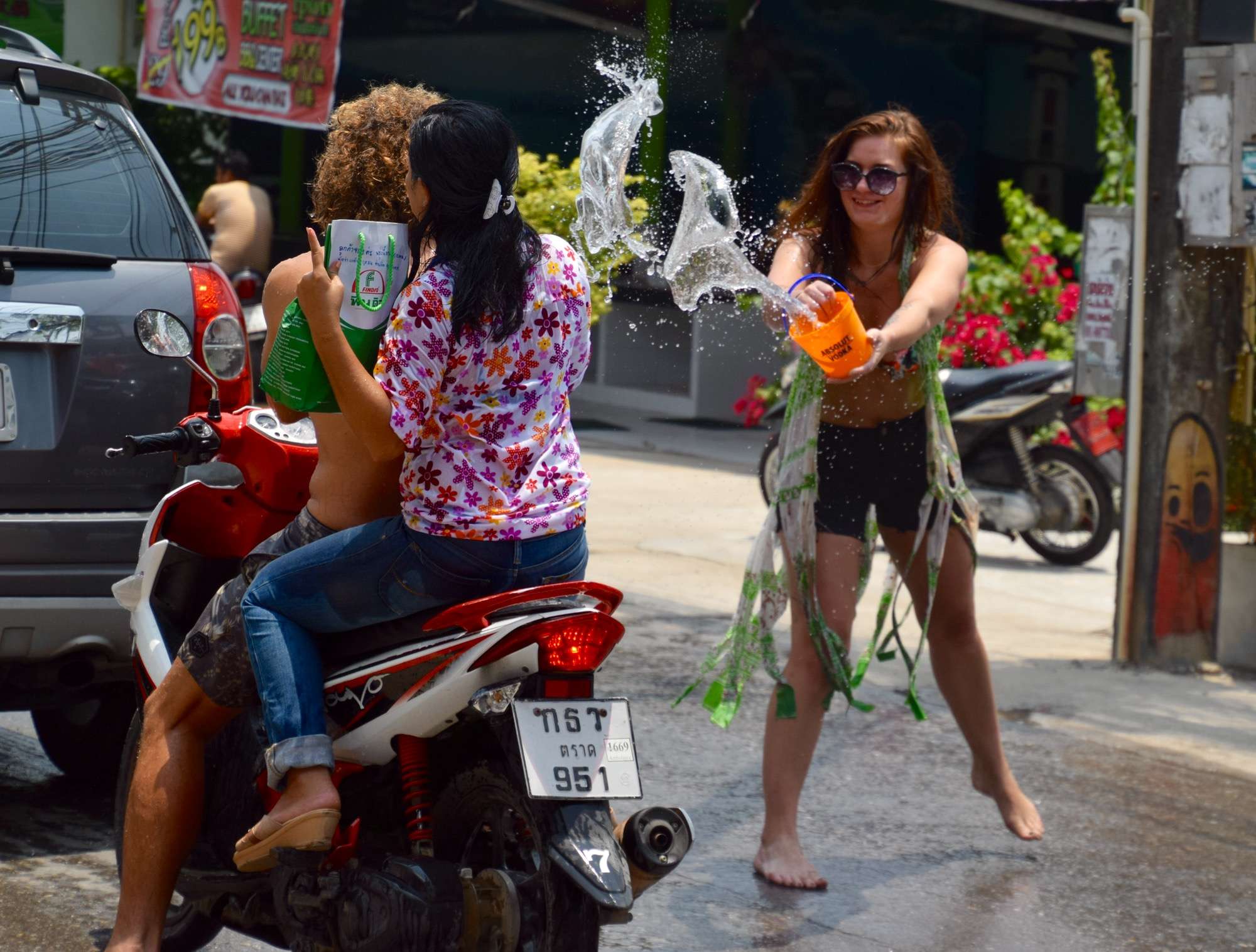 The attitude of Songkran is so relaxed and fun – much less intense than the Holi festival in India that we attended only a few weeks ago. I don’t know if this was because we were on one of the islands rather than in Bangkok or Chiang Mai – it might be a bit crazier in the larger population centres. I loved how much fun it was to take part in a lighthearted playful water fight with a bunch of strangers.

Songkran lasted for a full three days. It was an absolute blast on the first day but after a while it starts to get a bit old. You start to want to be able to just go out for a walk without getting absolutely soaked. Also, some people carried on with the splashing into the evening, which I think is traditionally a Songkran no-no.

On a ride back from White Sand Beach to Kai Bae Beach on the third evening my sympathetic taxi driver let me sit up front with him so I wouldn’t get wet. From the older generation, he was shaking his head at the people who were still throwing water at 8pm. “This no good.” He said, “6pm, 7pm, Songkran finish.”

The trouble is that by 6 or 7pm people have already changed out of their wet clothes into dry ones and are heading out for dinner. You don’t want to get splashed again and fear for your wallet and phone, then have to sit for the rest of the evening in damp clothes. It wasn’t just foreigners, it was also a lot of the young Thais who didn’t seem to want the fun to end.

If you can stand the intense heat, I would absolutely recommend visiting Thailand during Songkran. It’s a great opportunity to wash away the old year and celebrate a fresh new start – and what better way to wish happiness and goodwill to a stranger than to squirt them right in the face with a water gun?

Have you been to Songkran in Thailand? Would you like to take part in this mega water fight? Let us know in the comments.