The Salar de Uyuni is one of the most impressive sights in South America and if you are visiting Bolivia it is an absolute must-see. It is one of the most surreal and bizarre landscapes I have ever seen and it makes you feel like you are on a completely different planet.

We took a 3 day, 2 night tour through the Salar de Uyuni in a 4×4, starting in Bolivia and ending up in Chile. Read on to find out about our adventures, as well as what to expect when you book your trip.

What is the Salar de Uyuni?

The Salar de Uyuni is the largest salt flat in the world, located in southwest Bolivia. In prehistoric times, this landscape was an enormous saltwater lake called Lake Minchin, surrounded by mountains with no drainage outlets. When the waters of the lake dried up over the years, the salt within them had nowhere to go. The enormous salt deserts were left behind, the Salar de Coipasa and the bigger Salar de Uyuni. 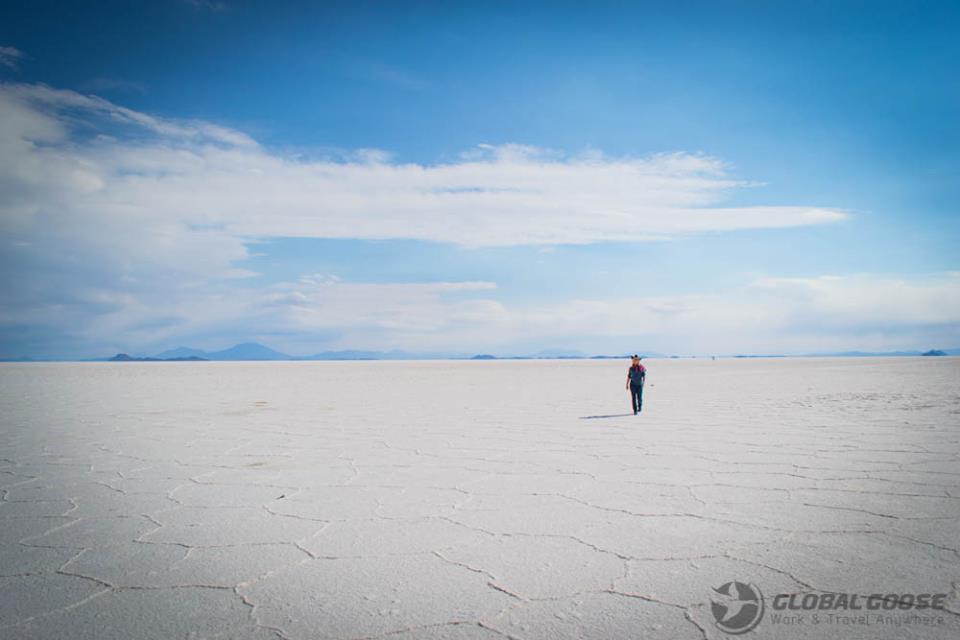 So what are we actually walking on here? On the surface of the Salar, there is a sold crust of salt that is anywhere from a few dozen centimetres to a few meters thick. It’s flatter than a Saskatchewan prairie and whiter than a Newfoundland blizzard. Underneath that, there is Lacustrine mud – which is saturated with salt, sodium chloride, magnesium chloride and lithium chloride. The Salar de Uyuni is estimated to contain 10 billion tonnes of salt – which is easy to believe when you are squinting your eyes and staring out over the incredible vastness of it all.

When I was looking at the different options for salt flat tours while we were in Potosi, a tour guide told me to wait until we had reached the small village of Uyuni to book the tour. Although you can make your booking in Potosi, the tourist agents there will take a commission just for calling up and reserving you a place. Instead, the best thing to do is to take the bus from Potosi to Uyuni, then book your tour when you arrive. The tour prices were significantly different (900 Bolivianos compared to 750 Bolivianos for the same tour).

When we arrived in Uyuni, we booked a tour with Thiago Tours. We have heard stories about shady tour operators and drunk 4×4 drivers, but we didn’t have any trouble with the tour that we booked.

They were friendly and helpful and the tour agent at the office spoke good English. The 3 day, 2 night tour was 750 Bolivianos each, which included all food, transport and accommodation. The only expenses on top of that were 30 Bolivianos each for admission to Incahuasi Island (optional) and 150 Bolivianos each for our entrance to Eduardo Avaroa National Park (required). 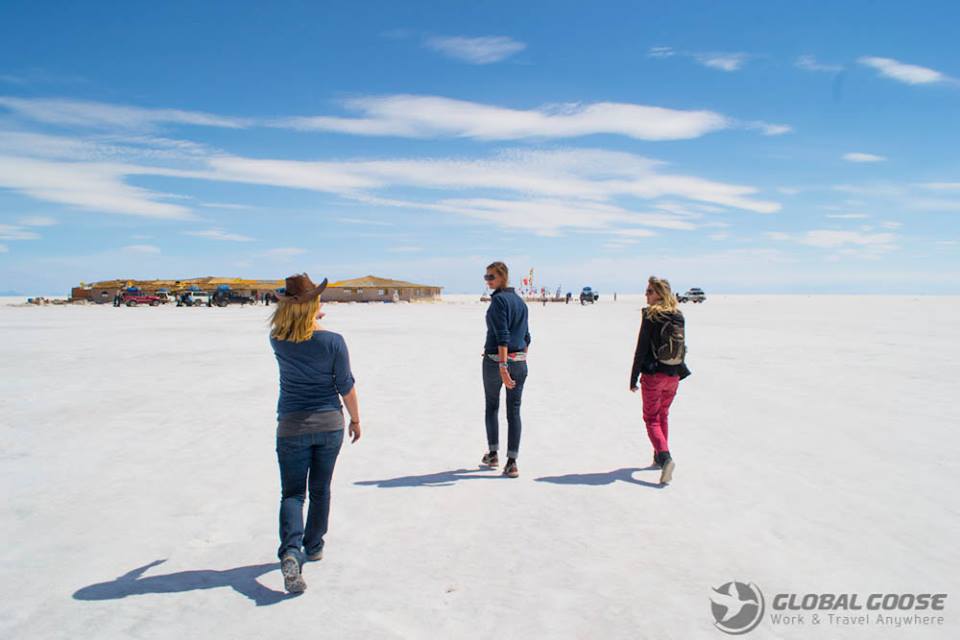 Additional snacks, water and alcohol are not included – so bring along anything that you might want. There are shops where you can buy food and water on both nights, but they will be expensive and will have limited selection. Also, bring along a little extra for a tip for your driver.

If you want a tour guide who speaks English, you will probably need to pay a bit more – we were quoted around 1200 Bolivianos for an English speaking guide. However, we decided that we would be able to understand the gist of the Spanish commentary and that the most important thing about the tour was the stunning beauty of the landscape rather than the historical information. As it turned out, our bilingual fellow travellers filled us in on any interesting details that the tour guide mentioned anyway. (Thanks guys!) 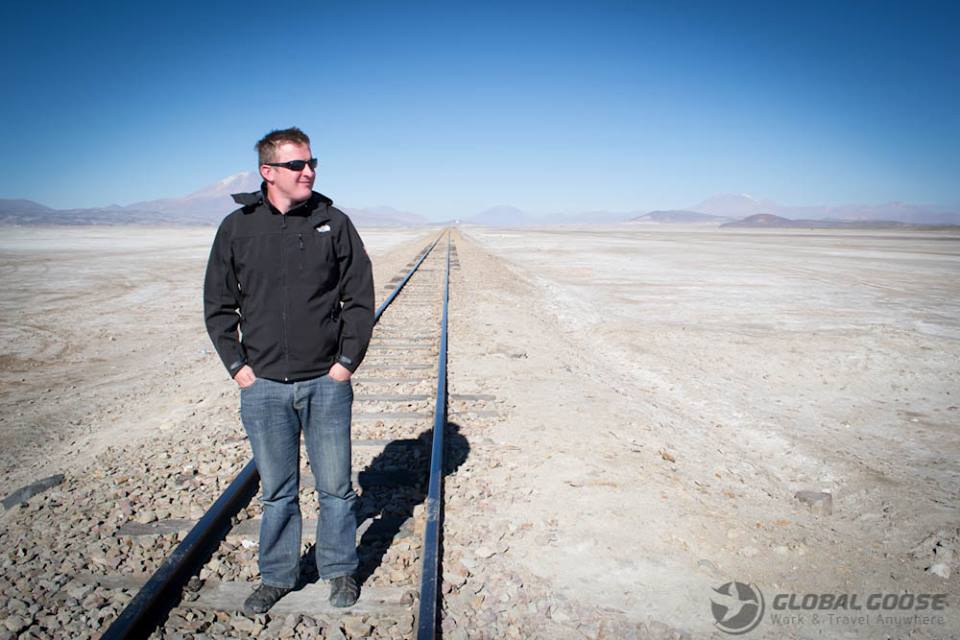 It is also possible to book your tour from Tupiza, but this is more expensive and there are fewer options. This blog has a good comparison of the pros and cons between taking a trip from Tupiza or Uyuni.

You can also choose whether you want to end your trip back where you started in Uyuni, or transfer over the border to San Pedro de Atacama in Chile. If you choose to transfer to Chile, like we did, you will take a quick one hour bus ride over the border after the tour – in the late morning of the third day.

It certainly doesn’t hurt to try to negotiate prices. Our Danish friend Marie got a cheaper deal than us and if you are cheeky and charming like her… you might just get a discount if you ask nicely!

What to Bring With You

Here are some important things that you should bring with you on the Salar de Uyuni tour:

Playing With the Horizon

Yes, taking goofy perspective photos on the Salar is an absolute must during your trip. It seems dorky, but it’s actually a lot of fun. There are so many different things that you can do, so be creative and experiment!

From our experiences, it is a lot easier to take perspective photos when you can look through the viewfinder of your camera, rather than using the display screen – it helps to line up the perspective better.

Taking these types of photos is a team effort, so go ahead and ask your fellow travellers to help you line up the shot.

Speaking of fellow travellers, one of the best things about this trip was getting to know the other four people in the 4×4 with us: Kelly and Suzanne from France, Marthe from Holland and Marie from Denmark. They are all amazing girls with lots of energy and a great sense of humour. The trip itself was great, but the lively conversation and fun jokes made the experience so much better. (Although, if you ever go on a road trip with Marie, don’t let her choose the music… unless you like listening to this song over and over and over again). 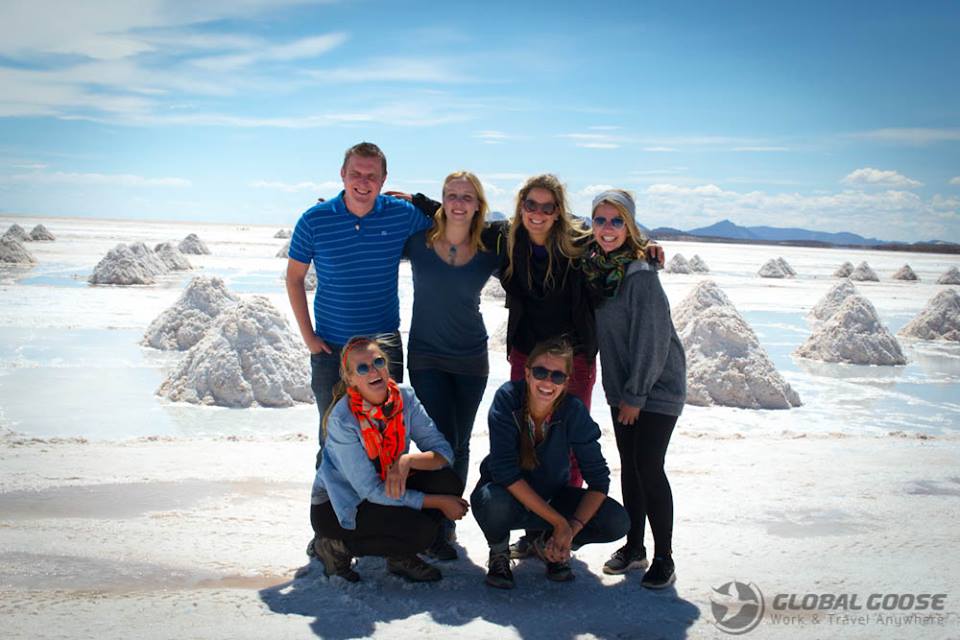 Day One: The Train Cemetery

The first stop on the tour is the train cemetery. It is filled with the rusted-out shells of trains from the 1800s, which were used by the mining companies. In the 1940s when the mining industry collapsed, the trains were abandoned – creating an odd steampunk-style playground in the middle of nowhere.

After driving across the geological equivalent of a blank white page for miles and miles, we came across “Incahuasi Island”, which is actually the top of an ancient volcano that was once submerged in the prehistoric lake.

At this point, you can pay an additional 30 Bolivianos for admission to the island and hike up to the top. Most of our group decided to hang out and take photos on the salt flat instead, so Marthe the Dutch girl and I were the only ones to make the hike to the top. The hill was covered in tall cacti and from the lookout point we could see just how far the salt flat stretched.

After more cruising through the emptiness, we reached a hotel at the edge of the salt flat, in the shadow of a ridge – our accommodation for the night. As we got closer to the hotel, we realised that the entire structure was built from salt. The walls, chairs, tables and even the beds were constructed from large, heavy white blocks – a pretty impressive feat. At dinner when I wanted some salt on my chicken, all I had to do was gather some from the corner of the room and sprinkle it on!

The heavy salt block chairs at the hotel were difficult to move, but that didn’t stop us from arranging them around one table and merging several different tour groups together for drinks and conversation. We had people from France, Canada, Poland, Estonia, Netherlands, Denmark, Peru and many other nations and there were at least two or three languages being spoken across the table at any given time. Even though we needed to be up at 6am, Lee and I stayed up late talking to a Canadian and his Estonian girlfriend for several hours before heading to our salty beds.

The Salar de Uyuni is the breeding ground for three species of pink South American flamingo – the Andean, Chilean and the rare James’s Flamingo. You have a good chance of seeing these long-legged pink birds on your trip. 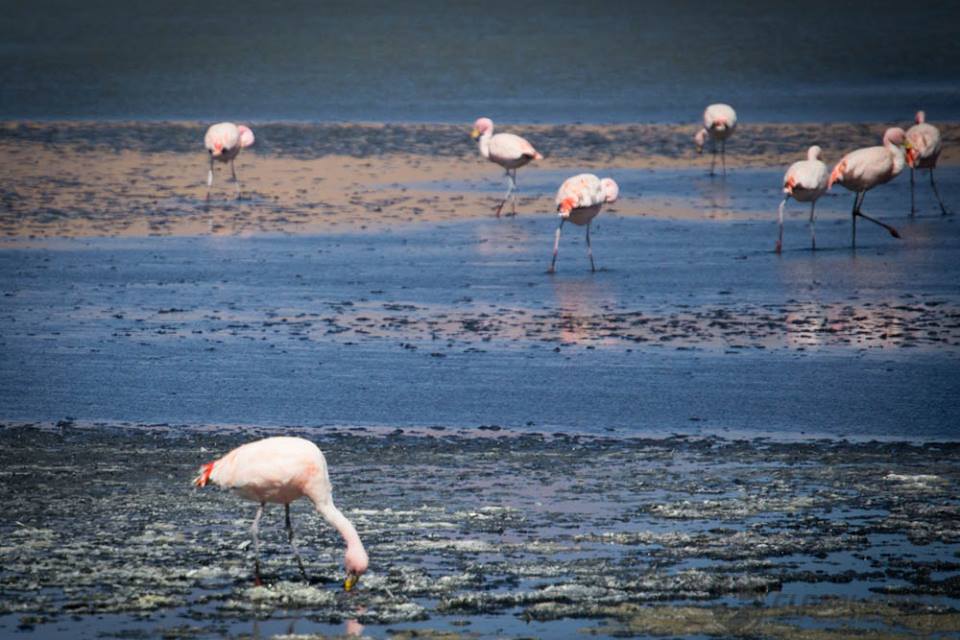 On the second day our accommodation was next to the Laguna Colorada, which is a lake that appears red because of the colour of the sediment and the pigmentation of the algae. It contains islands of borax, which are bright white (but not edible like the salt flats!). 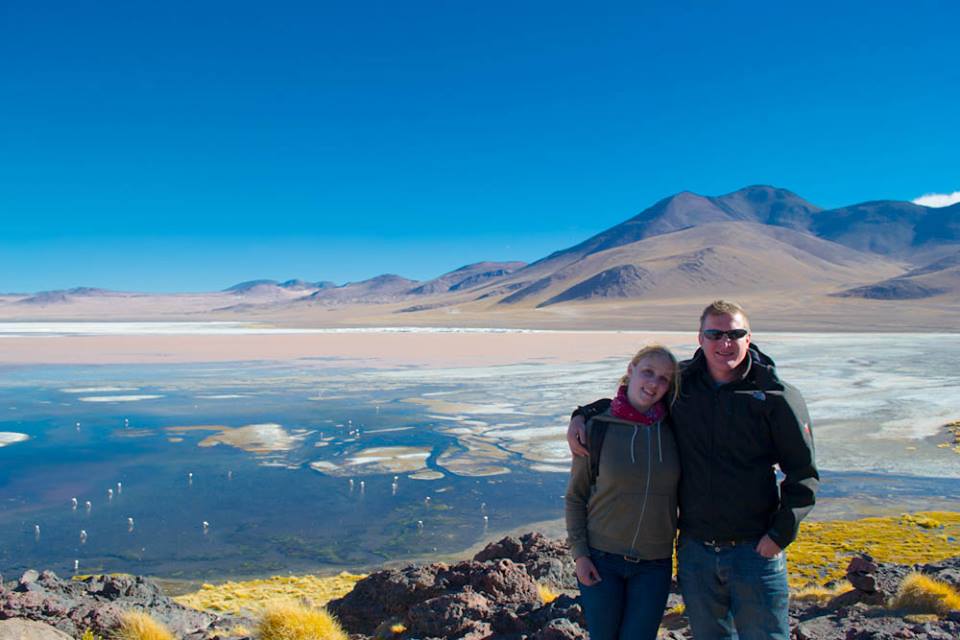 We took a hike through this strangely hued landscape. Yellow grass, red lake with white patches, purplish-mountains, ridiculously blue sky – like someone was messing around with the colour settings on a television. 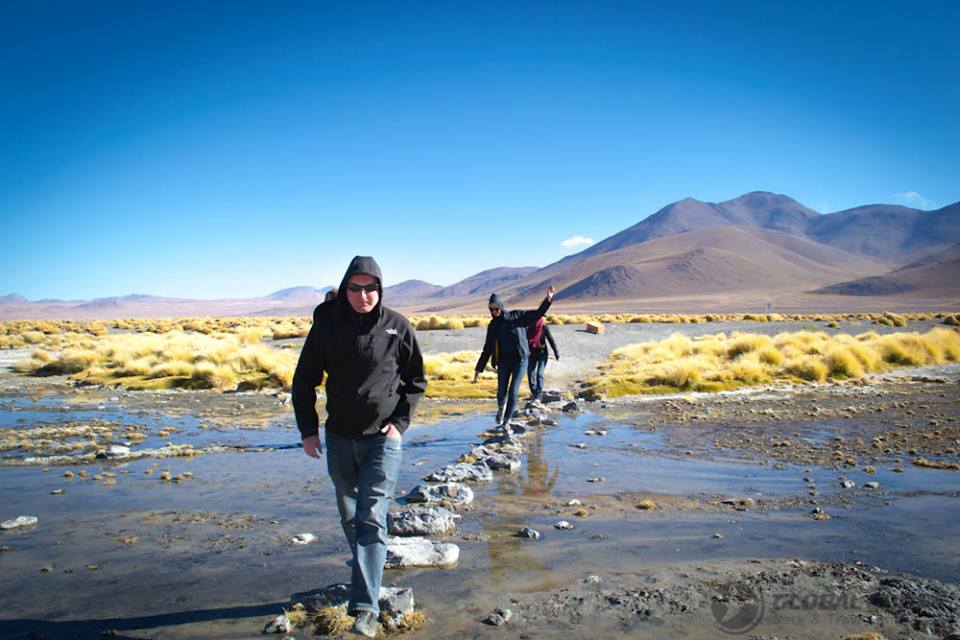 That’s not photoshop- the colours of these landscapes really are that weird.

Sunrise Over the Desert

Our hotel on the second night was made of normal building materials rather than salt blocks. We stayed up as late as we could, chatting and drinking various combinations of wine, Coca cola and whiskey… but after a while we couldn’t suppress our yawns. Waking up at sunrise and spending a full day exploring had taken it out of us and we all dropped off to sleep before 9:30 like little children or old age pensioners.

That was a good thing, because the wakeup call the next morning was at 4:30am. Marie remarked, “It’s a good thing this tour is only three days, tomorrow we would have had to wake up at 2!” The freezing cold desert wind woke us up quickly as we piled into the jeep in the dark to drive to the geysers and the hot springs.

The sun was just starting to come up as we reached the geysers and the thermal pools. Warm steam was continuously shooting out from a hole in the earth, bursting out into the air like the blowhole of a giant whale. The steam isn’t dangerously hot, so you can actually jump through the geyser – which feels amazing on a freezing cold morning.

Next to the geyser, there are geothermal pools that you should definitely not jump in – otherwise you will have your skin melted off. They look very cool though.

Although the geyser and the geothermal pools were pretty interesting, on this freezing cold dawn the six of us were all thinking the same thing – “Let’s get in those hot springs… now!” When we finally reached them, we happy immersed our shivering bodies in the steaming 35 degree water. The heat of the pools is almost too much to handle at first and stings a little on your goose-bumped skin, but once you adjust to the temperature it feels absolutely heavenly. I felt my muscles relax and my breathing slow down. I closed my eyes and felt the warm sun on my face. What a perfect way to end an amazing trip.

Have you been to the Salar de Uyuni? Would you like to take a trip across this other-worldly landscape? Let us know in the comments below.