The people who perpetuate them take advantage of the ignorance of tourists who really don’t know enough about how things work in the destination to be aware of when something is fishy. Scammers play upon this innocence, taking advantage of the trust of inexperienced travelers. When you are taken advantage of in this way, not only can you lose your money or valuables, it can make you feel anxious and can put a damper on your trip.

As I’ve said many times before, the best thing you can do to avoid travel scams is to be informed. Knowledge is the best weapon, as you will be able to spot a scam before it unfolds and protect yourself from the situation right away. When you have the knowledge and understand how the scams work, it’s so much more difficult for someone to pull a fast one on you.

I always advise travelers to do a Google search for “Most Common Scams in (Your Destination)” before they travel. It’s an easy way to find out about the types of scams that exist where you are going so that you can avoid them.

The following are 5 actual scams that Lee and I have witnessed first hand during our travels around the world. Some scams were tried on us, while others happened to friends or people we were traveling with – but they are all real. Read about how they work, so that you won’t fall for them when you encounter them on your adventures! 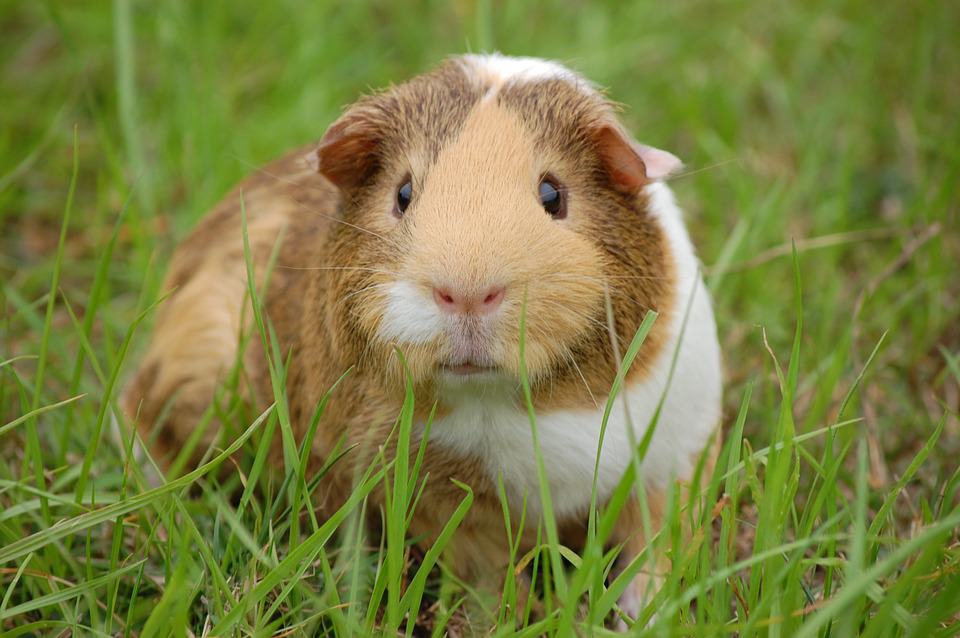 Twas the night before we saw Machu Picchu and we were in a small Peruvian town, just settling down to a meal of roasted Guinea Pig. While digging into this local delicacy made me a little bit squeamish (the tiny claws! The greasy little bones!), what really made me ill was the scam that many restaurants here play on tourists.

They will add on 10-20% to your bill at the end of the night for no reason. They will claim that it is a “local tax” that needs to be paid, but we had read in advance on Wikitravel that no such tax existed. It’s a common ploy to squeeze more money out of hungry tourists.

So, we had to argue our point when the bill came, explaining why we weren’t just going to pay a random extra charge that the restaurant owner had made up. In retrospect, we should have clarified before we ordered – ‘“no tax, no servico, no nada mas.”

This doesn’t just happen in Aguas Calientes – it happens all over the world. I caught the receptionist at our hotel in Sri Lanka tacking 10% onto the bill for no reason. I just asked him what the extra cost was for – he instantly looked ashamed and removed it from the bill.

This scam didn’t happen to us, but it did happen to an American girl we met in Buenos Aires.

One afternoon, she left to go for a walk around the city and take some photos. She came back to the hostel shaking and in tears. Her purse, her iPhone and her camera were gone.

She had been wandering along the streets of downtown Buenos Aires and she paused for a moment to photograph the architecture. An woman touched her arm to get her attention. The “kindly stranger” let her know that she had bird crap in her hair and on the back of her t-shirt. She turned to look – sure enough she was smeared with white goo.

The helpful stranger handed her a napkin and she turned around, put down her shoulderbag and began trying to wipe the “bird poop” off her hair and shoulder. While she was distracted with this, someone else grabbed her bag and ran away with it. Before she even realised what had happened – the thief had disappeared into the crowd.

You might be thinking, “What unfortunate timing – to be hit with bird poop while there are pickpockets around!” But it was no coincidence. The bird poop wasn’t even real – it was a white gooey substance squirted onto her by an accomplice of the thief. Even the kindly stranger who let her know about the stain was in on the trick. It is a well-orchestrated scam that has fooled many backpackers in Buenos Aires and in other cities around the world – so don’t let it happen to you!

So, if a stranger tells you that you have bird poop on you while you are walking around – just thank them and keep on walking. Get to someplace safe – then clean yourself up! 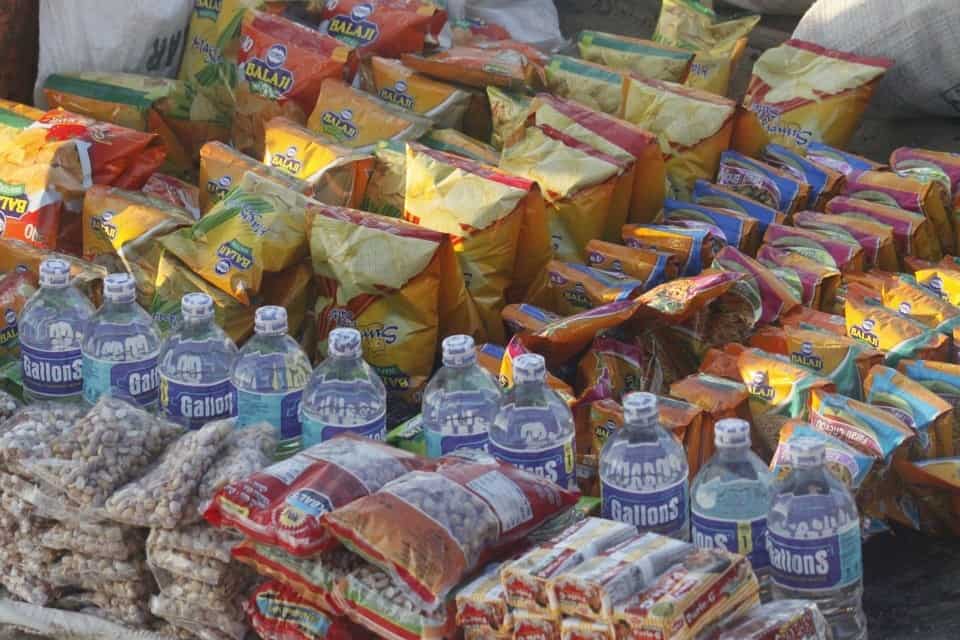 Make sure that you pay attention when you are making purchases and you add up the total of what you are paying. You’ll be surprised at how many times the total is added up incorrectly – never in your favour of course!

Once in India, before an overnight bus journey, I went to a local shop to buy some snacks and water for the road. I put the bottles of water and bags of crisps on the counter and the shopkeeper said, “150 rupees.”

I was about to hand over the money, when I thought to myself, “That seems like a lot.”

“How much are these bags of crisps?” I asked.

“And these bottles of water?”

He just smiled and waggled his head.

In that situation, the difference was minimal and even if I hadn’t noticed that the maths didn’t add up I would have only been overcharged the equivalent of a dollar. However, it’s important to know that some shopkeepers all over the world like to try this scam. They will assume that you are not familiar with the money or that you aren’t counting up what you are buying. They can also be guilty of giving you back less change than they should, so watch out for that as well.

This one didn’t happen to us, but it did happen to a German friend of ours while she was in Vietnam. She arrived at a hotel and asked about the price. The hotel receptionist told her it was $15 USD per night. She thought the price was reasonable and she decided to stay for three nights.

When it came time to check out and pay the balance, the hotel staff told her that the price per night had actually been $25. (Which is quite high for a basic hotel in Vietnam, it should be a very cheap country to travel.) She was shocked. She argued, but no one would admit that they had originally quoted her $15. There was no written proof of that price and it was her word against theirs.

When she told me the story, I said to her, “Argh, that’s so frustrating. But I would have just put the $45 on the counter and walked away. They knew what they originally quoted you and they were just trying their luck.”

“I would have done that too,” she lamented, “but I couldn’t. They had taken my passport and they refused to give it back until I paid the full $75.”

She was at the mercy of the dishonest hotel owners because they had her passport. They had asked to take it from her when she checked in, so that they could “keep it on file.” Then, they held it for ransom so that they could get more money from her.

How can you avoid this happening to you? Here are some tips:

What I usually do is to hand over my passport at first, then come back to the reception desk later and ask to take it back for a moment. I tell them that I am booking a flight online and I need my passport number. Then, I simply don’t give it back to reception. This has always worked fine.

This photo cost us 5 Euro. 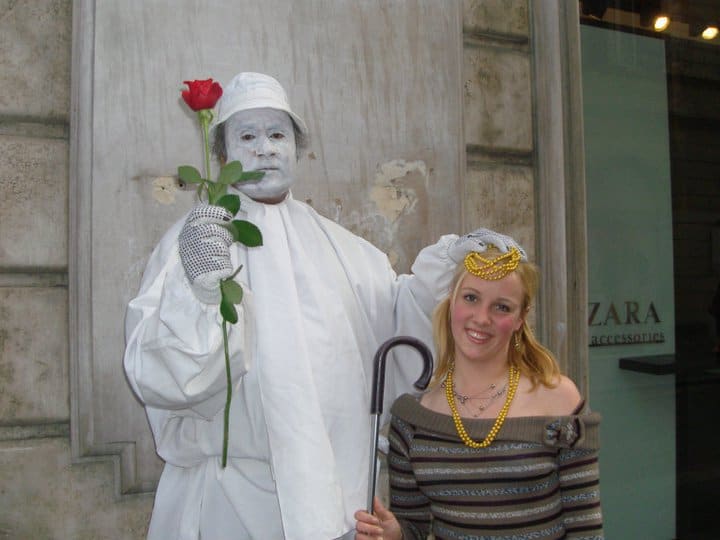 It was taken in Rome in 2010, one of our first trips together. Lee and I had just walked down the Spanish Steps and we were slowing wandering down a scenic cobblestone street. This guy held out his hand with a big smile. Naive and caught up in the magic of Rome, I smiled back and took it. He spun me around and said something about how beautiful I was.

He placed the beads around my neck, handed me the cane and encouraged Lee to take a photo. After Lee had snapped the photo, the dude in the costume gestured for us to give him money. Whoops.

We tried to give him just a coin or two, but that made him angry. He wanted more. I think he was asking for 10 or 20 Euro, but we ended up giving him 5 instead and getting out of there, quick! It was incredibly awkward. We have never posed for photos with anyone on the street since – we have learned our lesson.

This is a scam that happens not just in Rome, but all over the world. We are in Tbilisi, Georgia at the moment and there is a man with a monkey who hangs out in the tourist area. He will offer for you to take a photo with the money, but it will cost you.

The stories about other people dressed in costumes who do this around the Colosseum in Rome are even worse. According to this article, men dressed as Roman gladiators intimidate people into giving them money after they have posed for a photo and they often get 30-50 Euro for each photo.

Now whenever someone in a costume approaches me to take a photo, I decline. I don’t mind donating to street performers if they are dancing, singing, juggling, etc. and I enjoy their performance, but I don’t like being forced in this uncomfortable and scammy way.

Learn from these stories and avoid scams on your travels!

These are 5 examples of real travel scams that we have encountered on our trips around the world. Now that you are aware of them, you can watch out for them and avoid them yourself.

If you have experienced any scams on your travels, please share them in the comments below to warn others. Thank you!