Until recently I had been travelling around the world with the same wallet I have had since I was 14 years old. When I got my paycheque from my first job I felt flush with money, so I treated myself to the Adidas wallet. The funny thing was, since I had spent all of my cash on the wallet itself I had nothing to put in it. 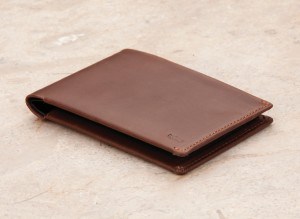 That wallet lasted for over a decade, but recently it started to disintegrate. I replaced it with the Bellroy Travel Wallet, a wallet that is specifically designed with travellers in mind.

This is a high quality wallet, it looks well-made and attractive. It’s a little more expensive, but you get what you pay for and this wallet will last a lot longer than cheaper versions. It also comes with a little passport sized notebook, which can be handy for jotting down travel details or making notes about your observations on the road.

The wallet itself is quite big, so you will need large pockets to carry it. However, it is quite thin so it will not bulge out like other smaller wallets. This makes it quite a bit less obvious to pickpockets. Also, it has two large separate compartments for notes, which is very convenient if you have two different currencies in your wallet at once. Also, the compartments are long and wide enough to carry boarding passes.

The wallet includes several small compartments, including handy little pockets for SD cards. The pen inside is always handy to have when it comes to filling out border entry cards and other travel documents on the go – and it’s so tiny it never fails to get a laugh.

There is a special compartment designed specifically for carrying your passport. This is really convenient, especially when you are at the airport and you want to keep your passport at hand but you don’t want to damage it.

Although the wallet feels a little empty and floppy without it, you don’t have to carry your passport at all times. In fact it might not be a good idea while you are travelling because you will have all of your eggs in one basket. It’s better to keep some of your cash, cards and a photocopy of your passport in a separate location just in case your wallet is stolen. 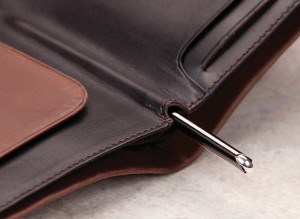 One of the disadvantages to this wallet is that there is no place to put coins, so you will have to keep all of your change somewhere else. Also, one of the card compartment is slightly bigger than the other, which means that normal sized cards can fall out of it easily so you need to be careful. Also, the leather tends to crease so the wallet won’t look crisp and new for long. However, all in all I’ve been very pleased with this wallet.

If you are a frequent traveller and are looking for a wallet to take with you around the world, this one is a great choice due to its travel-friendly design. Just don’t copy the guy in the video on the Bellroy website who places it in his back pocket – or you’ll be an easy target for pickpockets!

The Bellroy Travel Wallet was supplied to me for free for review purposes. All opinions are my own.