The second largest city in Myanmar, Mandalay was the last location of the royal capital before the country was under British rule.

Throughout the colonial period it was the centre of Burmese culture and Buddhist learning. When Burma gained independence from Britain in 1948 the city remained the main cultural and economic centrepoint of the country.

Some tourists skip right through Mandalay, heading straight to popular tourist destinations such as the pagodas of Bagan or the natural beauty of Inle Lake. However, take at least a day to explore what Mandalay has to offer – it’s history and architecture is worth exploring. 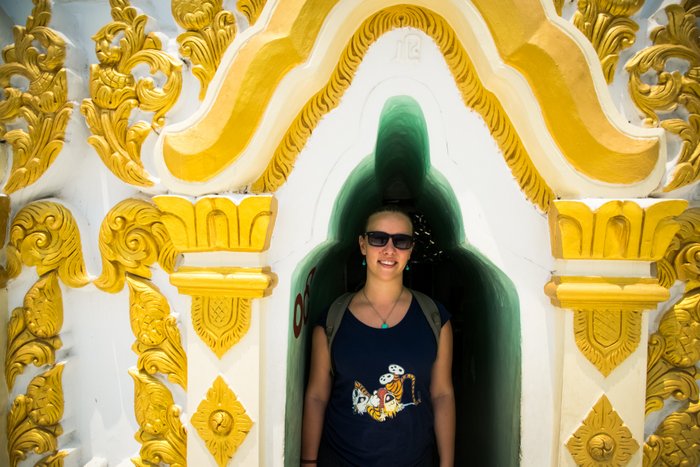 In order to see the highlights of the city in one day, we hired a private taxi with a friendly English speaking driver to drive us around. Arranged through our hotel, we agreed on a price of 60,000 kyats for the full day ($51 USD). This also means that you can visit some of the sights that are just outside the city. There are set tours that you can arrange, but I just wrote down the places we wanted to see on a piece of paper and arranged a tour based on that. It worked pretty well, except for some confusion that would come up later.

As I stepped out of our air-conditioned hotel in Mandalay that morning my eyes immediately squinted at the bright sun and sweat started to bead on my forehead. 42 degrees Celsius is intense and it means when exploring this city you need to stay properly hydrated, seek out shade and take it slow. There’s a reason why they say only mad dogs and Englishmen go out in the midday sun.

Our first stop was the Mandalay Palace. For an entrance fee of 10,000 kyat ($8.50 usd) you can walk around the temples, go up the watch tower and see the small museum. Also, be sure to find this old plane that is just sitting there rusting away in the jungle.

The structures are beautiful and impressive, but my favourite part was this book of Burmese folk tales that I bought in the tiny shop of the museum.

Every time we got back in the car between places throughout the day, I would read a few more folk tales and get a glimpse into Burmese mythology. What did I learn? Mostly that the Rabbit is a smart ass who loves to trick all of the other animals and always has the last laugh.

The most difficult thing about visiting pagodas in Myanmar in the intense heat is that tradition dictates that you take your shoes off within these sacred spaces.

I’m all for being respectful to the local culture, of course. However, the sunshine bakes the floor tiles so hot that your bare soles nearly sizzle upon contact. Hopping across those lava-like floors was like some kind of self-inflicted torture and I had to meditate on “mind over matter” to make it to some of the pagodas. I still have burn blisters on the balls of my feet. 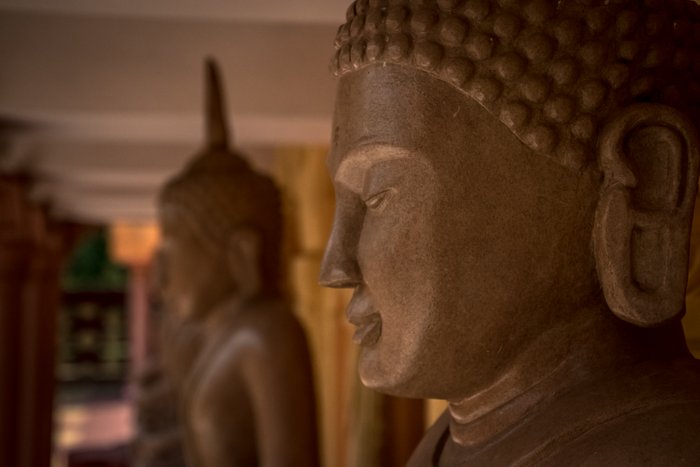 More Beautiful Buildings In and Around Mandalay

That morning we stopped at quite a few more impressive buildings. If you have been in Southeast Asia for any length of time, you have probably seen quite a few temples and pagodas. Sometimes I get temple-burn-out and they all start to look the same. However, although they are all similar in their style and structure, each place has something unique to it if you look a little closer.

What stood out to me about this structure was the perfect symmetry, it was exactly the same on all sides. Those gorgeous ornate carvings were fascinating and I could have admired them for a long time.

After climbing a lot of stairs we reached this pagoda within a cave on top of a hill. You know the effect that you can create by facing two mirrors towards each other and standing in the middle, making an infinite row of copies of yourself? Well, this pagoda has a long row of Buddha sculptures next to each other that reminded me of this effect. 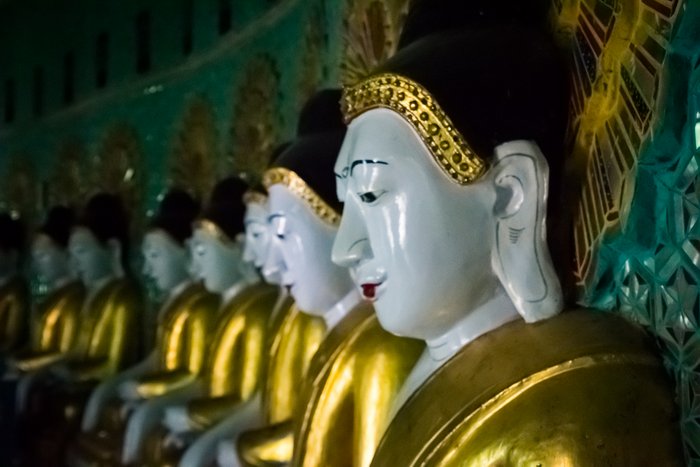 Also, this was one of the worst pagodas for feet-burning danger. I think it was this red floor that caused my skin the most damage – when I look at this photo I can still feel the pain. Be warned. 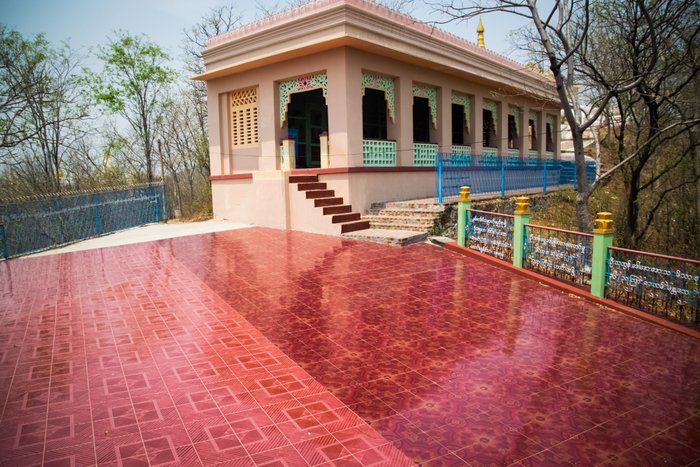 This pagoda was one of my favourites because it had puppies (unfortunately we didn’t get a good photo of them.) When you visit, pay attention to the dates inscribed noting when the structures were built. I thought it was interesting that it appeared in the same style as the other pagodas built long ago, but it was actually constructed in 2015. 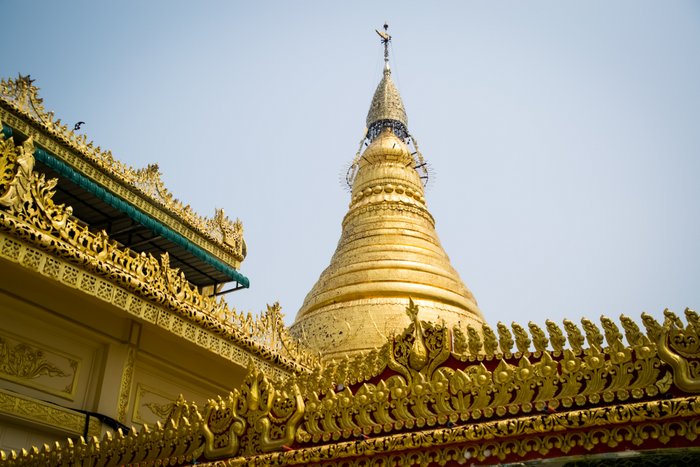 At this point we stopped for a simple lunch. It came to 10,500 kyat ($8.90 USD)  for two plates of fried noodles with vegetables and chicken, a watermelon juice, two cokes and a bottle of water.

When we arrived in Inwa, that’s where the confusion began. We thought the tour was taking us to Inwe but instead he took us to a point where we could get a boat across a river, then take a horse cart ride around Inwe for an extra 12,000. This wasn’t mentioned when I originally booked the tour and we weren’t happy. We had arranged to be taken to all of these places including Inwe, not taken to somewhere nearby then forced to pay more.

The driver could have taken us, but he didn’t want to. There were some excuses about taxis not being allowed in Inwa, but those were false as we saw later.The driver ended up calling the hotel and we talked to them to resolve the matter. We eventually reached a conclusion that we would pay 50,000 to the driver instead of our originally agreed price of 60,000 because he hadn’t taken us all the way to Inwa. It wasn’t ideal, but we went with that.

If you are arranging a taxi tour, make sure that you clarify this point about Inwa in advance so that you don’t run into the same issue we did.

In the end we paid 1,200 for the boat across the river and decided not to take a horse cart ride on the other side. Instead we walked around, me using an umbrella and Lee using my sarong as a bandanna to beat the heat. 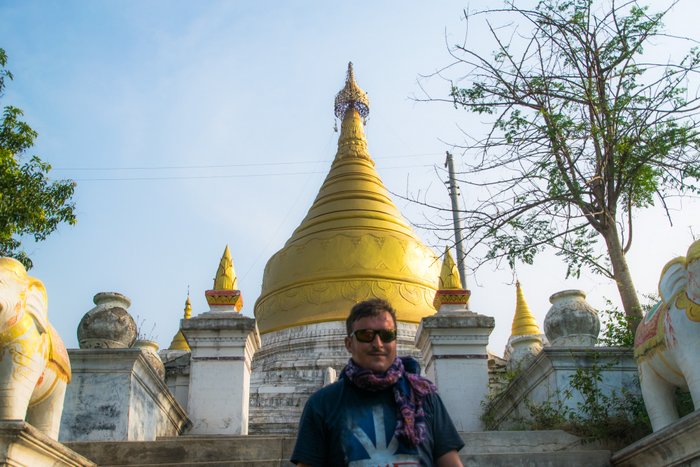 Although we were offered many horse cart rides, we refused them. We didn’t like the fact that we felt pressured to take the horse cart and we wanted to be able to explore Inwa on our own.

Inwa is the ancient imperial capital and the site of Burmese kingdoms from the 14th to 19th centuries. As we wandered down the long dusty roads between the pagodas, we found ourselves walking with a young girl and her herd of goats. Kids with kids. 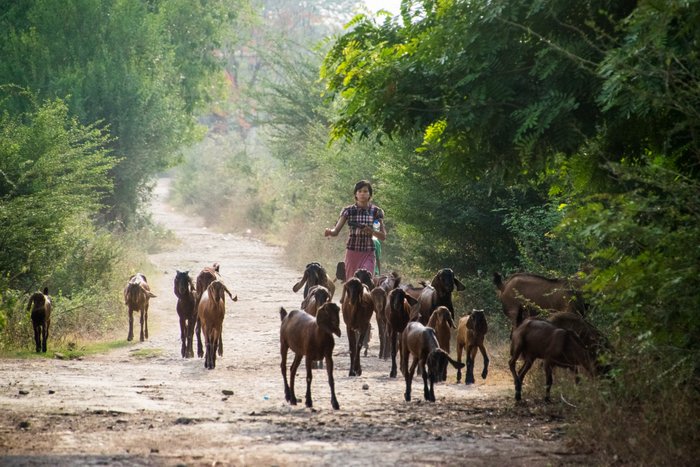 After Inwa we headed to Amarapura to see U Bein Bridge, thought to be the longest and oldest teakwood bridge in the world. We took a walk down the long wooden bridge, a little bit nervous about the creaky beams. How do they know when one of the beams needs replacing, or do they just wait until it breaks and an unsuspecting tourist falls through?

This spot is a popular place to watch the sunset and many photographers with massive lenses were already poised in position before we got there. At first the sky was overcast, but just before the sun sunk below the horizon it came out from behind the clouds so Lee could get a few photos. 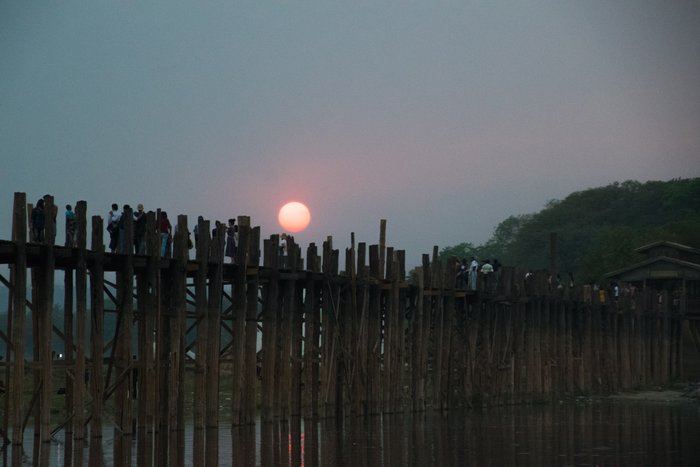 Have you been to Mandalay? Would you like to do a one day tour like this one? Let us know in the comments below.

Exploring the Temples of Bagan, Myanmar by Bicycle