Visiting a famous travel destination like Machu Picchu, one that you have heard about in blogs, books and stories, is a little like meeting a celebrity in real life. You’ve seen so many pictures and films and you’ve perhaps imagined the meeting in your head – but when you finally come face to face you are still knocked speechless.

That’s how I felt when I climbed up the stone steps and set eyes on the ruins of Machu Picchu for the first time. If I wasn’t already out of breath due to the high altitude, I would have said that it took my breath away. 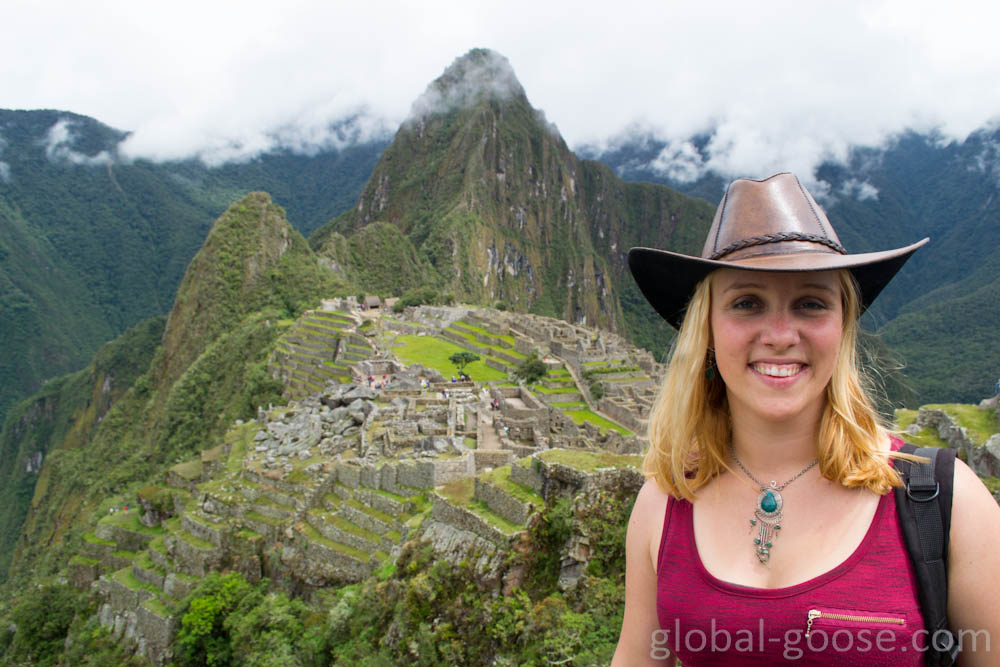 While planning our trip to Machu Picchu, we discovered that there are as many ways to approach this famous site as there are backpackers wandering around Peru wearing ridiculous woollen hats with llamas on – quite a few. You can hike the full trail, the partial trail, take the train, take the bus or even go up the back way. Also, travel information was changed slightly when we went, because there had been a massive landslide on the mountain blocking the road for the buses.

After getting confusing and conflicting information from a few different people, our final plan was to take the train from Ollantaytambo to Aguas Calientes, the town located right at the base of the mountain where Machu Picchu is perched. We would stay there for the night and then take the bus up to Machu Picchu first thing in the morning.

We thought we could take a bus back to Ollantaytambo in the evening, but the guy at the hostel who told us this was wrong. When we tried to buy our bus tickets back we were told that this bus didn’t exist and we had to pay for another train journey. It’s too bad we didn’t know in advance that we would have been returning on the train or we could have saved money by buying return tickets. 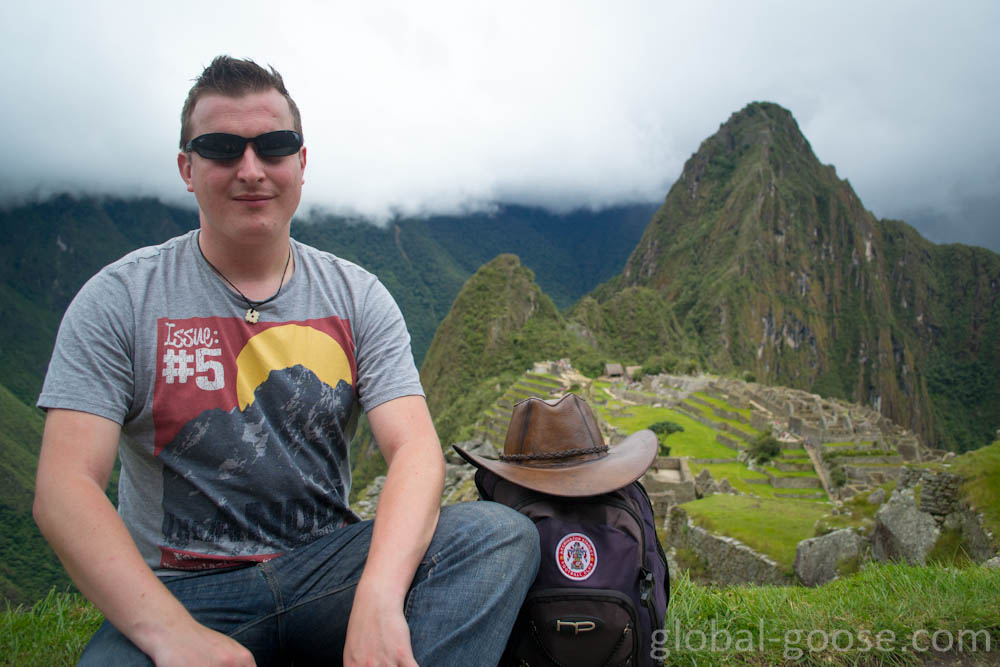 We had heard that Aguas Calientes had no redeeming qualities and was nothing more than a tourist trap. However, we didn’t mind it at all. It has a gorgeous rushing waterfall going through it, a great marketplace and cute winding streets. On the day before our Machu Picchu adventure, we wandered around the town getting our Tourist Ticket for the site, bus tickets and other last minute necessities.

However, one thing to look out for is the “tax” whenever you eat out in a restaurant. It’s a common scam that the restaurants play on tourists – they will add 10-20% to your bill at the end of the night, claiming that it’s a local tax that must be paid. We had been warned by Wikitravel in advance so we knew that there was no such thing. We got charged the extra, but we defended our point and only paid the fair amount on the menu. To avoid any surprise charges, we recommend specifying “no tax, no servicio, no nada mas” as you are being seated.

Speaking of dining out in Aguas Calientes, I decided to try a Perivuan delicacy that leaves many people feeling squeamish – Guinea Pig. 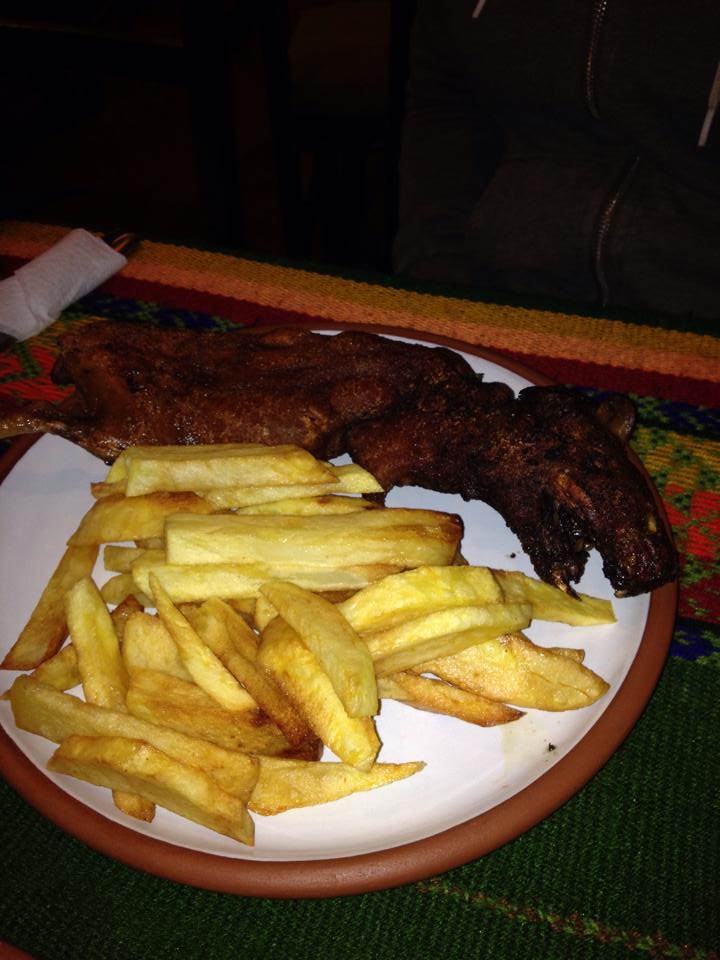 I know, I know, you’re probably rocking in your chair crying after seeing that photo and having flashbacks to your dear Fluffy or Peanut. You probably don’t want me to tell you that Guinea Pig, or “Cuy” as it is called here, is actually pretty tasty. There are a lot of tiny bones to pick apart and I couldn’t bring myself to eat the adorable little paws – but other than that it tasted just like chicken.

With a belly full of Cuy, I went to bed that night as excited as a kid on Christmas Eve – as tomorrow I would feast my eyes on Machu Picchu.

I don’t mind getting up in the morning, especially if I have something exciting to do that day such as see a world famous landmark that I have had on my bucket list for many years. However, Lee is never a morning person. I felt sorry for him having to deal with my inane excited babbling at breakfast. 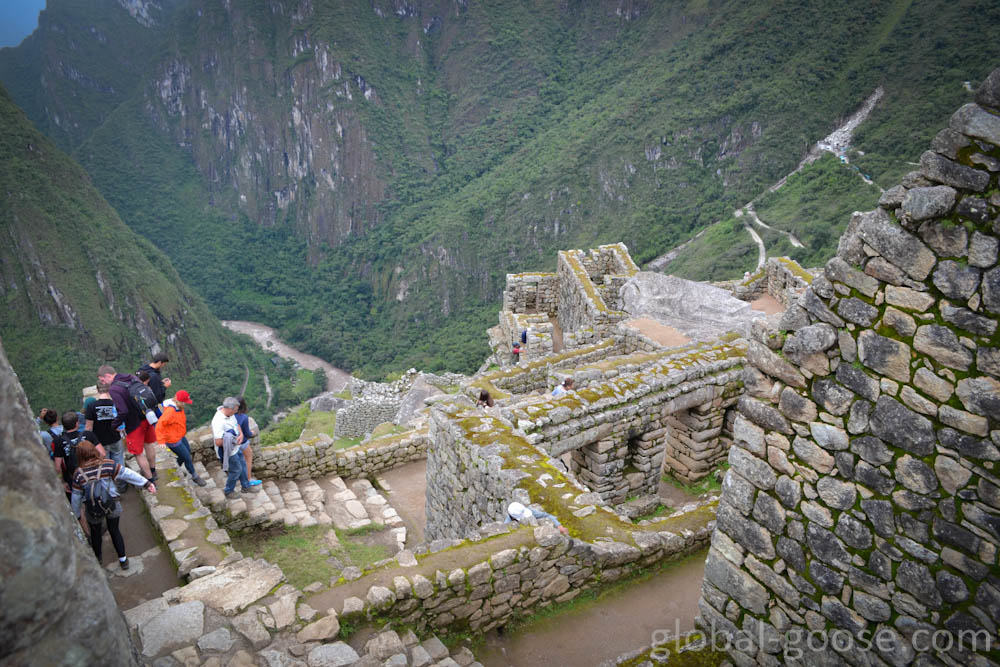 By the time we made it to the bus at around 9am, the queue was already at least 100 people long. However, it moved quickly as bus-load after bus-load was carted away up the mountain, so we were on our way within 20 minutes. Make sure that you buy your bus ticket in advance the day before!

The bus ride up the mountain is a little bit nerve wracking – when you look out the window you sometimes can’t see the edge of the road and you feel like you might just go tumbling down the steep switchbacks!

When you reach the top of the mountain, there is a café, toilets and even a hotel. There is a luggage storage area up there too, for only 5 soles, which is a great idea so that you don’t have to carry heavy bags around while exploring the ruins. Next, climb up the steps, get your tourist ticket stamped and walk up the path to beautiful Machu Picchu!

Machu Picchu – A World Wonder Before Our Eyes

It doesn’t look real, does it? 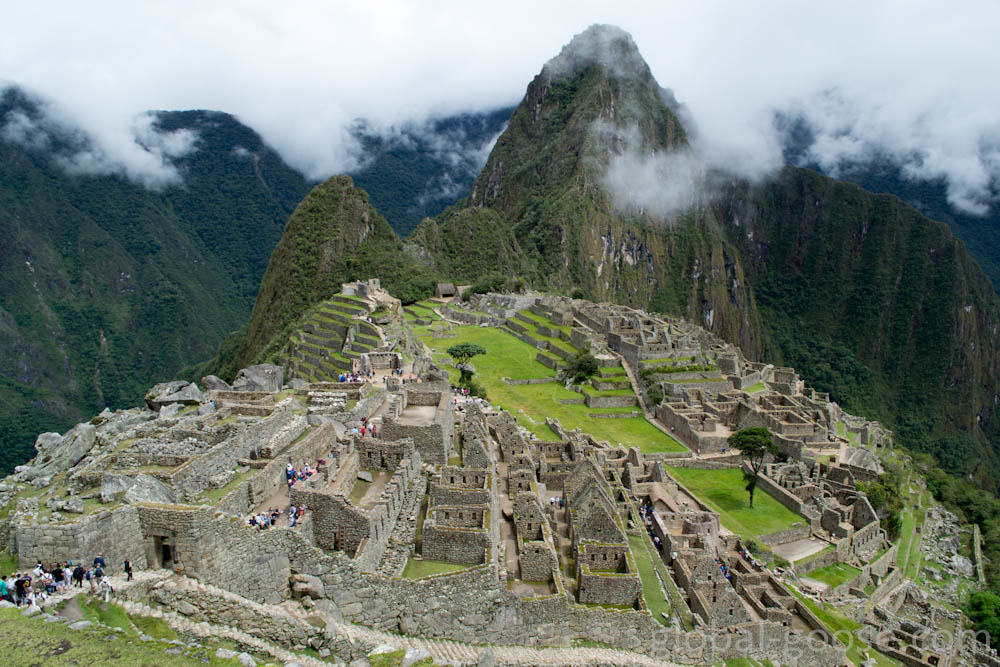 There’s no doubt that Machu Picchu is one of the most photogenic places that we have ever been. Just check it out!

Because it’s so falling apart, it’s easy to assume that Machu Picchu is really ancient – like the beautiful temples of Angkor Wat. However it was built between 1438 and 1472. Compared to anything in Canada where I am from, that is pretty old – but compared with many things in the UK where Lee is from – it’s relatively recent. To put it in perspective, Lee used to work in a hotel in England that is over 200 years older than Machu Picchu. It’s interesting to think of this complex, which was built as an elite retreat for the upper echelons of Incan society, being constructed around the same time frame as all of the Medieval castles in Europe.

It was abandoned in the mid-1500s around the time of the Spanish Inquest and although it was known about locally, it was a secret to the outside world until 1911 when it was brought to international attention by Hiram Bingham, American historian. 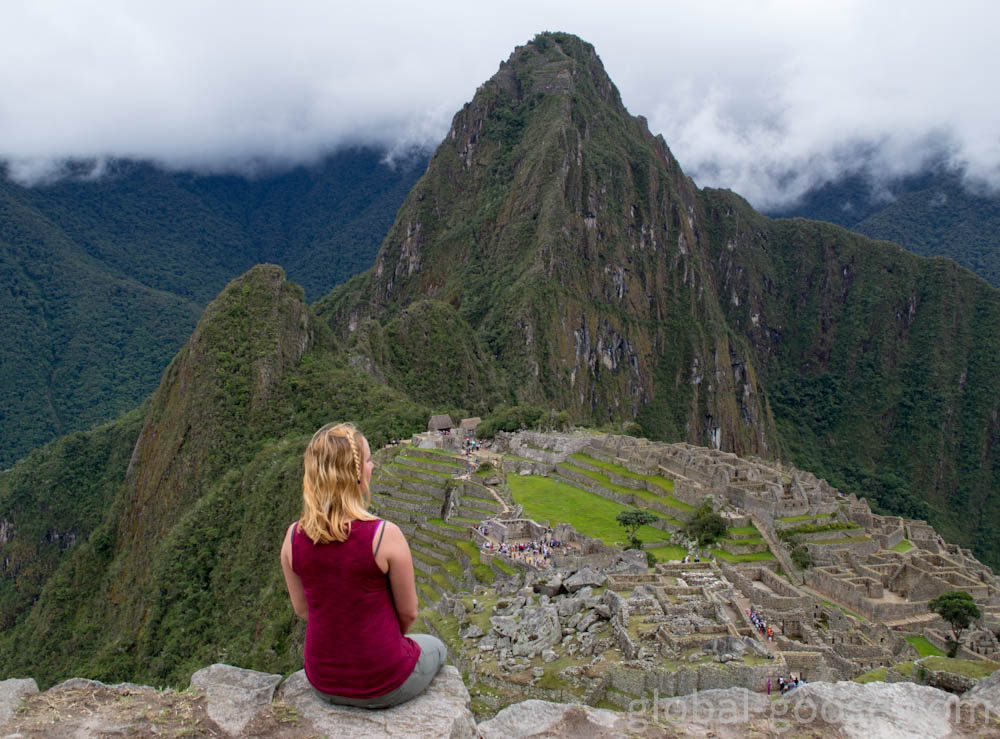 However, the most impressive thing about Machu Picchu is not its age but its location. It’s perfectly perched high on a mountaintop which is hidden from view down below – cradled in this little nest in the clouds. You could put a KFC up in that spot and it would look majestic.

While wandering around the ruins, you will encounter a number of llamas just going about their business, eating grass and looking hilarious – as llamas do. You can try to pose next to one for a photo, but watch out because they are very lonely and they might try to make the moves on you, like the one amorous llama that tried to give Lee a kiss.

Then the Rains Came…

After about three hours of climbing up and down and exploring all of the little nooks and crannies of beautiful Machu Picchu, we felt a few drops of rain on our faces. We decided to head down the mountain and it’s a good thing we did, because the heavens then opened up and showered Aguas Calientes with a torrential downpour. If we had waited too much longer, we would have been standing in a bus queue in the pouring rain at the top of the mountain – but instead we were drinking Inca Cola and looking at our photos in a cosy café as the streets of the town quickly turned into rivers.

After the rains subsided we took the train back to Ollantaytambo later that evening, hopping over the massive puddles in the street on our way to the train station. We just so happened to sit next to a group of 20-somethings who had just finished hiking the entire four day journey to Machu Picchu and were celebrating with a few drinks. As soon as we sat down, we were engaged in conversation with a couple of wonderfully gregarious Irishmen and an hour later we were pouring rum into our complementary cups of Inca Cola and singing “Wonderwall” by Oasis with these happy strangers. It was a great way to end a truly amazing travel day. 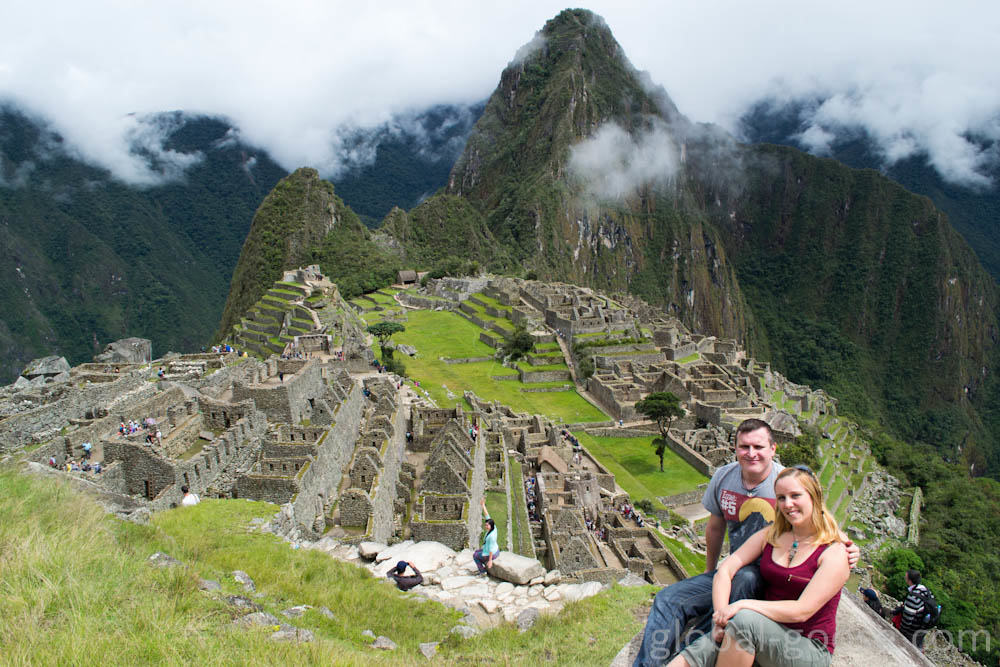 Have you been to Machu Picchu? How did you get there? What did you think? Let us know in the comments below.