The origins of the name Ljubljana are contested – but the prevailing theory is that it comes from the Slovenian word ‘ljubljena,’ which means “the beloved.”

It wouldn’t surprise me at all, as there are many things to love about this beautiful city.

A picturesque historic settlement along a flowing river, Ljubljana has centuries of stories yet a modern and youthful energy. An ancient castle sits on a hilltop overlooking the city, carved dragons loom over bridges and the locals sit in riverside cafes for hours chatting and sipping espresso. One of the best things to do in Ljubljana is to wander around without an intinerary and enjoy the vibe.

This city has a truly romantic vibe – marked by the fact that the huge statue in the central town square is of a poet (France Prešeren) rather than a political figure or military hero. With many art galleries and public sculptures throughout the city, it’s easy to see that music, art and beauty are celebrated here.

We spent quite a bit of time in Ljubljana on our travels in the Balkans and we absolutely loved it. In this guide, I’ll share a bit of what I learned during my visit and some recommendations to help you make the most of your time here.

My advice would be to plan your visit for the shoulder seasons of spring and autumn, perhaps either in May or September/October. Lee and I were there in mid-September and it was an absolutely perfect time to visit. The weather was still sunny and pleasant and the leaves were transforming into spectacular hues of red, orange and yellow.

Note: Although the Slovenian capital is easy to travel, it can be difficult to pronounce. The J’s are silent, so it’s said “Lyoo-Bly-Ah-Na.” 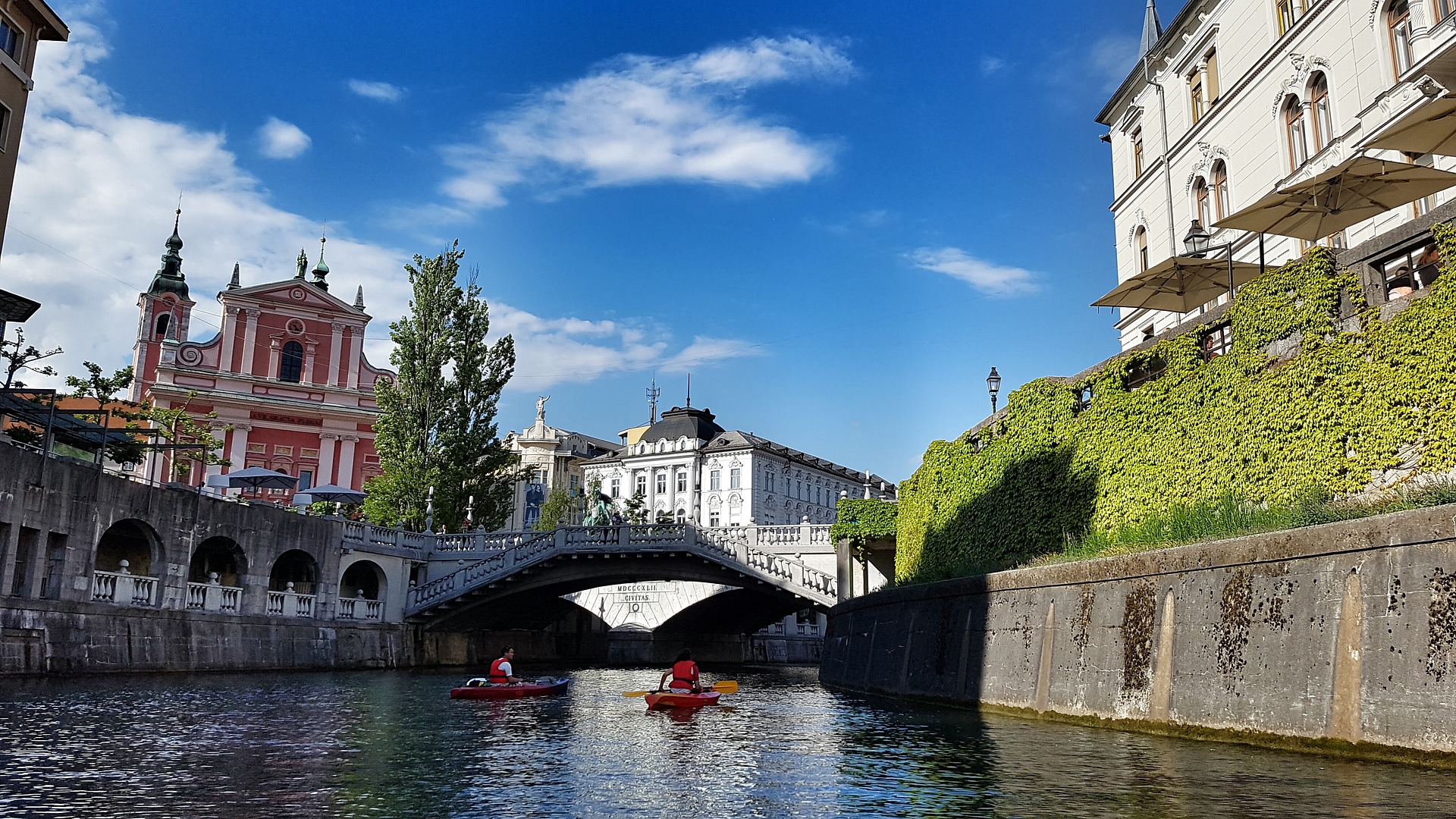 A Bit of History

Ljubljana has been the cultural, political, economic and administrative capital of Slovenia since 1991. However, the city has been here for much longer than that. The area was first inhabited by people living in simple pile dwellings in 2000 BC. It was first mentioned in the 12th century, as the historical capital of Carnolia (part of the Habsburg Monarchy).

There are many theories on the origin of the dragon as the symbol of Ljubljana. According to the Slavic myth, the slaying of a dragon releases the waters and ensures fertility on earth. This myth is tied to the creation of the Ljubljana Marshes – the large marshy area around the city. It is also thought that the dragon may have been adopted from Saint George, the patron of Ljubljana Castle (constructed in the 15th century). 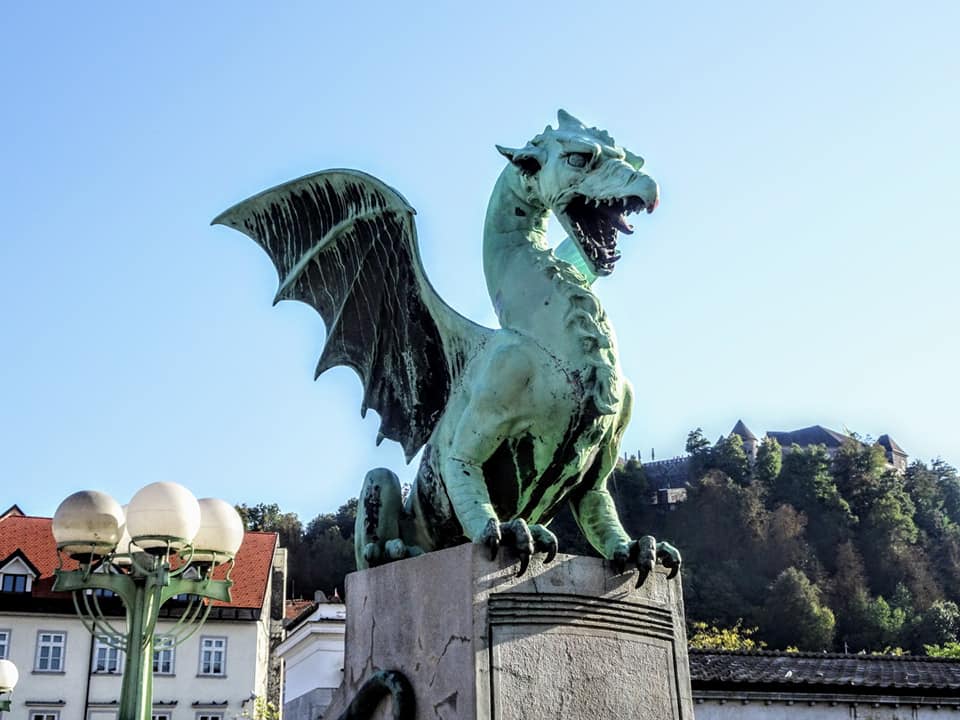 Things To Do in Ljubljana

This is the largest park in Ljubljana, located very close to the city center. There are plenty of fun things to do here, such as mini golf, walking trails and even a bowling alley and tennis courts. You might even see art exhibitions and performances here.

You can stop for a coffee at one of the cafes and bars in the park, or sit down on the grass and enjoy a picnic.

On every day of the week except Sundays, the open air Central Market will be in full swing. There are dozens of sellers gathered in the square and you can find fruit and vegetables, meat and dairy products, flowers and plants, herbs and so much more.

The market is also a great place for artisans to sell their unique creations. You can find jewellery, clothing and other handicrafts for sale here as well. Why not bring home a unique souvenir, crafted by a local artist?

Hike up to the top of Castle Hill (or take the tram) to explore this fascinating landmark built 900 years ago and admire views of the surrounding city. The original castle was made from stone and wood and more practical military buildings were added onto it later. It became an arsenal in the 16th century, intended to ward off an Ottoman invasion.

The main courtyard of the castle is free to enter and features a restaurant, nightclub, cafe and galleries. For a fee, you can ascend the watchtower and admire the stunning views of Ljubljana.

What a strange and fascinating place! Metelkova Mesto is one of the largest urban squats in Europe. It’s a self-proclaimed city located within a street-art-covered abandoned army base just across the river from the Old Town. It’s adorned with elaborate sculptures made from old oil drums and broken bike frames.

In the evenings, artists and students gather within these illegally operated buildings, to enjoy everything from theatre performances to punk rock concerts to LGBT club nights and much more. It exists outside the law, raising its own funds via concerts and events.

It’s a fascinating cultural spot and definitely worth checking out. (Don’t worry, although it is graffiti-strewn and looks slightly derelict, it’s pretty safe and welcoming.)

While you are in Ljubljana, you should definitely take a day trip to the stunning Lake Bled. This pristine mirror-like lake in the Julian Alps looks too pretty to be real. Surrounded by mountain peaks (with a tiny island sitting like a jewel in the middle) this lake is overlooked by the Medieval Bled Castle perched high on a cliffside.

You can take a wooden boat to the island to visit the church and ring the famous Wishing Bell or hike up to the top of the hill to admire the view. While you are there, be sure to try the cream cake that is local to the region. It’s so light and fluffy and delicious! (More on this below.)

I still daydream about this warm, flaky, deliciously comforting pastry. Burek is originally of Turkish origin, but it is a popular snack all throughout the Balkans. It can be made with a range of different fillings, from minced meat to cheese and more. (These days, burek is even being made with pizza toppings inside.) It’s so good that it made the list of the World’s Best Street Food as compiled by The Guardian.

This popular pastry is served up warm and fresh from street stalls, takeaways or small bakeries throughout the city. One of the most popular is known as Nobel Burek. Burek is often eaten with plain yogurt, which is the perfect complement to the buttery richness of the pastry.

Our trip through the Balkans was where I really developed a deep and enduring love for seafood pasta, and Slovenia was no exception. The seafood pasta you can enjoy in Ljubljana is excellent, with buttery noodles, juicy tomatoes and perfectly cooked mussels and clams.

I have nowhere specific to recommend, but this is definitely something to eat when you are in this part of the world.

If you’re going to Ljubljana – I’m jealous of you. Why? Well, not only are you going to be visiting a great city, but you’ll also have the chance to go the best gelato place I’ve ever discovered on all my travels. It’s called Cacao, and it can only be found in Ljubljana, Prague and Portoroz (on the Slovenian coast).

If you love dark chocolate as much as I do, you’ll adore the dark chocolate and raspberry gelato they serve. It’s so good that I went back many times for it and I still think about it a year later!

Your travels in Slovenia are just not complete until you have tried this delicious dessert. The cake originates in the town of Bled, but it is sold pretty much everywhere. It has a thin, crispy base made with puff pastry, then a thick layer of custard cream and another layer of whipped cream. It’s topped with more flaky pastry, plus a dusting of icing sugar.

The result is a light, fluffy, sweet and cloud-like cake. It can be a bit messy to eat and you’ll be covered in icing sugar when you’re done, but it’s so worth it. 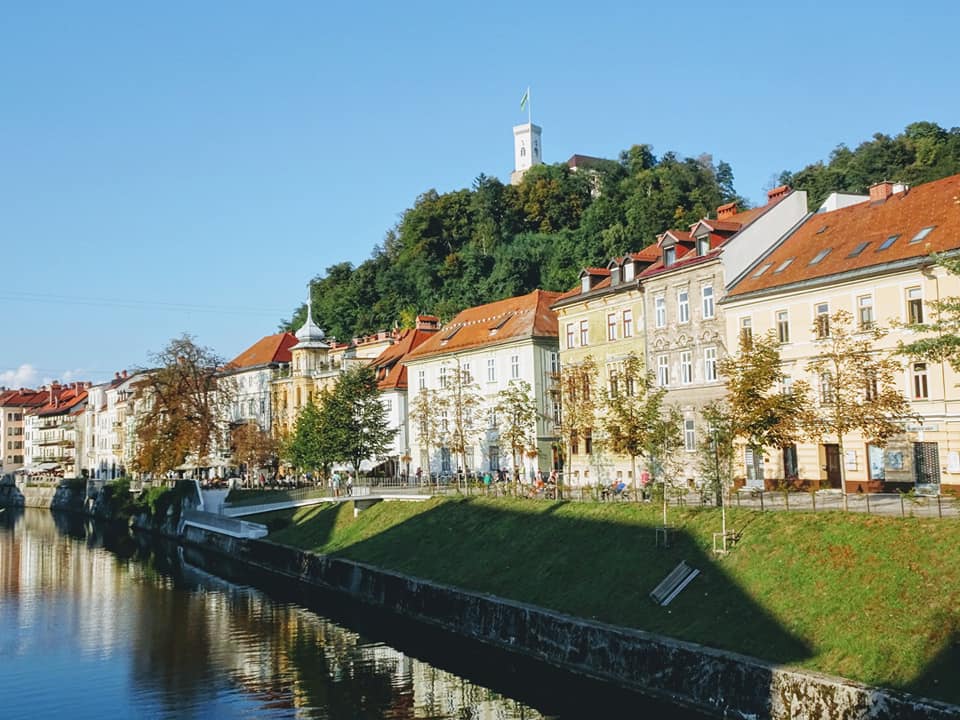 Any questions about Ljubljana?

If you’re planning a trip to Ljubljana and have any questions, leave them in the comments below! Or, if you’ve been here and have a recommendation for things to do in Ljubljana, please share it!