When I said I was going to go to Lefkada in the summer, one thing everyone said to me was: “Go and see as many beaches as you can”. So, there we were. Two tourists eager to find a Lefkada day trip so we could explore the sandy beaches with an endless emerald sea everyone talked about so passionately about.

To our great (and sad) surprise, when we arrived there we heard from the locals that most beaches can’t be reached by foot and that they are spread throughout the whole island, which made it very time-consuming to tour with a car. Our vacation plans started sinking in the blue water.

Then the stars aligned. A guy approached us with the question “Are you interested in a boat cruise?” YES! YES, WE ARE! I could tell our excitement made him giggle a bit.

It turns out that he was hired (as many others) by the boat owner to promote the cruise, and our fears that we wouldn’t experience the island as we wanted were for naught.

So, without further ado, I will try to break down the Lefkada day trip cruise for you in as much detail as possible.

A Guide to Our Lefkada Day Trip

The guy explained the whole cruise schedule in detail (I will too in a bit) and offered us tickets on the spot. The initial price for it was 25 EUR but since we reserved it on the beach up front, he gave us a discount and made it 20 EUR.

You can also purchase a ticket at different locations in the city, as well as on the port before the ship leaves, but that means running the risk of not finding a ticket. And of course, buying the tickets at the port means losing the discount.

Getting to the Port and Pre-Boarding Impressions

The departure port for this Lefkada day trip is located in the center of Nydri – Nydri main port to be exact. All the cruise boats are lined up one next to the other, so don’t worry, you can’t miss it. There are also private parking spots where you can leave your car for the whole day for just 3 EUR.

We found out when we arrived at the departure port that there are multiple boats going on the same cruise path every day. The ticket we bought was for Nydri Star II, but my advice would be to take the Makedonia Palace boat. Reason? The roof tarps.

I’m not even joking. Nydri Star II has very little sun protection on the top floor compared to Makedonia Palace. Since the summer days in Greece are extremely hot, being in the open sun for 7 hours can ruin the whole “enjoying the open sea” experience.

There is an open bar on the second floor available during the entire cruise. Next to the bar there is a restaurant where you can order from a list of Greek foods – a delicious souvlaki, gyros, sandwiches etc. I expected the prices to be higher than the usual ones in the city, but they were quite affordable so there is no need to worry about getting hungry or thirsty and having to pack whole bags of food for the day.

Boarding and Leaving the Port

I must say, I was a bit disappointed when I saw the crowd waiting to hop in. If you go in July or August when it’s the high season, expect to board an overcrowded boat. Luckily, we managed to find free seats on the third floor.

Because of the crowd, the boats always leave later than the scheduled time of 9:00 AM, so we started the cruise at around 9:30-9:45 AM. 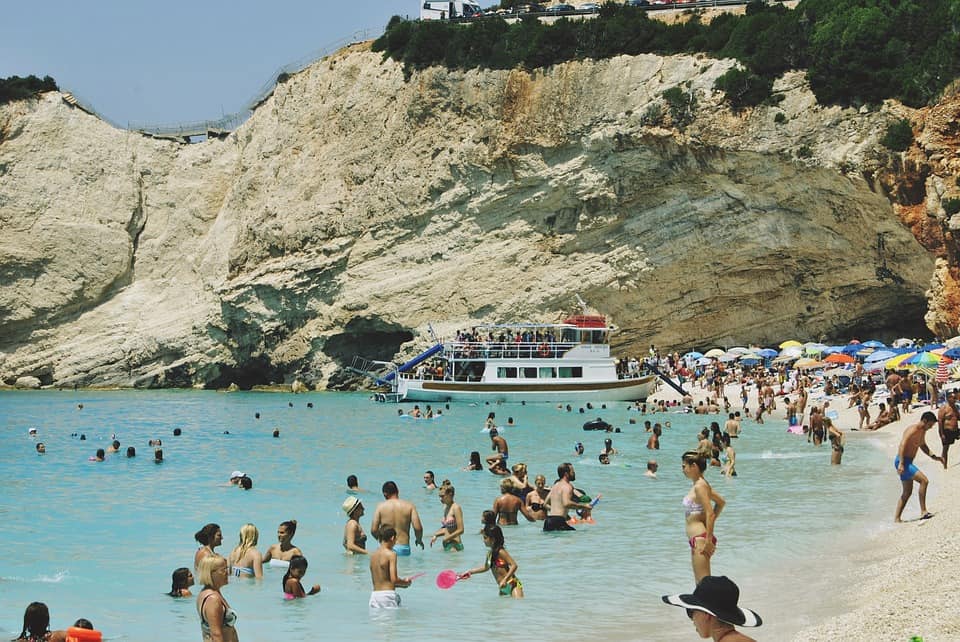 The boat captain welcomes everyone by playing Sirtaki (Greek national dance music) and reads a few guidelines for a safe and pleasant Lefkada day trip cruise.

There were multiple-language translators which repeated everything the captain said in in a few different languages, which is something I personally really liked because it showed that the captain appreciates the diversity of the tourists that are on the cruise. 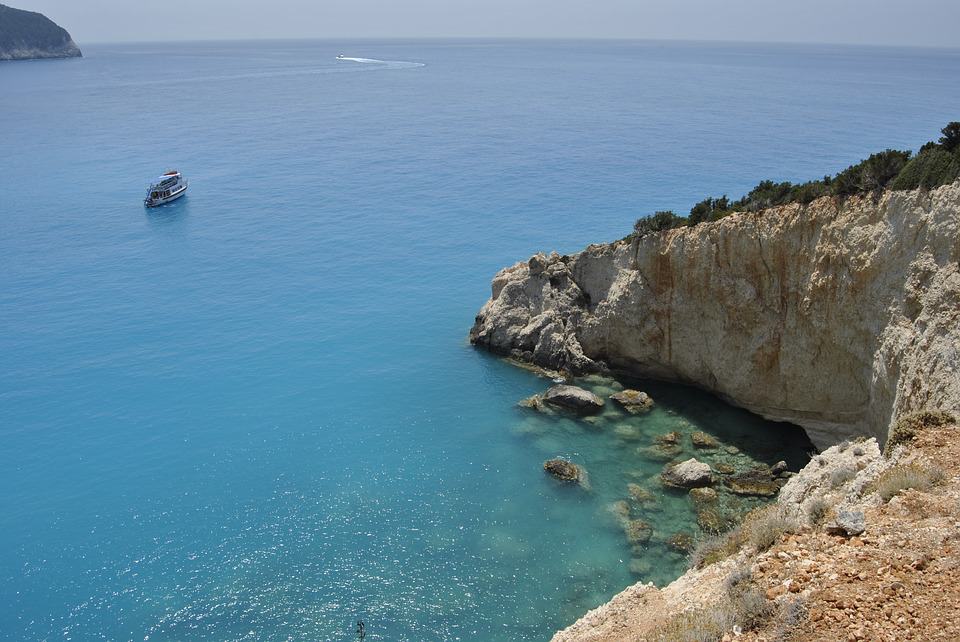 After an hour-long boat ride, we arrived at Egremni beach, known as one of the world’s most beautiful beaches. Even after it was ruined in an earthquake in 2015, it still remains a top tourist destination.

The endless blue sea is something I was used to seeing only on social media and always thought to myself “Oh wow, these photos are photoshopped pretty well”. Believe it or not, they aren’t photoshopped.. It does look like that even without filters and edits.

The boat stops here for about 45 minutes and you can relax and swim around freely during that time. But, there is one rule – do not go near the rocks. The earthquake has left behind harmful consequences making the rocky soil sensitive, so there is a constant risk of rock sliding down or in the worst-case scenario – the rocky reef falling apart.

Porto Katsiki is just next to Egremni and is mostly always overcrowded with people. The boat is supposed to stop here too, but since there is no room for it to anchor, it usually just passes by and stops near the beach for people who want to jump off the freeboards or swim around for a few minutes.

Next up is Meganisi – Cave of Papanikolis 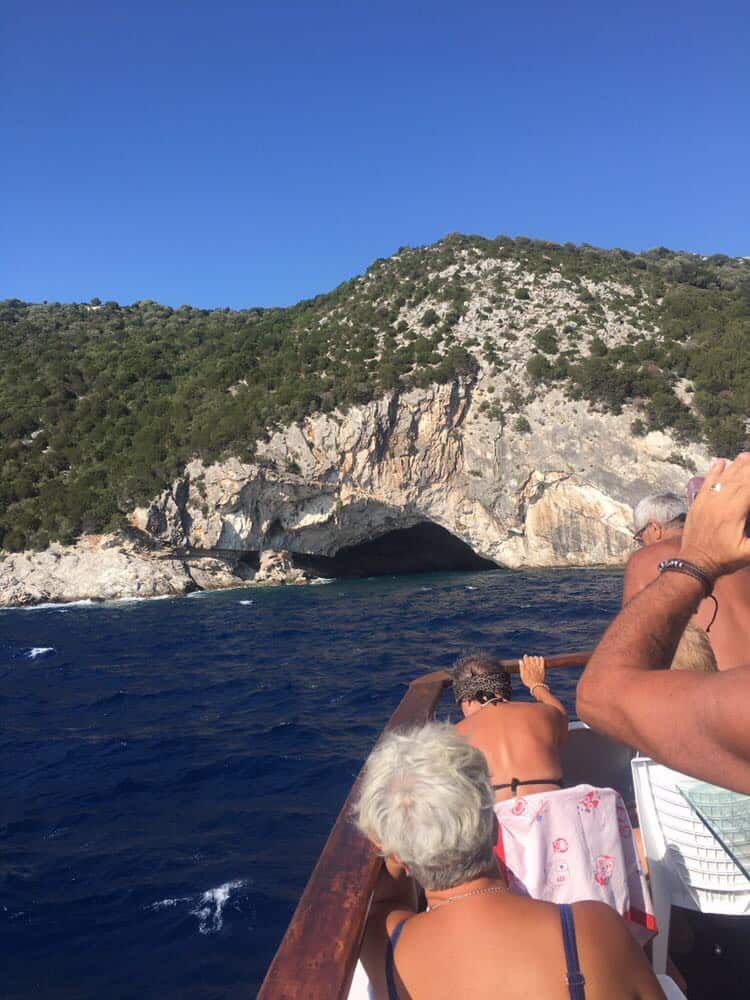 This was just a short stop. The cave is known as a famous hideout for a captain’ Papanikolis’ submarine during WWII. It’s a cool place to see if you’re into history and war tactics.

The boat briefly enters the cave for photographing and continues towards the next stop. 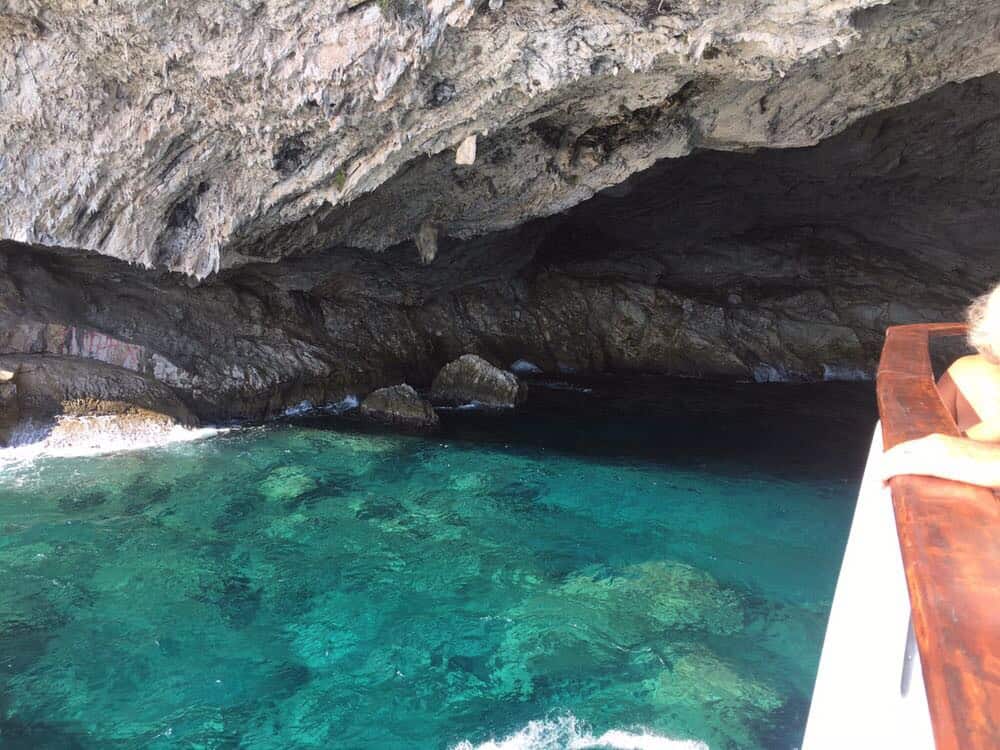 The next stop is Kefalonia, to be exact – Fiscardo

This was my favorite destination of the whole Lefkada day trip cruise. It’s a small fishing village locals call “the diamond of the Ionian”. You could instantly feel the smell of fresh seafood being cooked the minute you step off the boat. We stopped here for lunch and sightseeing for around an hour or so.

While I was walking down the port, I saw this cute-looking sweets shop that had people lined up in front of it. So, I went over there to see what everyone was waiting for and see this small, cake shop with ice cream, waffles, and Greek yogurt. The shop is a self-service one, where you pick what you will take and you can decorate that with different toppings of your own choice.  You pay according to the weight of your selection. I had never tried Greek yogurt before, so I decided to give it a try. I put some cherries, Oreos, and some white chocolate on top and went to the cash-out. I paid only 10 EUR for the two you can see in the photo.

My opinion on Greek yogurt? Wish I had one in my hand right now.

If you’re familiar with Greek mythology, you will love Ithaca. It’s known as the island that Odysseus lives in and returns to after the journey that changed his life.

While we were cruising around the island, the captain was telling us about the history of the islands, the locals, and their traditions, as well as notable events involving these locations. 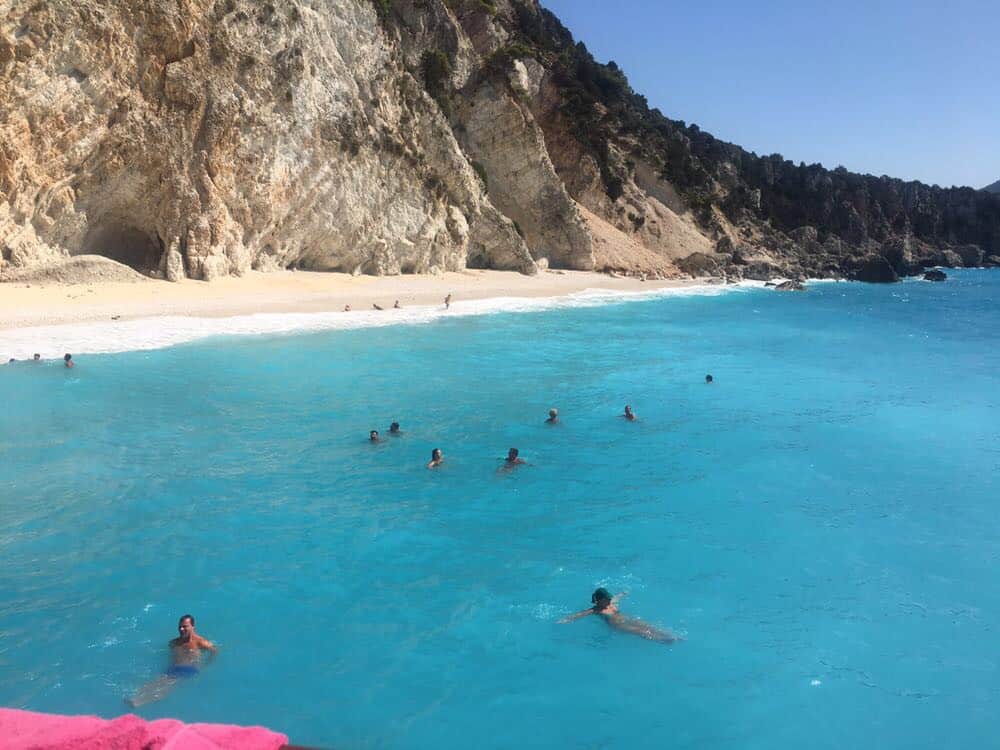 This famous trio of islands is known for their long, golden sandy beaches. There is a 30-minute stop for an afternoon swim on the private island of Skorpios, owned by the shipping magnate Onassis. A much-needed swim after the long day under the sun. The East beach where we stopped was created by Onassis by bringing sand from Salamis Island.

The Lefkada day trip cruise goes around the island destinations in a moon-like shape, so after Scorpios, it goes back to Nydri port where we end our cruise. There is a gift from the boat crew for the passengers, a free ticket and boat ride for island parties happening every Wednesday and Saturday. We didn’t manage to go to the party, but if you did/will, tell us how everything went!

So, that’s all for my one-day boat cruise experience. 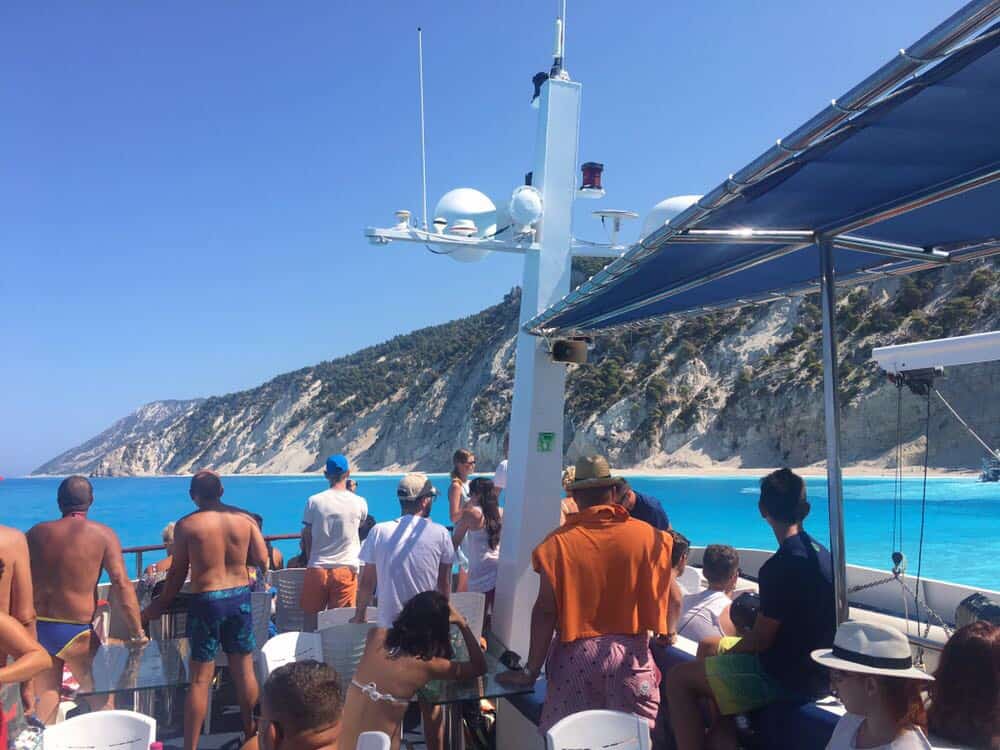 Did I enjoy it? Definitely. Would I do it again? Not so sure. It’s a nice experience, but having just half an hour to swim and enjoy the beach is too little and too rushed for me. I’d rather tan for a few hours with a Mojito in my hand.

But I still see it as a valuable experience everyone should put on their bucket list. It’s the best opportunity you have to go and visit all the wonderful beaches of Lefkada without having to drive around for hours and spend a lot of gas money.

The sights you will see are truly unforgettable and will make you fall more in love in Lefkada.

(Looking for more things to do in Greece? 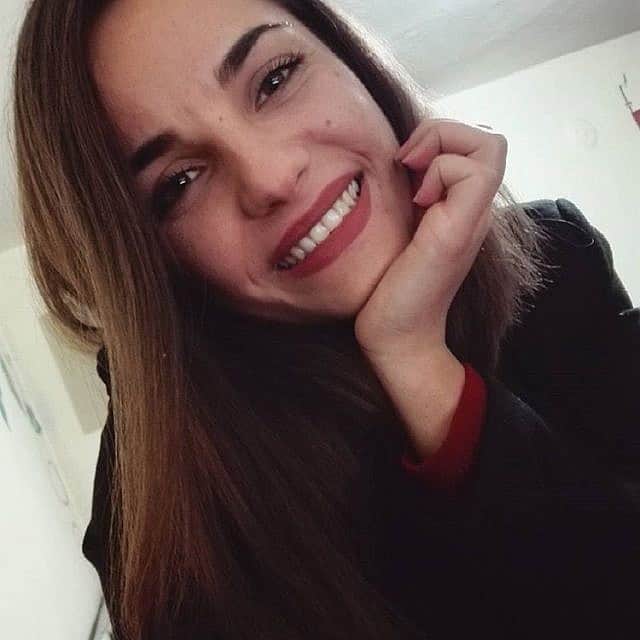 Angela is a young, passionate, 24-year old freelance writer. The desire to read and write came from being raised in a small country in Southeast Europe and wanting to explore as much as one could. She loves a challenge, which is why her portfolio of past projects is as weird as it can get – from baby diapers to landscaping projects, so there isn’t much she hasn’t written about. Games are a guilty pleasure of hers. Has pleasure doing it, feels guilty for not having more time to do it.