Skopje is one of the strangest looking capital cities I’ve been to.

It’s an eclectic mish-mash of huge monumental sculptures, imposing building facades, winding cobbled streets and cheesy fake pirate ships. There’s a new style around every corner, from baroque to neoclassical to Las-Vegas-style kitsch. When you look deeper, there’s a character-rich Ottoman Old Town and over 1500 years of history to explore.

With cheap flights to Alexander the Great Airport from many major hubs in Western Europe and the UK – it’s worth checking out this great-value city break. Here are 13 things you should know before you visit Skopje. 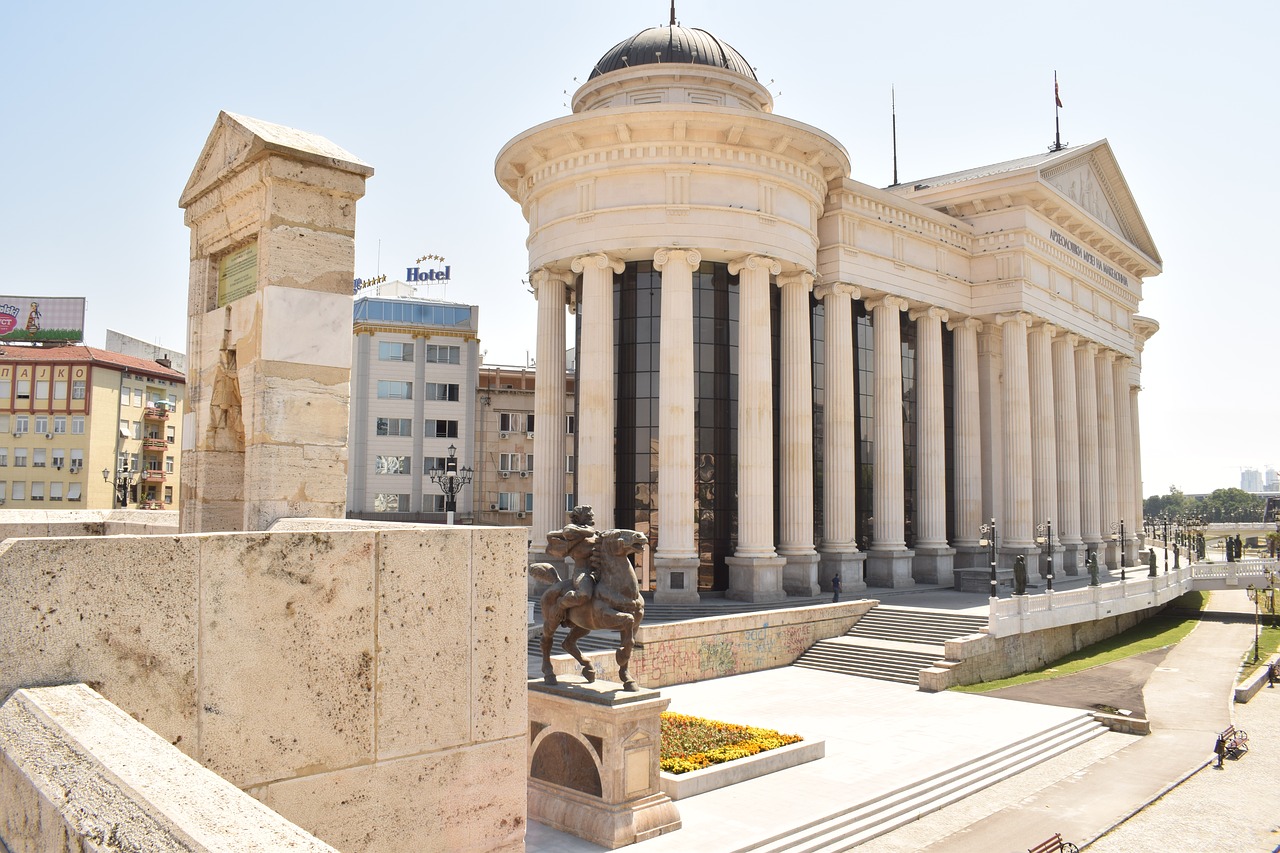 1 in 4 Macedonians Live in Skopje

The capital city has a population of 500,000 people. That’s approximately a quarter of the overall population of the country – 2.1 million.

This means that Skopje counts as a “Primate City.” This means it is the only large financial, political and population center of a country and is not rivaled by any other city. In order to qualify as a Primate City, it must have at least twice the population of the second largest city.

It is usually a sign of an imbalance in development, where the city has a progressive core and the rest of the country depends on it for cultural, economic and political needs. For example, most youth move to the city for jobs, opportunities and culture.

Other primate cities include London, Paris, Lima and Dublin. Bangkok is the “most primate” primate city – as it is 40 times larger than the second city in Thailand.

(I find the concept of Primate Cities fascinating, but for some reason every time I bring it up people don’t believe me? Maybe they think I have it confused with Ape City in Planet of the Apes?) 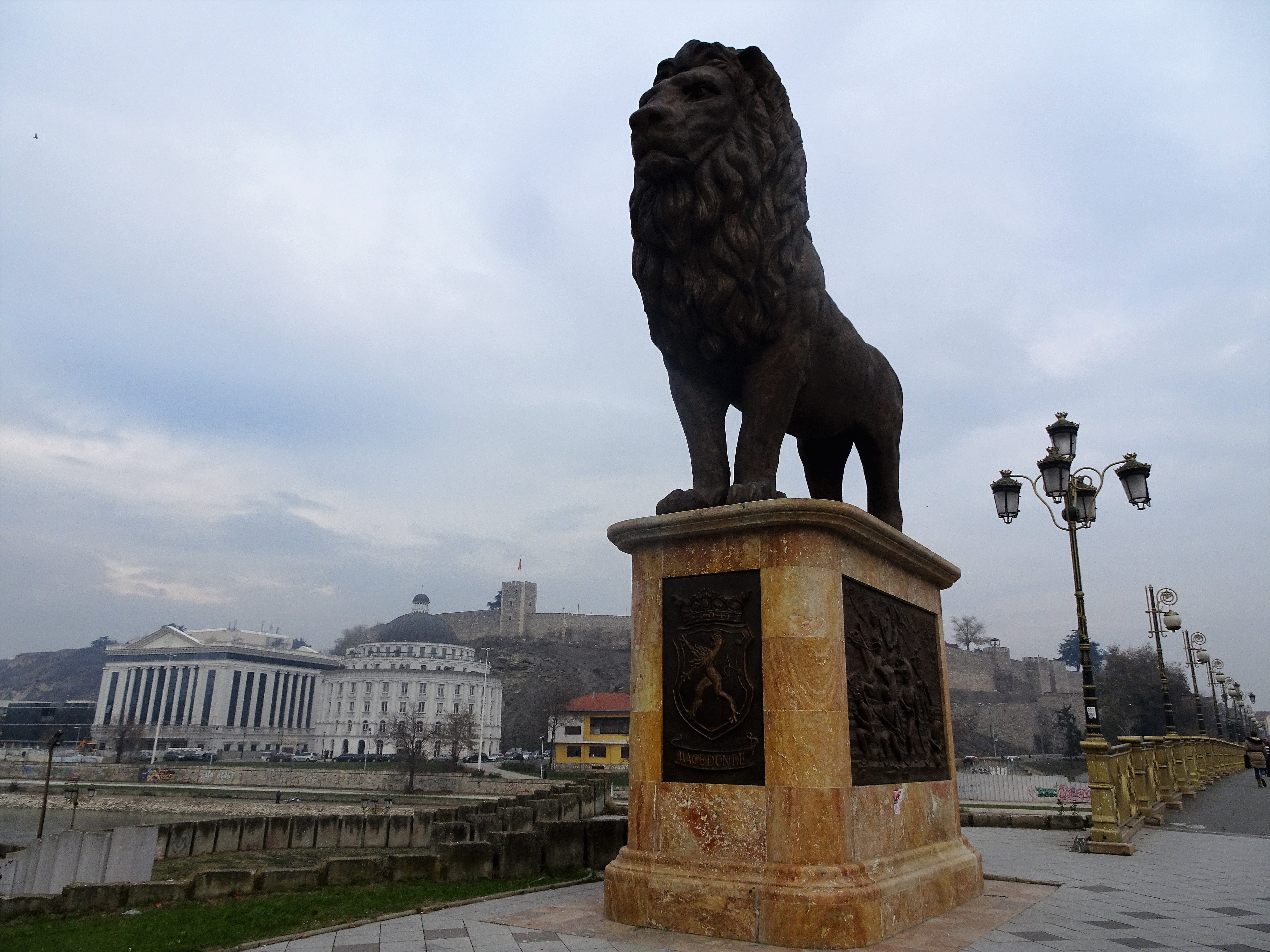 Skopje is hard to pronounce, but very easy to enjoy (although not as bad as Mtskheta, Georgia) Lee and I struggled with it for a while… is the “je” silent? Skope-gee? Skoopjay?

I finally just googled it to find out. Here’s the correct pronunciation. I’ve also heard it pronounced with the “j” more like the “y” in you. As in “Scope-yuh.”

So, now you can tell people where you are going with confidence! 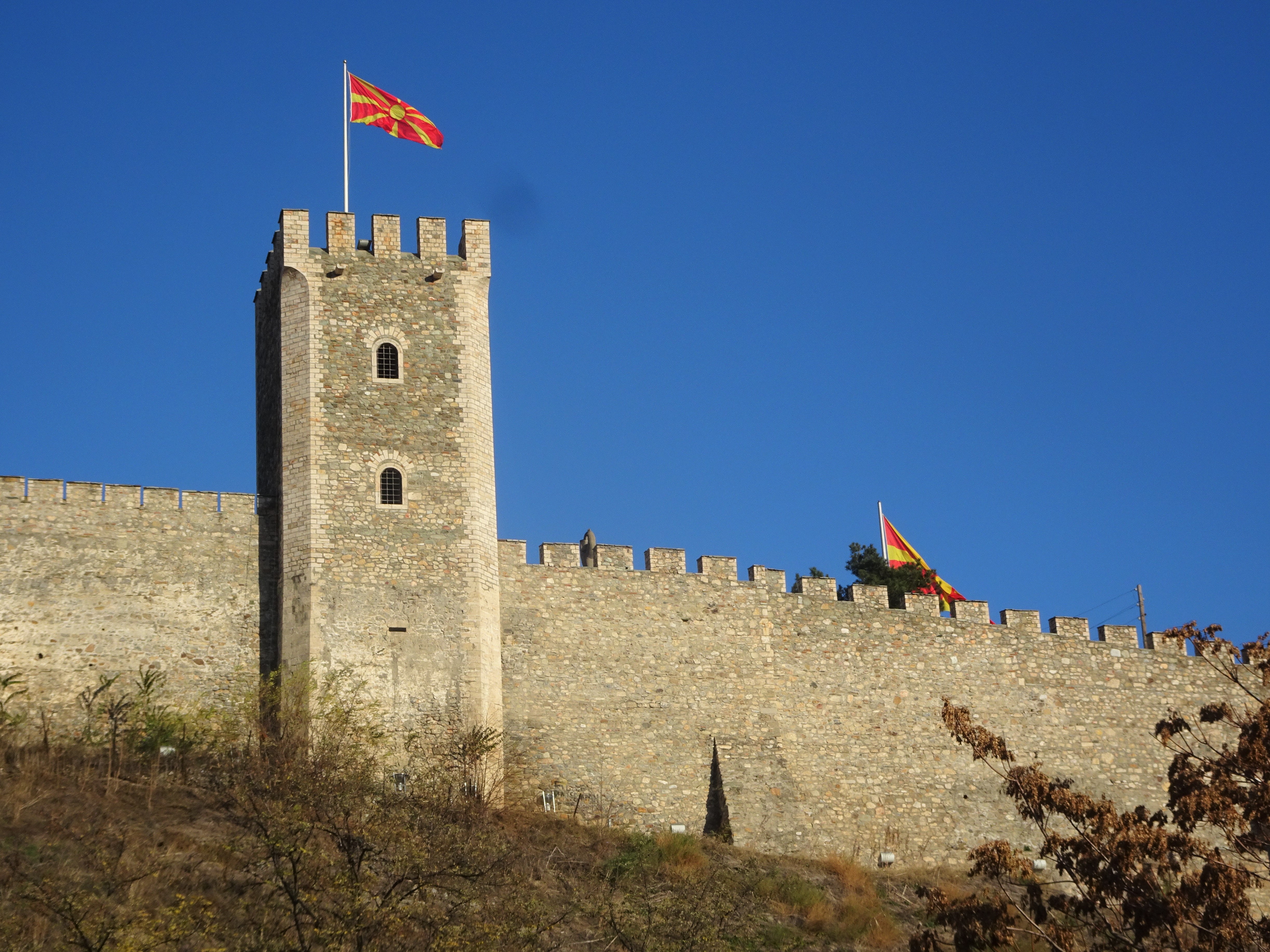 This location has been inhabited since at least 4000 BC and Neolithic remains have been found at the Kale Fortress. It has been ruled over by many different people, from the Romans to the Dardanians to the Byzantines to the Turks to the Serbians.

It comes as no surprise that this city has been fought over throughout the ages. After all, it’s located in a great position on the Vardar River – on a major north-south route through the Balkans between Athens and Belgrade.

The large Stone Bridge at the heart of the city dates back to the 6th century. It’s the main pedestrian connection between the modern city and the Čaršija – the Ottoman Old Town. You’ll really get a sense of the history there as you wander through the maze of narrow cobblestone streets lined with teahouses, shops and mosques. 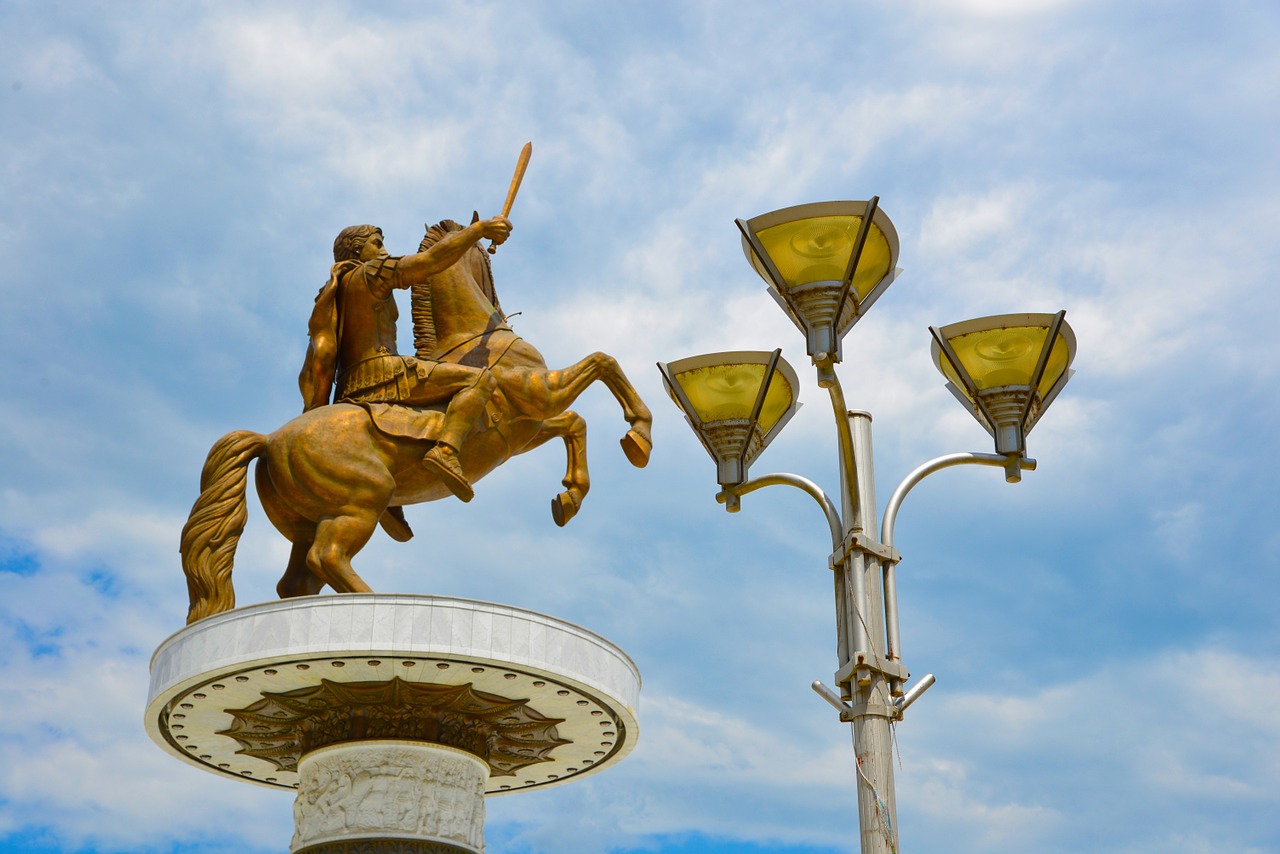 An Earthquake Shook the City in 1963

On July 26th, 1963, a 6.1 magnitude earthquake hit the city of Skopje. (That was back when it was part of the Socialist Federal Republic of Yugoslavia.) This devastating event killed more than a thousand people an injured between 3,000 and 4,000. Approximately 80% of the city was destroyed and more than 20,000 people were left homeless.

When it happened, dozens of countries rushed to Skopje’s aid. Over the next few years, around 80 countries would contribute in some way or another to the effort of repairing Skopje. Responding to this tragedy kind of brought the world together during this tumultuous time.

The city was rebuilt and many of the historic memorials have been restored. This isn’t the first time Skopje has been affected by an earthquake. A massive quake in 518 A.D. also destroyed the city. 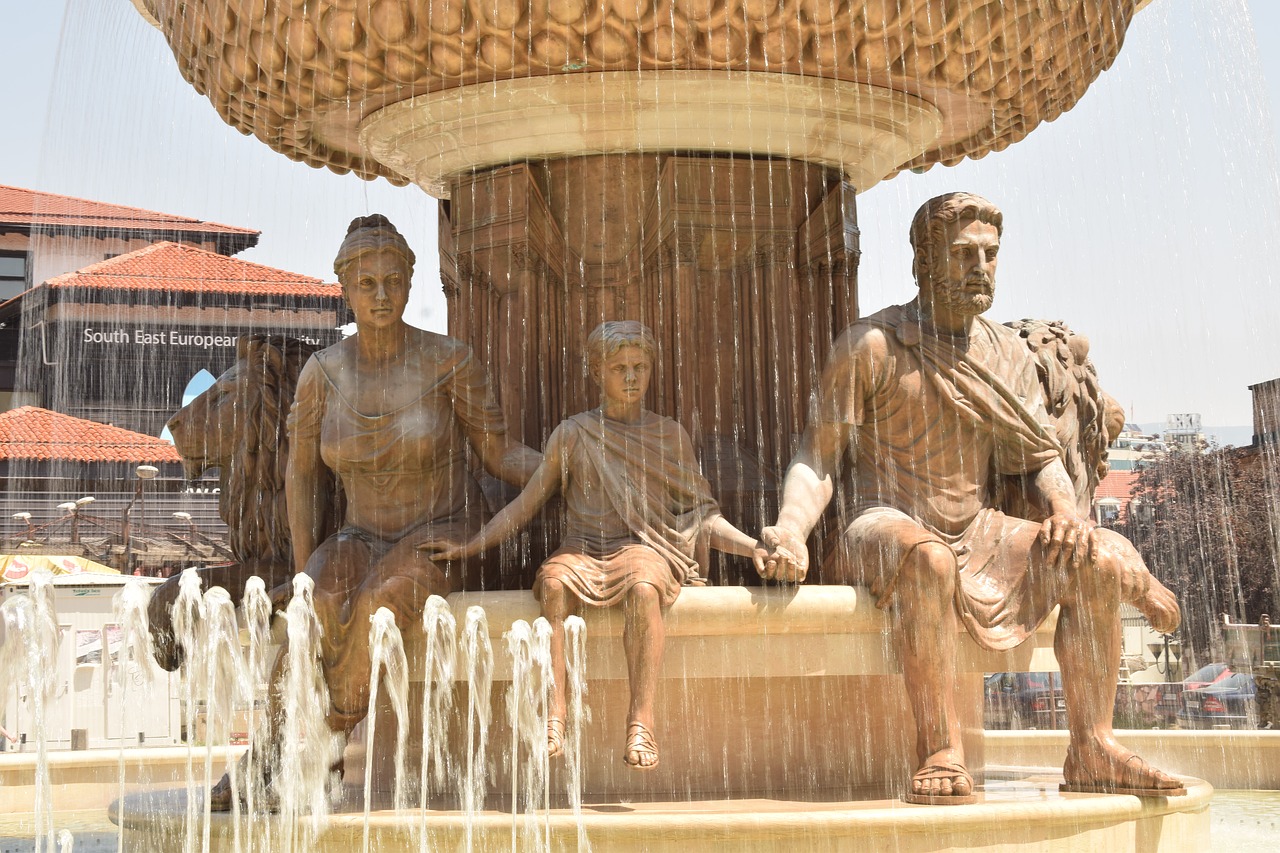 There’s a Ridiculous Amount of Statues

No matter where you go in the city centre of Skopje, there will always be a statue looking at you. Riding a majestic horse, standing stoically or even shining shoes, the bronze and marble citizens of Skopje are everywhere you go. There’s even a bronze woman down by the river in a swimsuit, poised to jump into the water.

Apparently Macedonians like to joke that there are more statues in Skopje than there are people. The government built the statues as a way to boost tourism after the economy crashed in 2008. They spent millions making the capital more “aesthetically pleasing” by sticking statues everywhere they possibly could.

The locals were slightly annoyed, as they would rather the government spend millions on something a little more practical – such as a metro system or improving prominent buildings. But, the government decided that an army of bronze people was just what they needed to solve everyone’s problems. 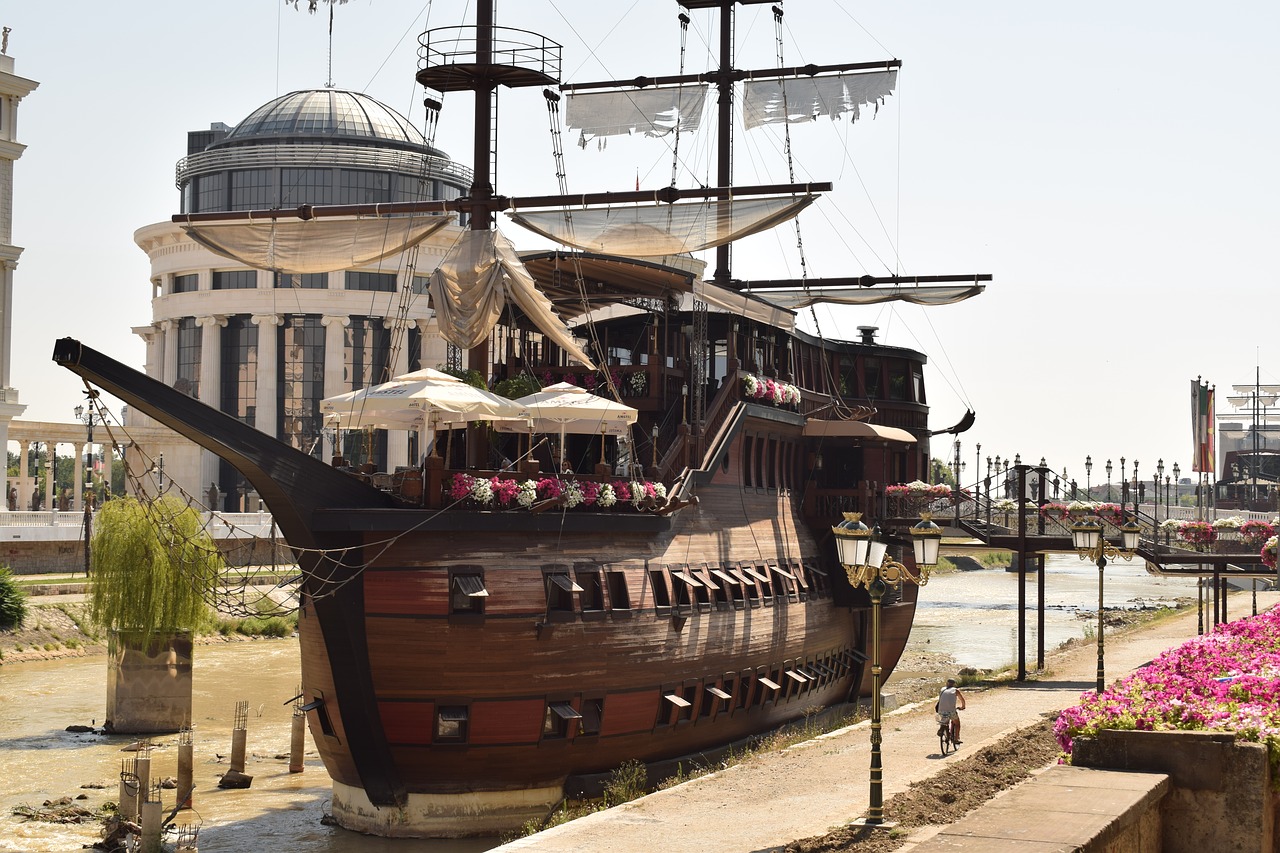 Oh, and also some Pirate Ships

In addition to the Vegas-like collection of over-the-top statues in Skopje, there’s another feature that helps it earn the title of “Capital of Kitsch.”

(Yes, Macedonia is a landlocked country. None of this makes any sense.)

The pirate ships are not real – they are replica galleons firmly rooted to the riverbed with on cement bases. No pirates ever sailed on the Vardar and even if they wanted to, a ship that size wouldn’t fit beneath the ancient stone bridges.

They are meant to resemble wooden sailing ships from the 16th to 18th centuries, but the fact that they are so obviously out of place makes them feel more like a Pirates of the Caribbean attraction at Disneyland. 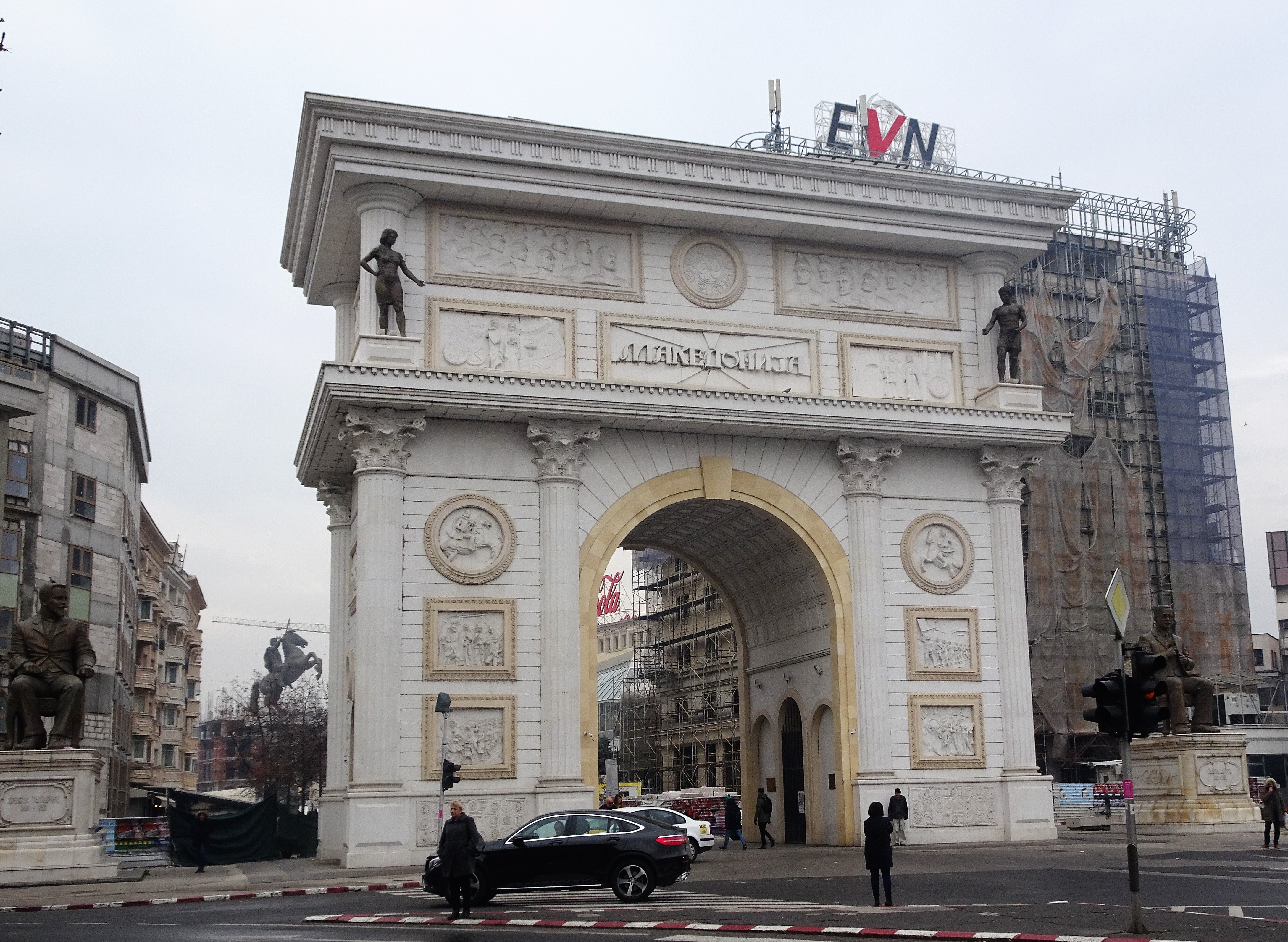 Plus, a Mini Arc de Triomphe

The Porta Macedonia looks like a mini-version of the enormous Arc de Triomphe in Paris, and it was another grandiose sculpture from Skopje kitsch makeover project.

The arch represents 20 years of Macedonian independence and it is covered in marble reliefs that depict the country’s history. It was also criticised for its size when it was built in 2012. It cost $4.4 million Euro. 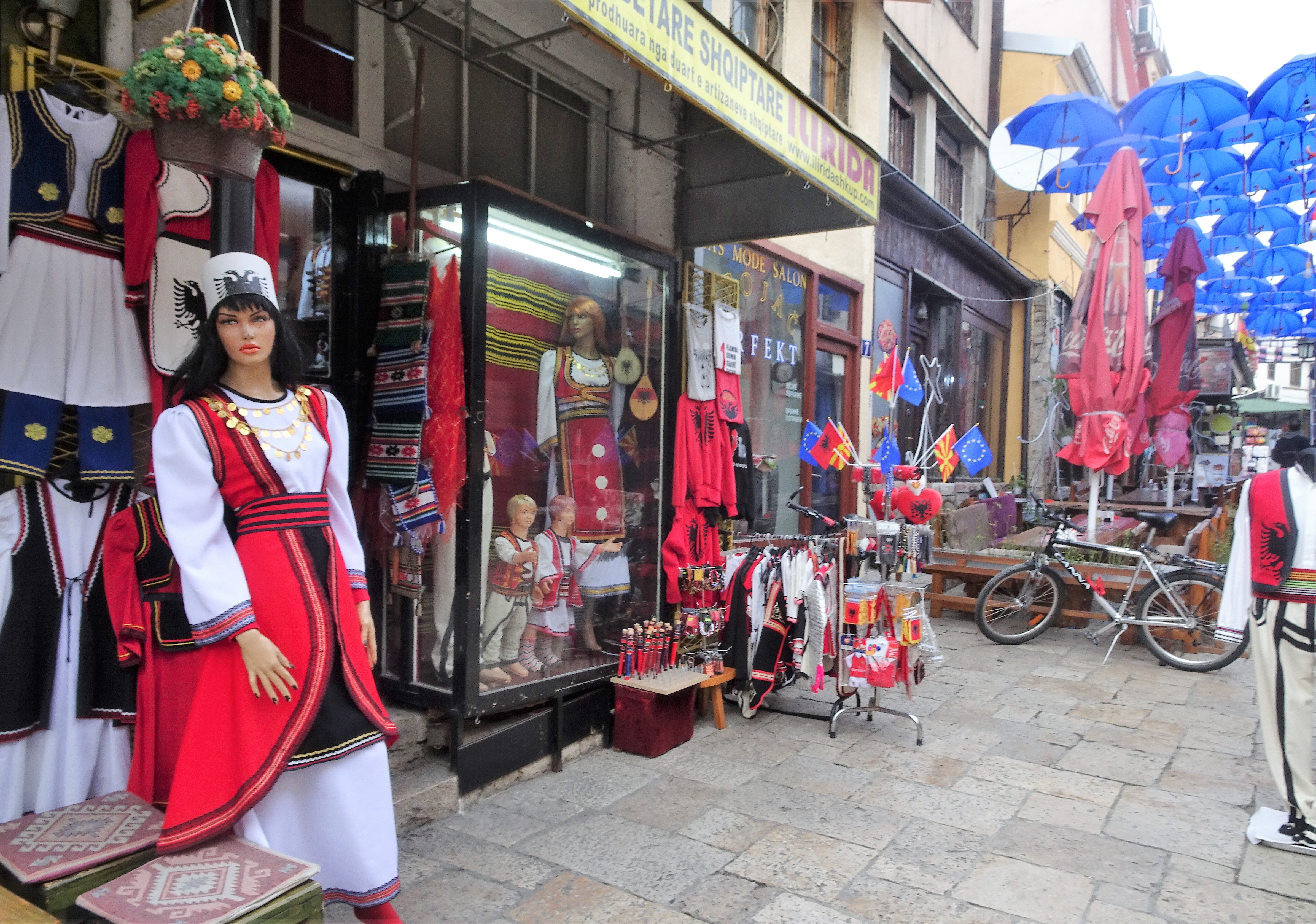 The Old Bazaar is Worth Exploring

The Old Bazaar, located on the eastern bank of the Vardar river, is one of the oldest and largest marketplaces in the Balkans. It has been the main centre of trade and commerce in Skopje since the 12th century.

It was during the 16th and 17th century when the Old Bazaar reached its economic peak and has one of the largest and most significant old bazaars in the Balkans. This is where all of the social elites of the capital would have mixed and mingled at that time.

These days, it’s a protected national landmark and has many old craft shops. Age-old traditions are still kept alive here, by coppersmiths, cobblers and goldsmiths. You can also find plenty of museums and galleries, as well as great restaurants offering local food at affordable prices. 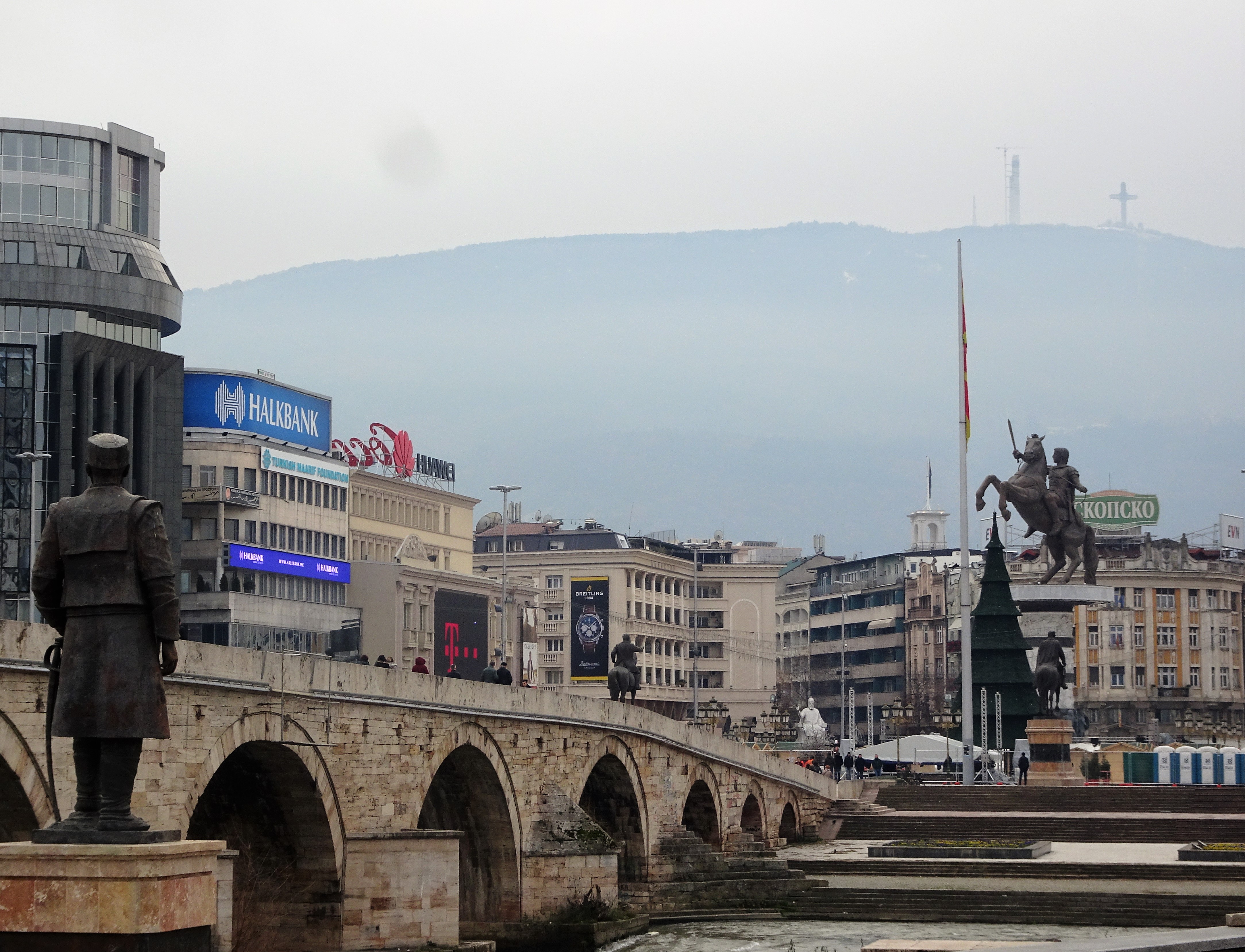 The enormous cross on the top of the Vodno Mountain can be seen from anywhere in the city. It’s a 217 foot tall monument built to mark 2,000 years of Christianity in Macedonia and the world.

If you want to check it out more closely, you can take the Millennium Cross Cable Car. The journey will take you gliding slowly up the mountain on a 6-8 minute journey, with spectacular views of the city.

It’s also a pretty good value tourist attraction – the cost of the cable car is 120 Macedonian denar – which is around 2 Euro. 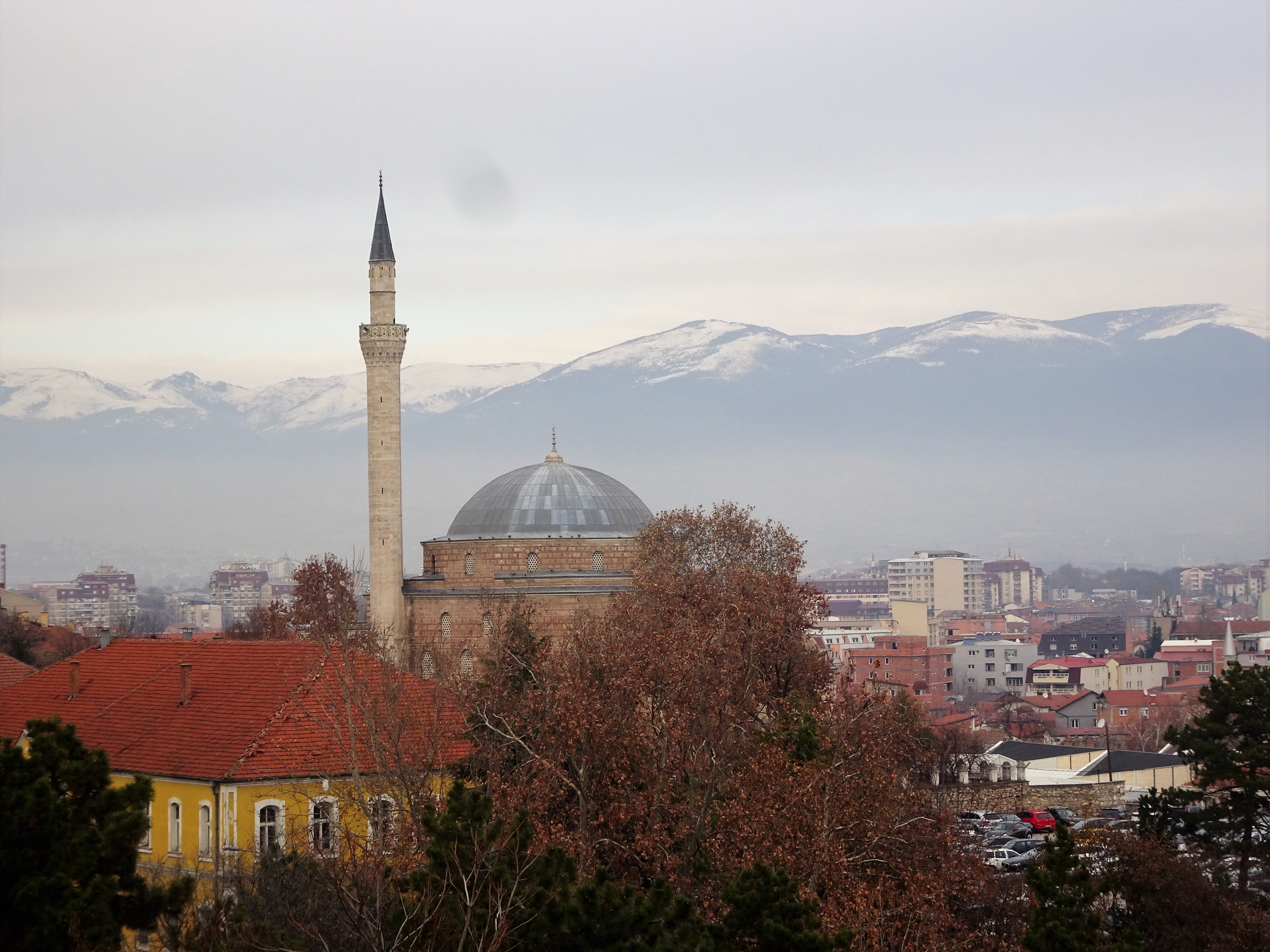 Macedonia Is Not Part of the Schengen

Traveling through Europe can get a bit complicated, as you have to be careful not to violate the visa policy of the Schengen area. This is set by the European Union and for most visitors, it means that you can only stay for up to 90 days in any 180 day period. If you’re backpacking through multiple European countries, this can really add up quickly.

But the good news is that Macedonia is NOT part of the Schengen. It has its own visa policy which essentially allows most countries to enter Macedonia visa free and stay for up to 90 days. This gives you a lot more freedom with your travel schedule, so you have more time to relax and enjoy Macedonia. 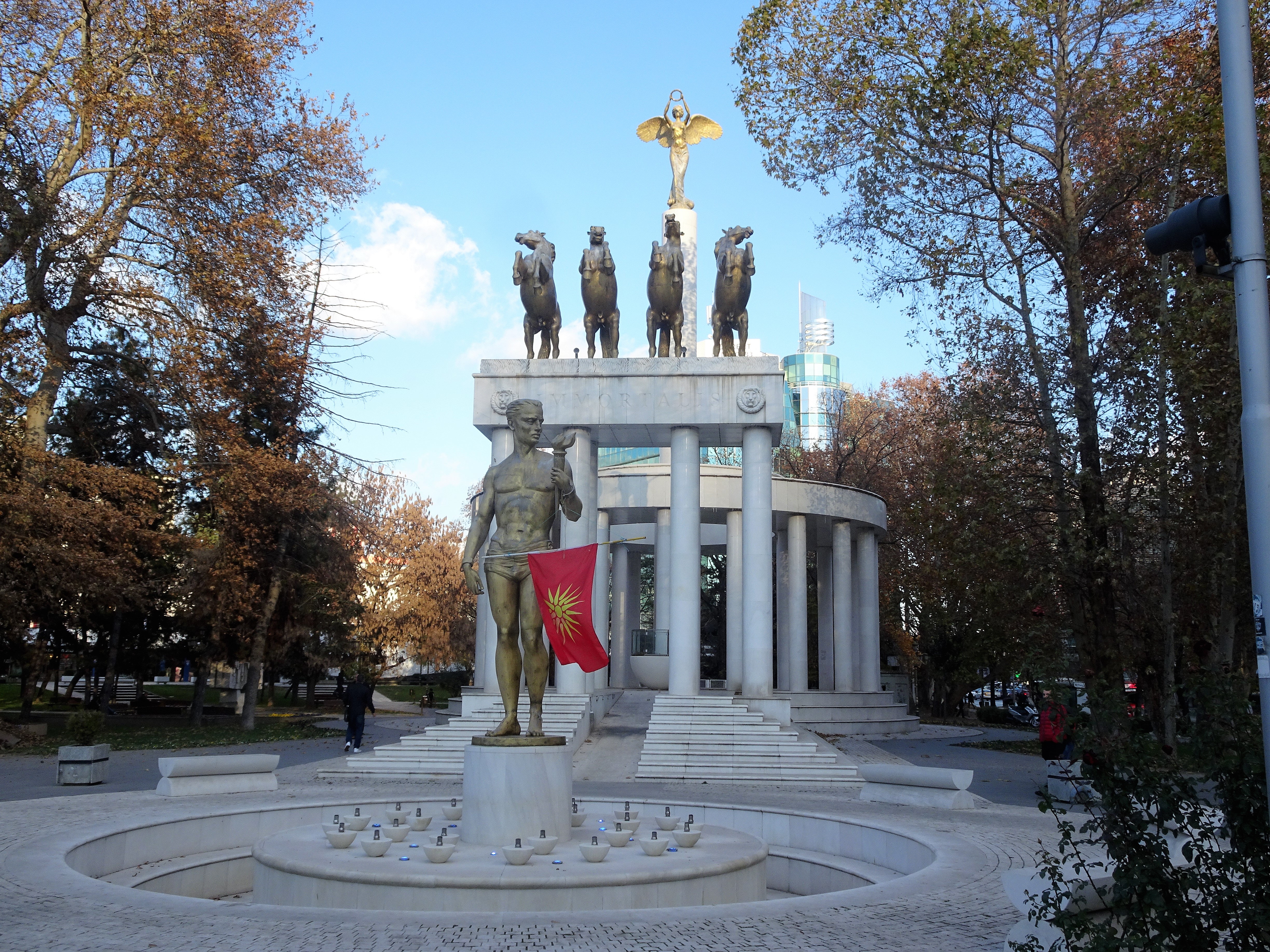 There’s Some Controversy About the Name “Macedonia”

Just so you know the political background, you should be aware that the name “Macedonia” is disputed. There are many people (mostly in Greece) who believe the country should be called “The Former Yugoslav Republic of Macedonia” (aka FYROM).

This is because Macedonia is the name of an ancient region in Greece. They believe that the name Macedonia infringes on Greek territory. There is a fear that Macedonia is challenging Greek national identity and stealing their history.

However, Macedonians hate the idea of calling themselves FYROM, as it is a reminder of community times. It’s a tricky situation and if you’d like to learn more about the complexities of it, here’s a more in-depth explanation. 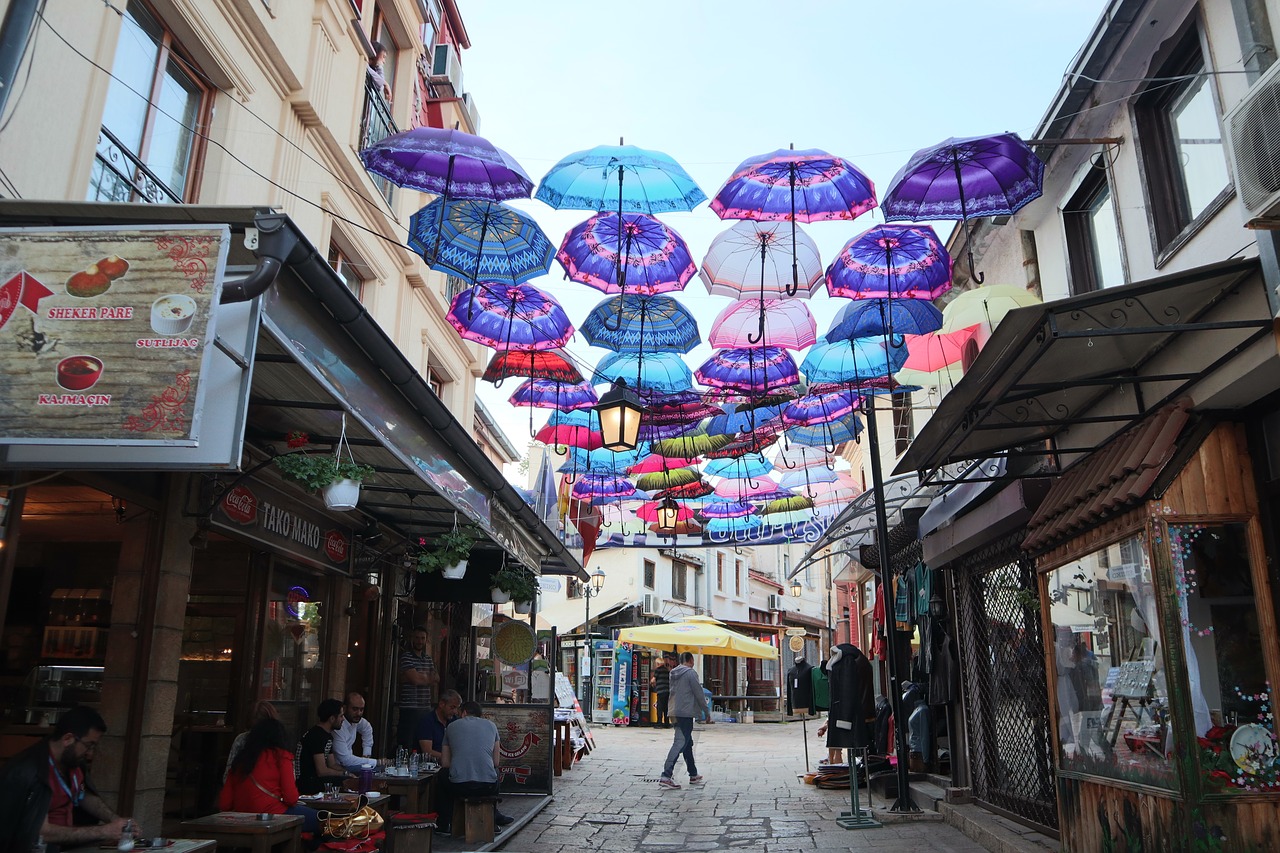 Smoking Is Allowed in Restaurants

If you are coming from a country where smoking indoors has been banned, it might come as a shock to see people smoking in restaurants when you visit Skopje.

Macedonia is in the top five countries with the highest annual cigarette consumption, according to the Tobacco Atlas Rankings. In 2008, the country prohibited smoking in all public places except for gardens and terraces that were open on at least 3 sides.

However, amendments to this law were made in March 2018 to make it less strict. Restaurants are now able to enclose these terraces and designate them as smoking areas. The amendments were made because the MPs who opposed them argued that they were damaging the hospitality industry and infringing on smokers rights. 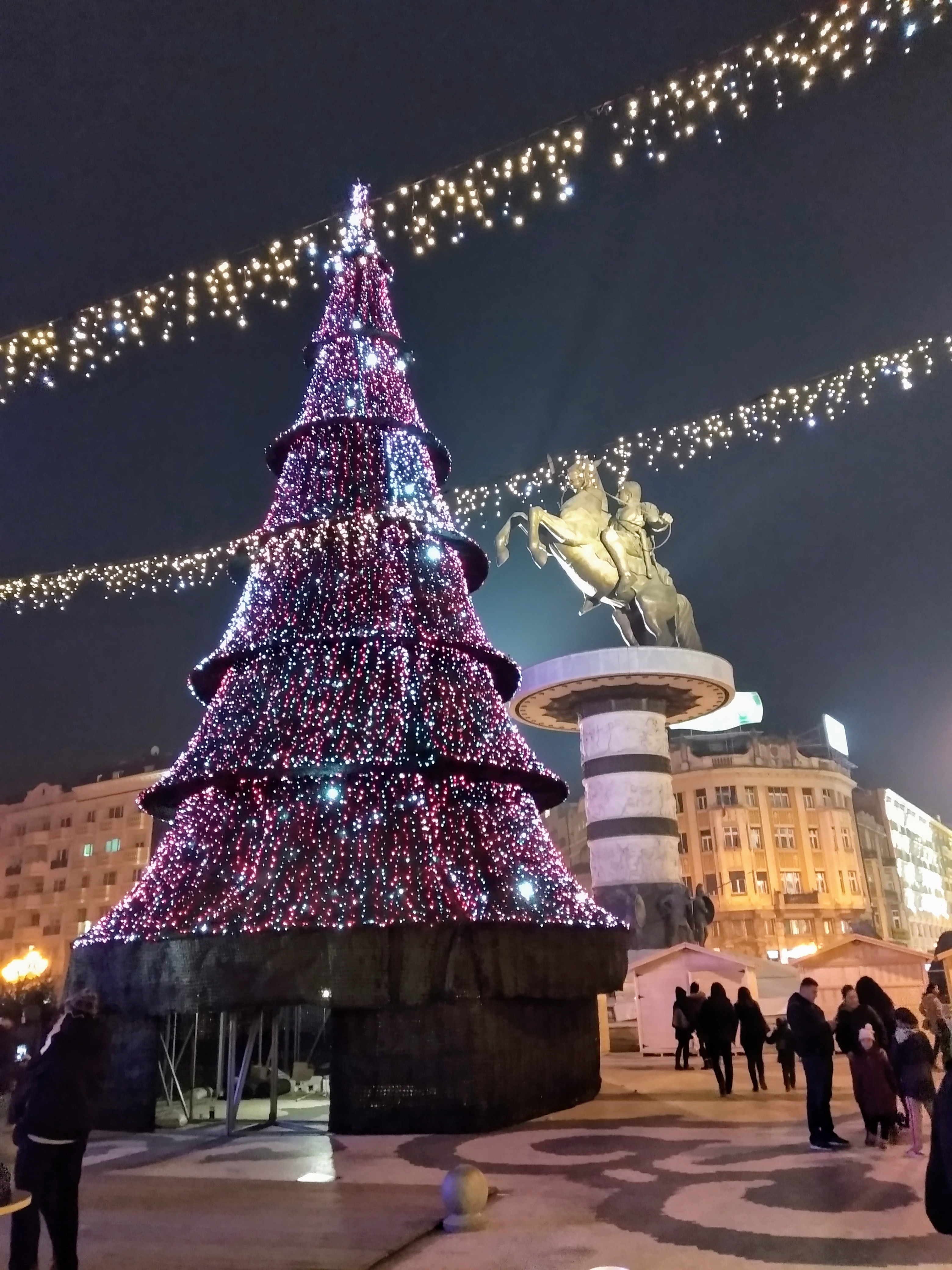 It’s Beautiful in The Winter

The peak summer season is not the only good time to visit Skopje. This city is a great place to explore in the winter as well. There was a sparkling Christmas tree in the square and twinkling lights everywhere.

The decorations give it a sense of cosy, winter wonderland magic and will put you in the mood. Plus, there’s a little market in the square serving up mini-donuts, hot chocolate and other treats. You’ll have to bundle up against the cold, but you’ll enjoy cheaper prices and fewer crowds.

PS. Want to learn more about the country of Macedonia? Our guest author Daniel wrote 13 Things You Must Know Before You Visit Macedonia.