Even though it is only a few hours by boat from the main tourist hub in Borneo, Kota Kinabalu, the island of Labuan hasn’t yet become a very popular destination for Western travellers. When we visited, the streets were quiet and our beachside hotel was relatively empty. We felt like we had stumbled on a little secret paradise with great beaches, duty free shopping and cheap drinks!

Granted, it might be easy to skip this island while traveling through Borneo, as it requires a boat ride to get there and back. However, if you have the time Labuan is definitely worth including in your itinerary.

Labuan – A Federal Territory of Malaysia

So is Labuan part of Malaysia or not? The answer is that it is a “Federal Territory of Malaysia”. Labuan used to be part of the Sultanate of Brunei and in the 1840s it became a base for the British to fight against piracy in the South China Sea – so the Sultan of Brunei ceded Labuan to the UK. In 1848 the island became a Crown Colony. In 1904, it was reverted to British government rule and two years later it was administered from Singapore after being added to the Straits Settlements.

Labuan was occupied by Japan from 1941 until 1945 in the midst of World War II – when it was renamed Maida Island. In 1945, it was liberated by the Australian 9th Division and took back its former name.

In 1963, Labuan became a part of the state of Sabah in Malaysia. It stayed that way until 1984, when it was ceded by Sabah to the federal government so that it could become a federal territory. In the year 1990, it became a free trade zone and an international offshore financial hub.

These freedoms make Labuan a very desirable location for operating a business – offering 3% tax, low operational costs, very lax exchange controls and much more. These days, it is a base for more than 6,500 offshore companies as well as 300 financial institutions and banks.

When you are visiting Labuan, it is a faux pas to tell a local that their island belongs to Malaysia or Sabah. Many of the inhabitants of Labuan are very proud of the status of Labuan as a Federal Territory of Malaysia. The island has its own flag and anthem and it hasn’t been a part of Sabah since the Labuan agreement of 1984.

Cheaper Beer than Anywhere in Malaysia

One of the small disadvantages to traveling in Malaysia is that this country has very high prices on beer, due to high taxes. After a few months of travelling through Peninsular Malaysia and Borneo, Lee and I were thrilled to discover that the alcohol on Labuan was cheaper than we had seen in a long time! This is because Labuan is a duty-free island, so tax is not charged on alcohol. Before heading out to our beach hotel, we filled up our backpack with beer! 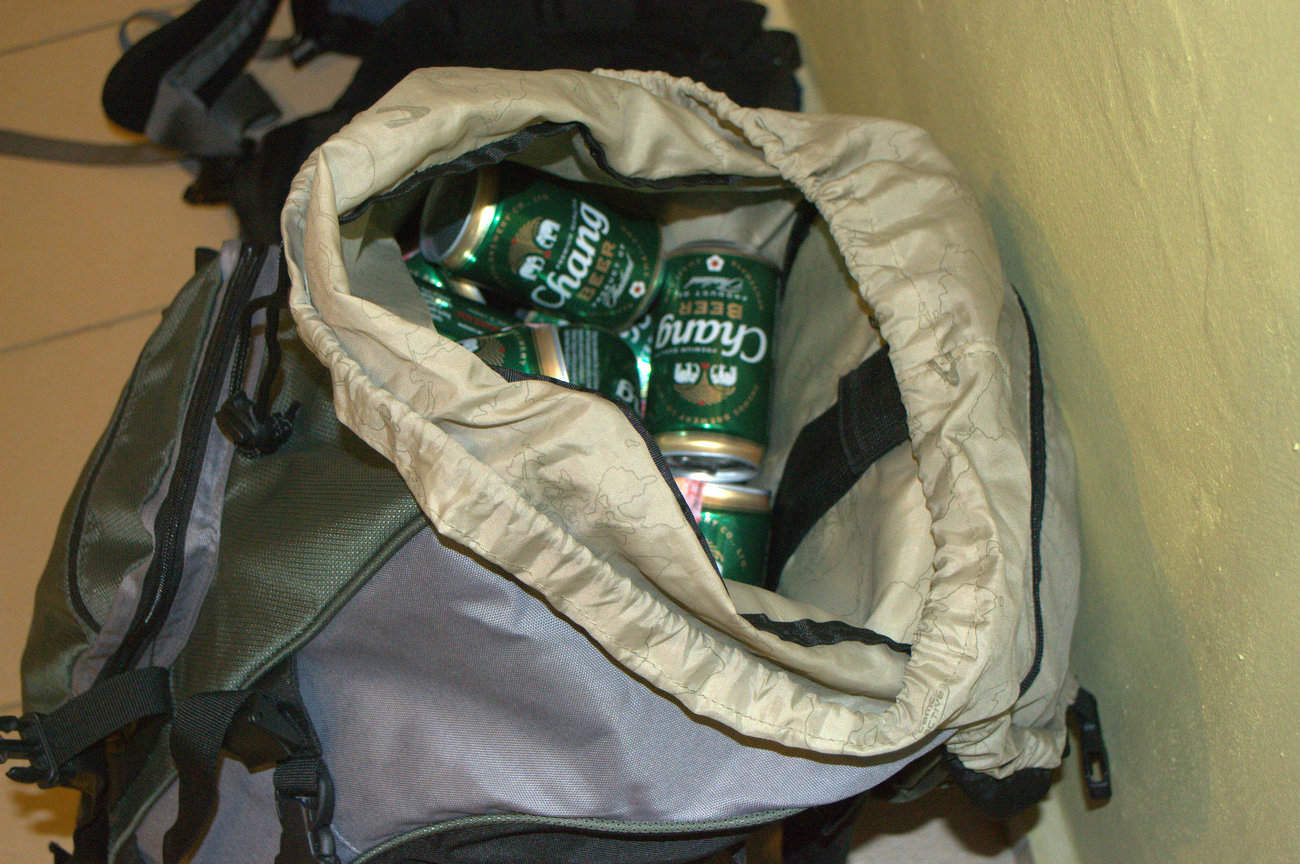 If you are not a drinker, don’t worry. Labuan also offers other pleasures at a discount thanks to the lack of taxes – such as chocolate, perfume and candy. With the amount of duty free shops, walking around in Labuan can sometimes feel like you are shopping in the world’s largest airport lobby. Make sure you leave room in your luggage.

The beaches of Labuan are of excellent quality – which is part of the reason why this island earned the nickname of “Pearl of the South China Sea”. Some of the most famous beaches include Pancur Hitam, Batu Manikar and Layang-Layangan – but there are many other secluded coves and lesser-known beaches as well. Many of the main beaches will have outdoor eating areas and public bathrooms, but outside of the weekends they are usually almost empty.

The beaches of Labuan have won the COBSEA Clean Beach Award, granted by the United Nations. This is due to the hard work for the Labuan Corporation workers, who comb the beaches every morning for rubbish.

As for the sunsets, they were simply spectacular – take a look at this photo to see for yourself: 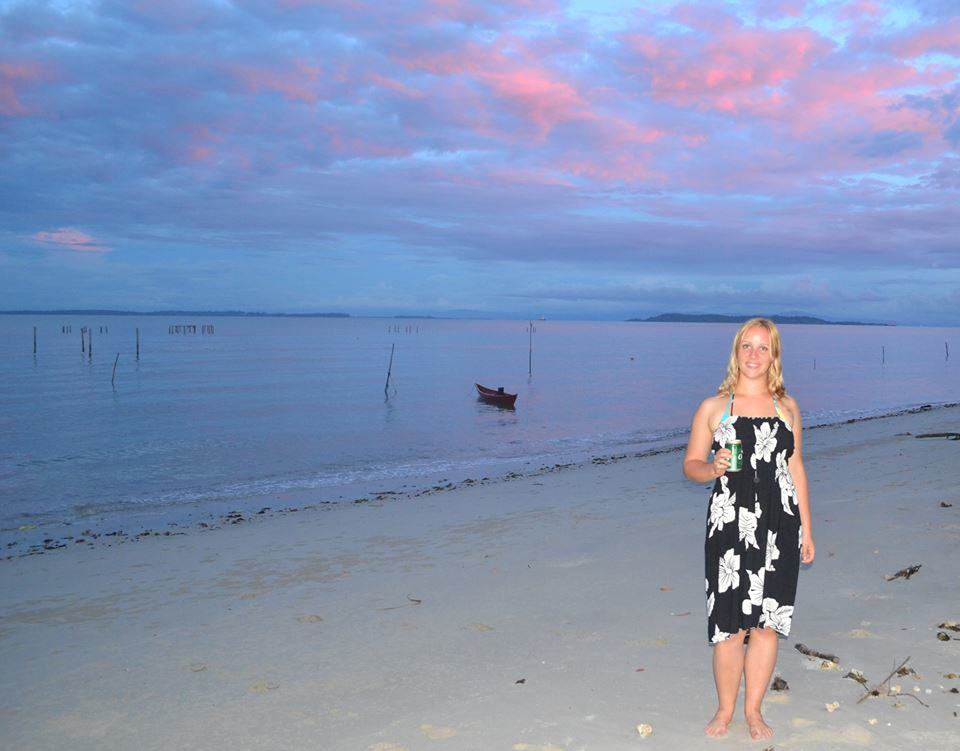 The island of Labuan has a very laid back and peaceful lifestyle, so if you are looking for somewhere to simply slow down and escape for a while – you will love it here. I spent many hours just wading in the ocean, dozing in a hammock, or eating ripe fruit in the sunshine.

The crime rate is very low in Labuan and in fact, you will hardly see very many police there because there are so few incidents. The roads are still mostly free of vehicles, which is ideal if you want to rent a car or a motorbike to tour around the island. One tip though – when driving you should pay attention to pedestrians and especially watch out for children playing in the road in rural areas.

What You Should Wear

Although Labuan is a hot and tropical destination, keep in mind that Malaysian society is mostly Muslim and quite conservative – so be respectful with your attire. In many of the bigger cities and popular tourist destinations and resorts, Malaysians are used to tourists wearing sleeveless tops and shorts. However, in remote and rural areas of Labuan you might cause a shock.

Instead of shorts, invest in a comfortable lightweight pair of long pants, a long skirt or a dress which covers your legs. A great tip is to carry a sarong with you, so that you can wrap it around you to cover your shoulders and chest. This is especially important when visiting mosques or other sacred places of worship.

Malaysian women will swim while fully dressed, but tourists are not expected to do so. However, take your sarong to the beach so that you can wrap it around yourself when you get out of the water.

Things to Do in Labuan

There are many things to do during your visit to Labuan. Here are some of the most popular attractions on the island:

Labuan is a little bit off the beaten track, so you might miss it when you are travelling around Southeast Asia. However, if you have the time and you want to relax on a peaceful and quiet beach with some cheap beers while watching a beautiful sunset, then definitely take the time to visit this island.