Whether you call this place Derry or Londonderry (and it depends a bit who you’re speaking with as to which name you use), “the maiden city” and its surrounding coastline is a fascinating part of the world.

Derry is the original name for the second-largest city in Northern Ireland, the name is derived from the Irish word for “oak grove”. The prefix of “London” was added in 1613 when King James I granted the city a Royal Charter.

The easiest way to get from the airport into town is by taxi. As we were driving in we passed a flag protest. Our driver explained that the protests (which involve people standing on the white line in the middle of the road, disrupting traffic) were triggered by the Belfast City Council’s decision to restrict the flying of the British flag at City Hall.

The view from my room at the City Hotel overlooked the Peace Bridge – an impressive footbridge spanning the River Foyle and connecting some key parts of this politically divided community. There was heavy rain sweeping across the bridge however so I opted to start my day with an indoor activity and headed to the Tower Museum which charts the establishment and history of the city.

Derry is known as the “the maiden city” because it is a walled city and its walls have never been breached in war. Built in 1613, the walls were built as defences to protect the settlers that had been relocated here from England and Scotland. 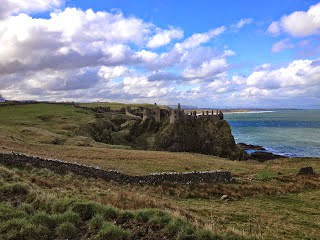 The history of Ireland is fairly complex, and the role that was played by London and its trade guilds is fascinating. To understand some of the divisions that still exist today, you have to look back to the 1500s when Ireland was caught up in a power struggle between England and Spain. When England began to establish control over London in the early 1600s, the most powerful nobles in the north of Ireland left the country – a decision referred to as the “Flight of the Earls.” England confiscated their abandoned lands and transplanted tens of thousands of protestant settlers into the Ulster region and the trade guilds of London were charged with building the city that they called Londonderry.

This was the beginning of a political and social divide between the city’s Catholic and Protestant residents – a divide that became entrenched and systemic.

With the rain easing, I signed up for a walking tour of the city with City Tours and our guide was Martin McCrossan. It was fascinating to wander through the old streets and along the walls of the city, but one of the highlights was the insights into the recent conflicts known as “The Troubles.” From the walls of the city we walked out into the residential area known as the Bogside – a Catholic neighbourhood that was the scene for civil rights marches, street battles, and Bloody Sunday when 13 unarmed civilians were shot dead by British paratroopers. Murals, memorials, and monuments throughout the Bogside continue to bear testament to the human cost of The Troubles. One of the best ways to appreciate what The Troubles meant to the people of Derry is to visit the Museum of Free Derry which tells the story of the civil rights movement of the 1960s and 70s and the conflict and violence that followed. 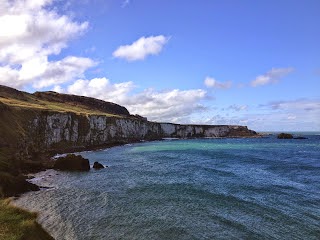 The next day I left the city behind and headed out to explore the spectacular Antrim Coast. The first stop was the Carrick-a-Rede rope bridge, surprisingly nerve-wracking even in only a slight breeze, and then out to the Giant’s Causeway. The legend is that the causeway, a bridge-like formation of interlocking basalt columns, was built by two rival giants – one Irish, one Scottish. There’s a great animation in the Visitor Centre that tells their story. The causeway is stunning and it is a real treat to be able to clamber over the weird stones as the waves break around you. Next stop was the ruins of Dunluce Castle which dates back to the 14th century – precariously balanced on a cliff, looking as if at any minute it will be dashed onto the rocks below.

A fascinating part of the world that is well worth discovering.