I remember learning about Pompeii and the eruption of Mt. Vesuvius in school as a child. As someone who’s always had a fascination with history and ancient civilisations, I knew that one day I would find my way there.

My previous visit to Italy back in 2012 saw me walking the streets of Milan, Florence, Siena, Verona and Venice, but I didn’t make it any further south, much to my regret. So this year, when I decided to finally tick Rome off my bucket list, I just knew my chance to see Pompeii had come. I scheduled an extra day into my trip just so I could make the journey down to the ancient ruins.

There are many tours offering trips to Pompeii on a day trip from Rome, but it’s actually really simple (and much cheaper) to do it by yourself. 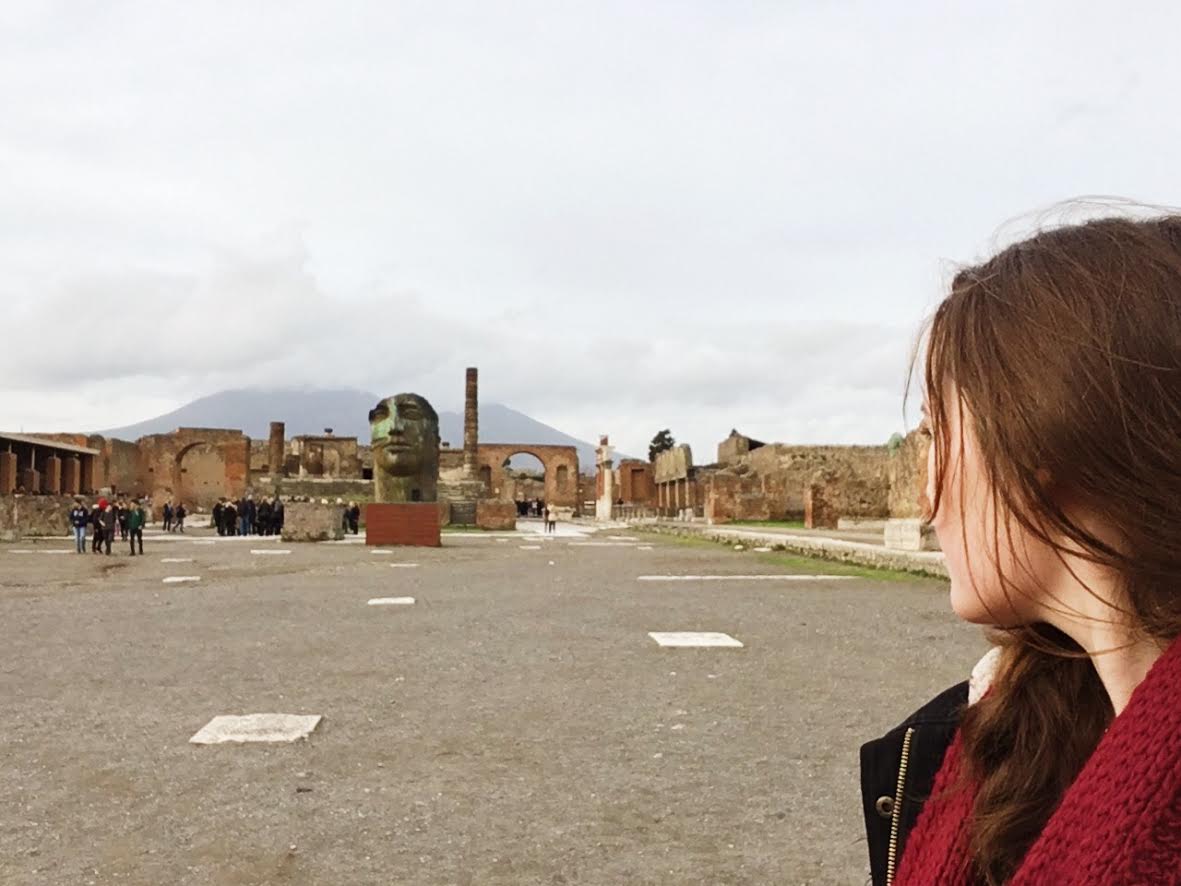 The three-hour train ride to Naples flies by surprisingly quickly. Rolling hills and green fields slowly give way to mountain tunnels. About an hour from Naples, I caught my first glimpse of the sea, the morning light sparkling on the blue waters of the Mediterranean. Once you get to Naples it’s a second, albeit much shorter, train ride out to Pompeii and Herculaneum. For a day trip you really need to choose one of the two ruined towns…it was an easy choice for me.

Arriving at the station at Pompeii, I could feel my excitement growing. It’s not often a childhood dream comes true. After several days of rain, the sun had decided to show its face, and I actually worried about getting sunburned (yes, in March. I’m Irish, it happens). Ticket bought, tour guides politely but firmly declined, I went through the turnstyle, entering the ruins. Oh. My. God. 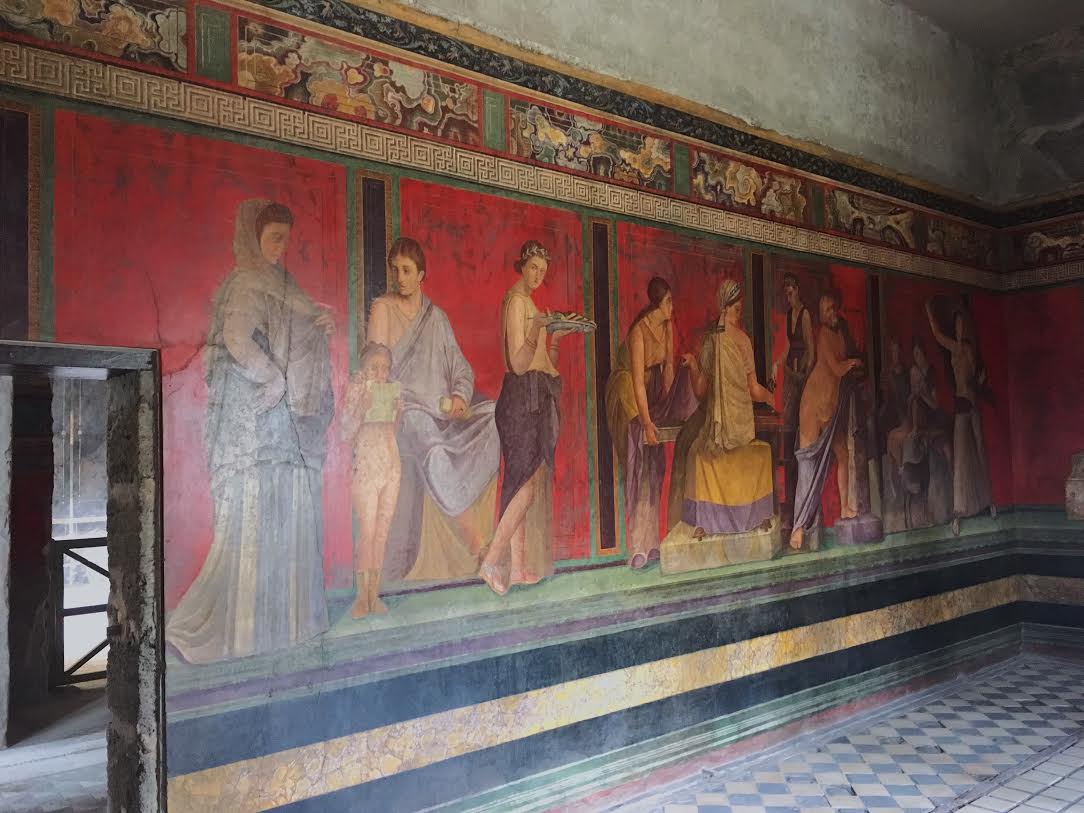 Pompeii is exactly how I imagined it would be. Uneven streets, those roofless houses, broken columns…it’s incredible to see the damage the volcano wrought, but also to see how much survived. Hundreds of storage jars, pots and coins sit on shelves in the granary alongside a few of those famous casts of the unfortunate inhabitants, including a dog, its limbs twisted in its final resting pose. It’s sobering and fascinating all at once.

This is more than a tourist site – it’s an entire city. This means kilometres of streets to wander, and very sore feet at the other end. The most well-known sections are labelled on a handy map, with a free booklet giving basic information on many of the houses and buildings you pass. There’s no way to see everything Pompeii has to divulge in one day, but it is possible to hit the main attractions if you ignore those aching legs. 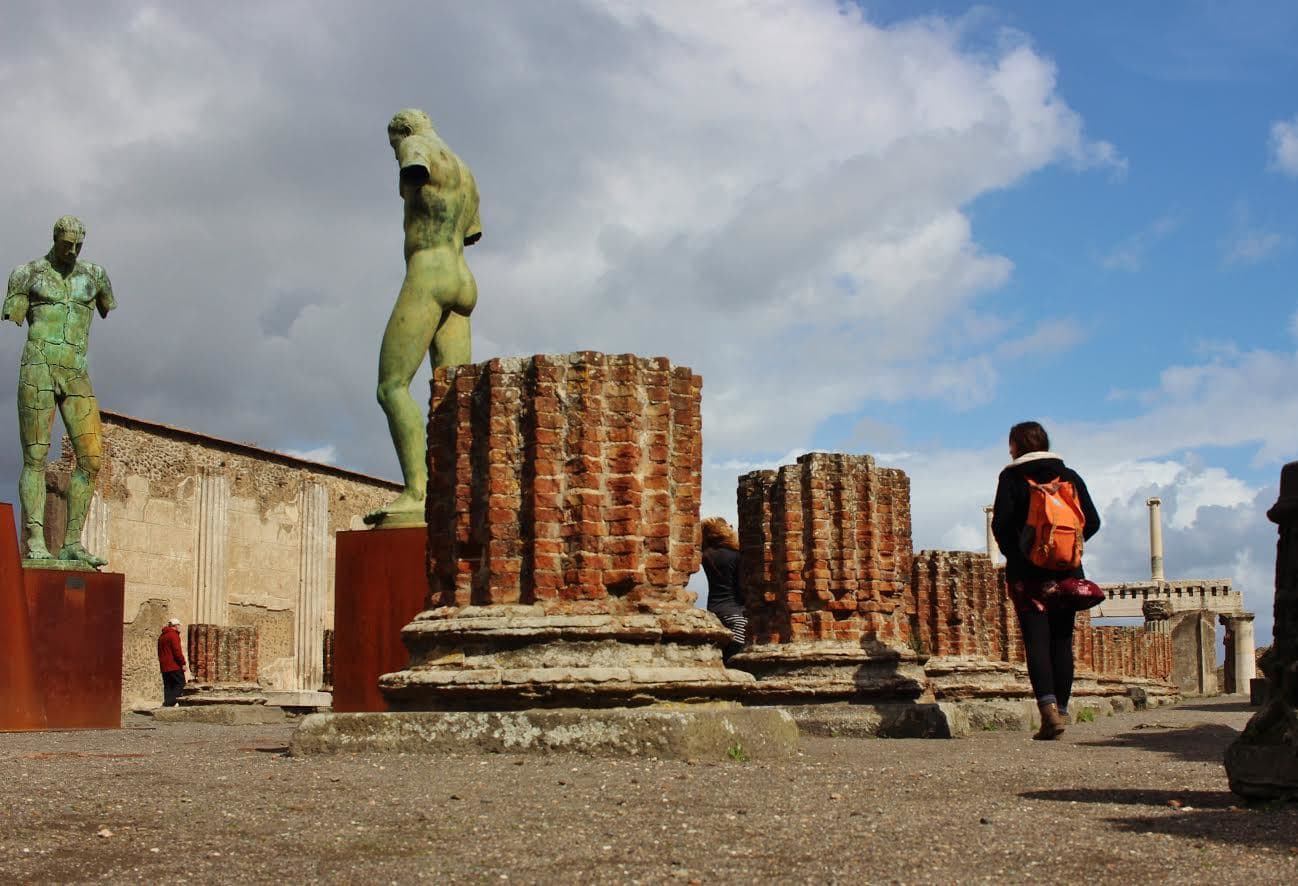 My favourite sites in Pompeii would have to be the amphitheatre, the House of Mysteries, House of the Faun and the Forum. Oh, and every floor mosaic in the city – seriously, those old Pompeiians knew their stuff when it came to floor decor. And if you’re in need of a good, childish giggle, head to the House of the Vettii and check out the painting of Priapus to the right of the door. The people of the Roman Empire were no prudes, that’s for sure.

Almost 2000 years have passed since Pompeii and nearby Herculaneum were destroyed, but Mt. Vesuvius is ever-present. Standing in the Forum, the still-active volcano is visible through the ruins. Though clouds obscured the summit on the day of my visit, it still loomed over the landscape, a character in its own right in the tragic story of Pompeii.

I think March was the perfect time to visit Pompeii. The summer heat can be extremely intense, but at this time of year the winter chill had started to recede and the sun shone bright. Though the more popular parts of the city seemed a little crowded at times – especially when a school group passed loudly through, there were other times when I felt completely alone. Step off the main streets and discover a maze of empty alleys with their mismatched cobble stones and strangely peaceful atmosphere. Just watch your footing!

While a day trip from Rome to Pompeii is a long journey, every minute on the train was worth the amazing experience of walking through history. I highly recommend it to anyone, whether you’re in Rome for a few days, or spending longer in Italy – one of my favourite countries.

How to Visit Pompeii on a Day Trip: 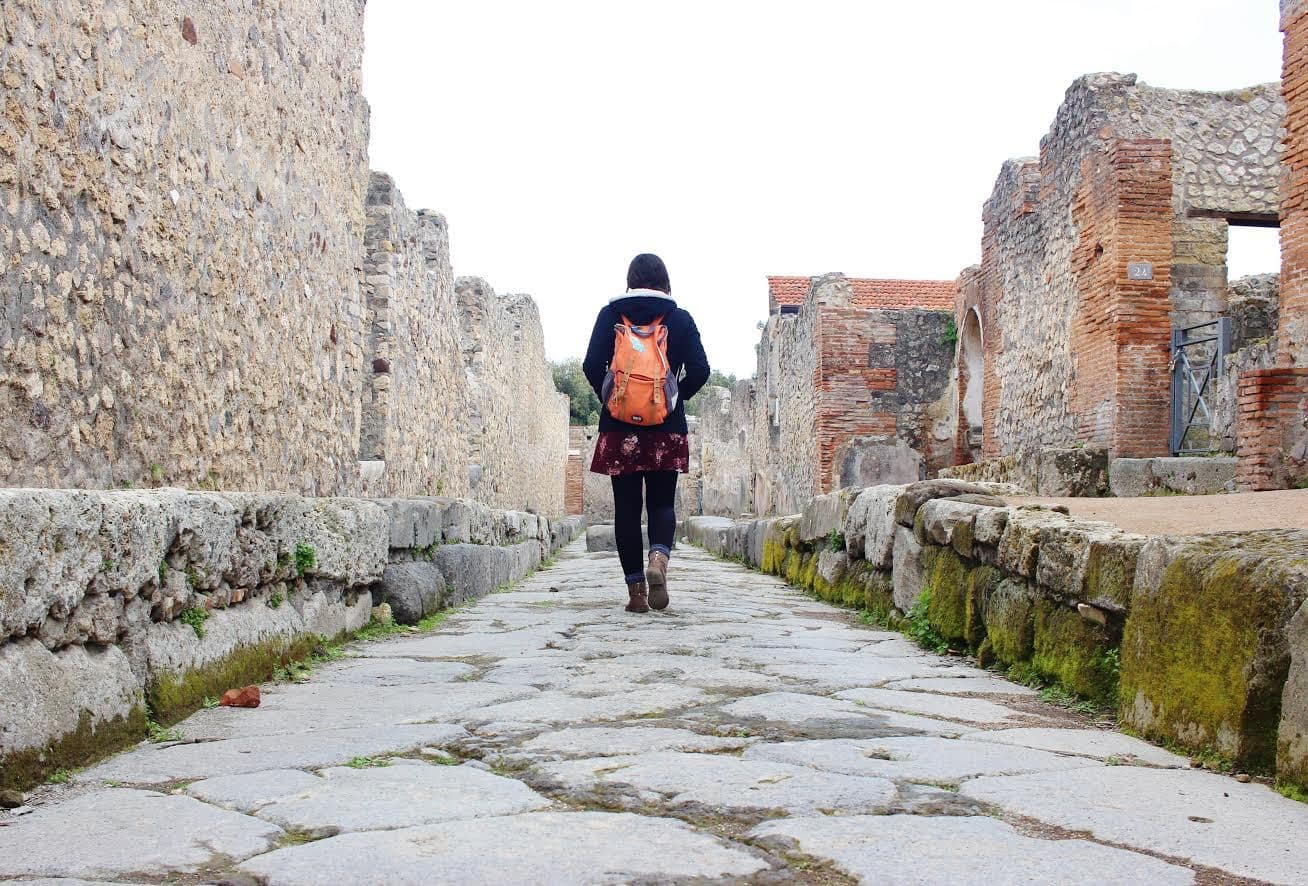 Have you ever been on a day trip from Rome to Pompeii? Did you enjoy it as much as I did? Or are you adding it to your bucket list right this second?

Creepy Paris: Exploring The Dark Side of the City of Light

Budapest’s Ruin Pubs in Photos – Drinking in the History

Dearbhaile is an Irish zoologist and lover of all things travel, wildlife and nature related. When she’s not working with wild animals or backpacking through far-flung countries, you’ll find her at home in Ireland, sharing her stories and saving for her next adventure.