We woke up in Budapest that morning with plans to go to Vienna, Austria next on our trip through Eastern Europe. However, while sipping our cups of tea – Lee casually turned to me and said, “Fancy going to Bratislava instead?” I said, “why the hell not?” so we took a detour to Slovakia. Because that’s just how we roll.

Bratislava is the capital city of Slovakia and the culture centre of this small Eastern European country. We had no idea of what to expect from this city but we were very pleasantly surprised by it. Bratislava has a gorgeous inner city with narrow cobblestone streets, historic churches and plenty of beautiful architecture to admire. 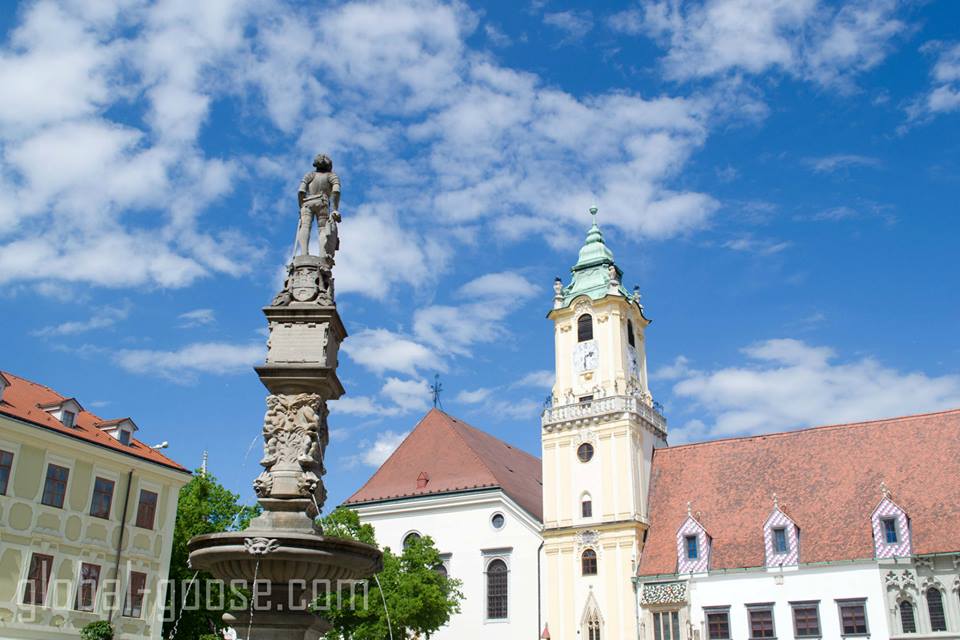 It also has very affordable prices (especially compared to Vienna!), a great night life and it is just the right size – small enough to walk everywhere but large enough to have plenty of things to do. We ended up staying for a week, getting lots of work done, taking in a walking tour and a pub crawl and having a great time. Oh yeah, and we also got chased by a mob of grunting and moaning zombies – but more on that later. 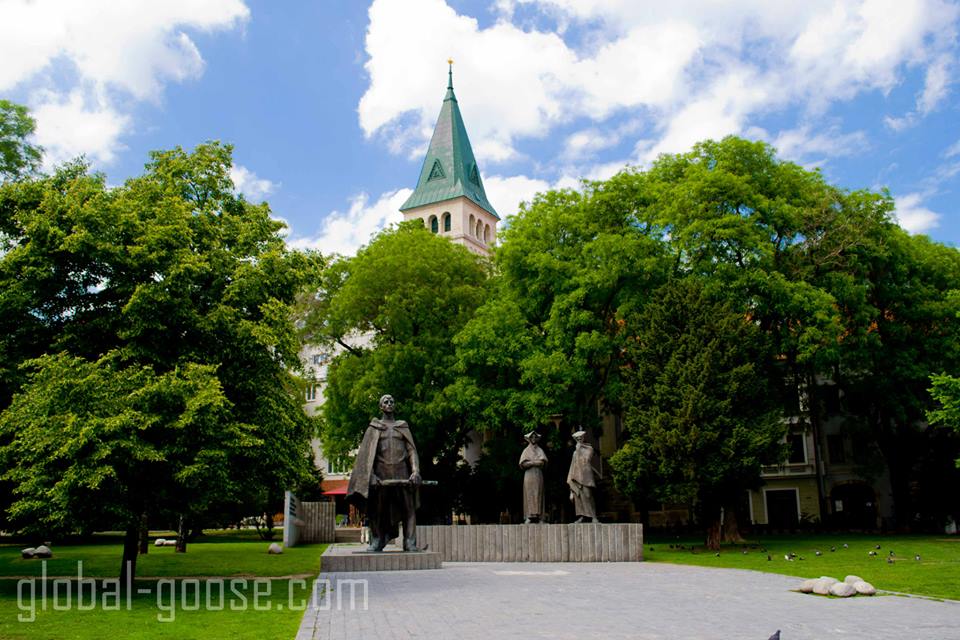 One of the really nice things about Bratislava is the abundance of lovely green spaces and public areas where you can sit and relax. There are many parks as well as cafes and restaurants with outdoor seating sections where you can enjoy the sunshine. There is plenty of public art and sculptures as well, which really add to the atmosphere of the city.

We took the Bratislava Free City Walking Tour by Be Free Tours. The tour is offered at 11am and 3pm daily and takes around 2 hours and 15 minutes. The tour itself is free, but if you enjoyed it feel free to give your tour guide a tip – ours was wonderful, friendly and very informative. We learned a lot about the interesting history of this city, which really helps you to appreciate it even more.

We also went on the pub crawl, offered by the same tour company, in order to meet some other travellers and see some of the night life of Bratislava. If you don’t know anyone in a city while travelling, going on a pub crawl can be a fun way to be teamed up with a bunch of other fun backpackers and make friends.

Aside from the pub crawl and the walking tour, we didn’t do too many activities during our time in Bratislava. Instead, we just took the time to wander the streets and soak in the beauty of this city. There is lovely architecture around every turn, so you will want to bring your camera with you every time you step out the door. 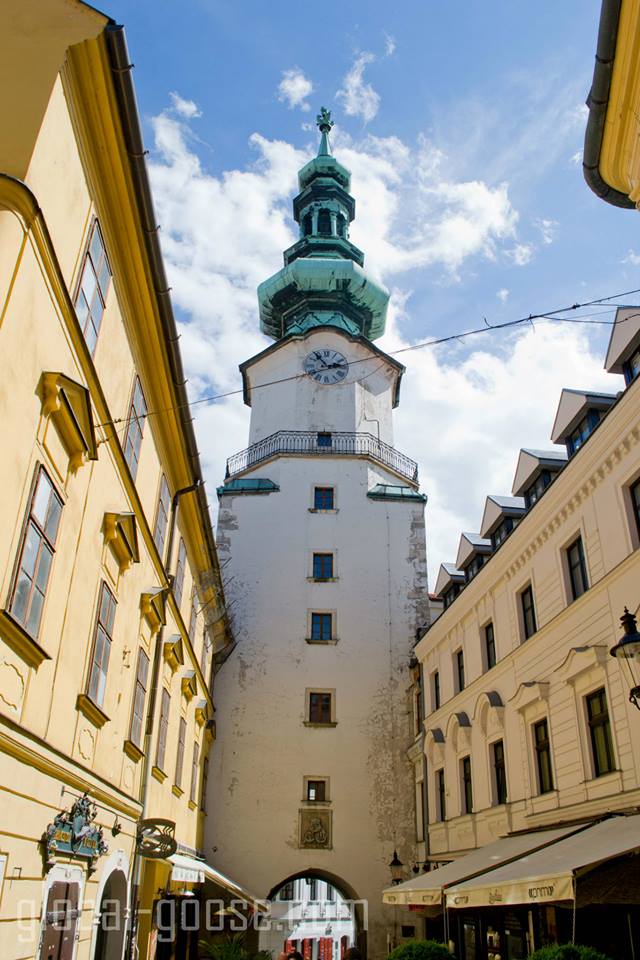 Lee and I love to simply wander through cities in random directions, talking about everything and anything (like Jesse and Celine in Before Sunrise). Bratislava is a wonderful city to do that in, with such welcoming Eastern European charm and cosy streets. 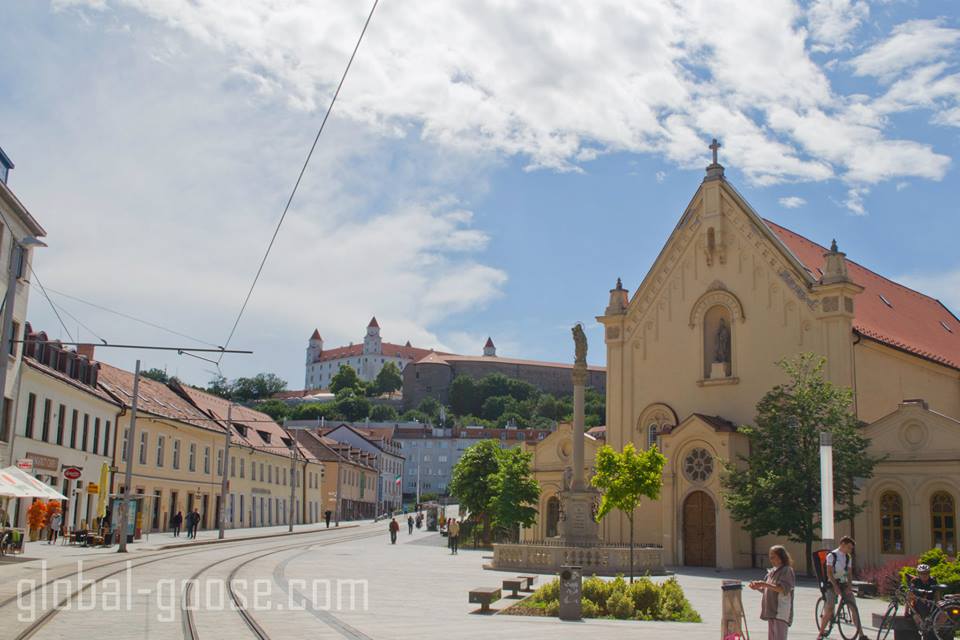 Yes, it’s all very lovely – until you get attacked by a horde of stumbling, groaning zombies that are hungry for brains.

During one of our random wanders through the city, we suddenly found ourselves right in the middle of the Bratislava Zombie Walk! I’m not sure if it is a fundraiser or if it’s just for fun, but everyone was really into it and some of the costumes were amazing. 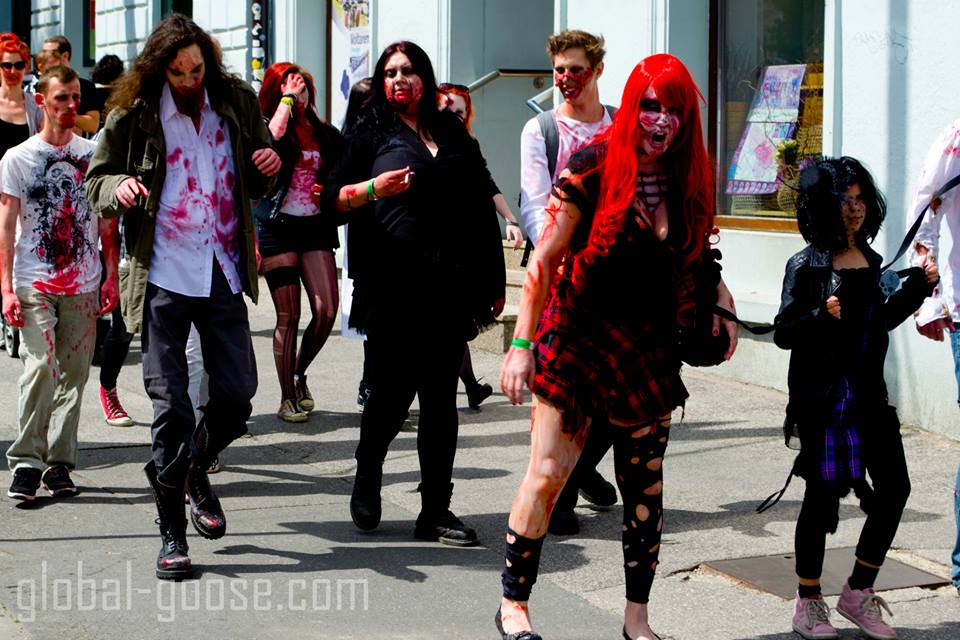 There was a parade of over 100 people, zombies of all shapes and sizes and varying stages of decay. It was a gory, disgusting and amazing spectacle that left us in awe and amusement. Oh the things that you see when you randomly wander through a city… 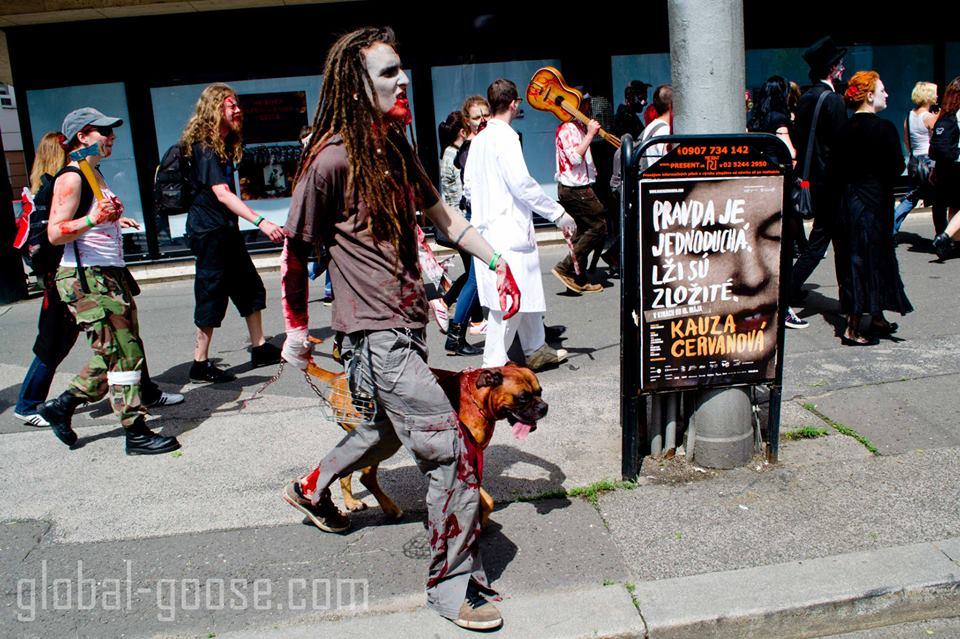 If you are travelling in Europe and you have the time, we would highly recommend visiting Bratislava. It’s beautiful, affordable and there is so much to do here. Just watch out for the undead…