It’s a sound I recognized immediately from horror films, the high pitched squealing and frantic flapping of dozens of bats as they swarm around the bright entrance of a dark cave. As I looked up to see them circling high above me near the roof of the limestone cavern, I clutched my flashlight a little tighter and I stepped further into the darkness.

Lee and I were on a guided tour of the Dark Caves, a protected ecological site which is part of the Batu Caves, located just outside of Kuala Lumpur. If you can pull yourself away from the spicy scent of cheap street food and abundance of shopping in the capital, this spot makes for a perfect afternoon trip.

Batu Caves is divided into two sections, the Cathedral Cave which has several Hindu shrines and is free and the Dark Cave which is only accessible with a guide. The 45 minute guided tour of the caves cost 35RM ($11.50) and was worth it just for the experience of being in the caves, not to mention the interesting info that we learned. It was bizarre how warm it still was so deep in the ground and how you could be sweating in the humid dark, surrounded by rocks and the echoing sound of dripping water. 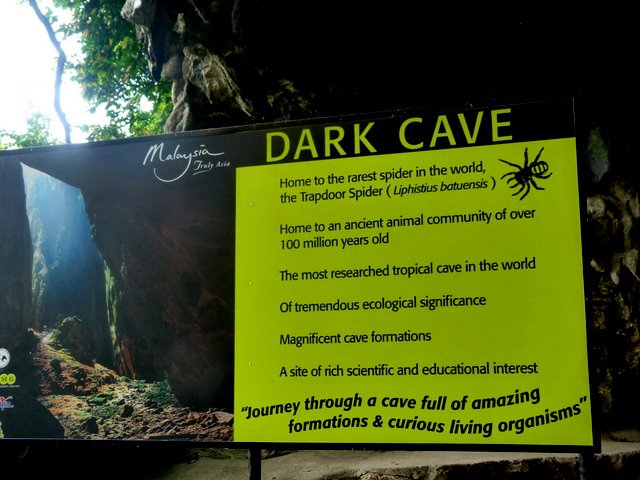 Drip. Drip. The water slowly leaked down the spines of the stalactites onto the floor of the cave, where it had built up in bulbous chalky-white formations. One stalactite had met in the middle with it’s cave-floor twin to form a huge column of limestone. I asked the guide how long that must have taken and he told me that one inch of the column represented approximately 100 years. This sent goosebumps down the back of my neck as I peered up at the column as thick as a tree trunk and as tall as a house. This beautiful formation drips onto itself quietly in a cave for millions of years. In the lifespan of this column, civilizations have fallen, species have gone extinct, wars have been waged and countries have been built. 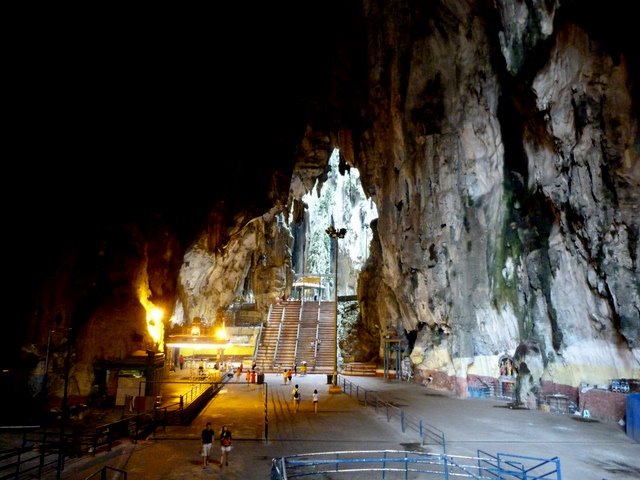 Our guide was very knowledgeable. He explained how bats, spiders, snakes, cockroaches and other creatures interacted in the surprisingly complex cave ecosystem. At one point during the tour he encouraged us to turn off our flashlights. This was so we could experience the absolute impermeable darkness of the deep cave. It was actually quite scary! It made me realize how helpless humans are when we are outside of our environment.

When we are above ground we are the dominant species, doing whatever we want.But down in this subterranean blackness, only a burnt out flashlight battery could stand between us and our ability to function.You can see absolutely nothing and there is NO light for your eyes to adjust to. If you got lost deep in these caves you would have no hope but to blindly feel your way out one step at a time.

This thought made me a bit nervous, so whenever the group left me behind as I was taking a photo I hurried to catch up in fear of getting swallowed up by the blackness.

The Batu Caves are only a short bus ride or train journey from Kuala Lumpur. You’ll know you’re there when you see the towering golden Lord Murugan Statue looming over you.

There is an intimidating staircase leading up to the Batu Caves. However, we were so distracted taking photos of monkeys that we made it to the top before we even realized it.

Yes, Monkeys. There is a group of them which seem to always hang out on the steps. So, if you are carrying any food watch out or they might be inclined to snatch it from you. We spent a lot of time with the monkeys, watching them interact with each other and tourists.

They each have their own personalities and they seem to love the attention they receive from tourists. One big old man looking monkey had tipped over a can of orange Fanta onto the steps. He was shuffling along with his butt in the air, licking it up like a vacuum cleaner.

Some of the smaller ones were clinging to the lamp posts and shaking them so they made a clanging noise. Lee must have gotten too close to a mother monkey and her baby. She warned him off by baring her teeth and hissing at him.

As we walked up the stairs to the Batu Caves Lee turned around with a bewildered expression on his face. “What the…” he mumbled and I turned around as well to see what he was looking at.

It was this lovely chesty bovine right here. Is she sexy or what? I tried to figure out the religious significance behind this statue. However, Googling “Hindu cow goddess with boobs” has gotten very strange results that are not what I am looking for. I know cows are sacred in Hindu mythology. However, if she already has udders why does she need boobs as well? 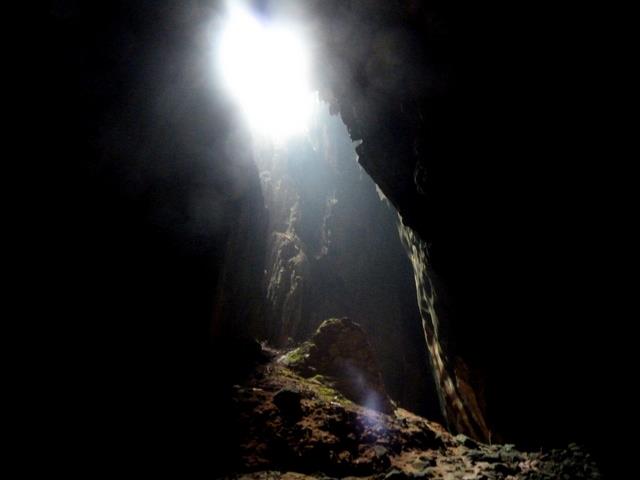 The other section of the Batu Caves contains several more of these colorful Hindu sculptures and shrines. They are even more surreal within limestone caverns with brightly colored lights and sitar music echoing all around. There is even a shop within the temple caves. There, you can buy all sorts of singing and dancing religious icons and figurines.

The Batu Caves are a very rewarding experience. You get to experience the sensation of being in the creepy dark caves and see a fascinating religious site. Plus, you also get to hang out with monkeys as well. As we have learned in our travels so far in Southeast Asia, any attraction is better with monkeys.