Looking for a quick guide to Bangkok featuring some of the top attractions to help you plan your visit? Read on.

Bustling capital city Bangkok began as a small trading post at the mouth of the Chao Phraya River during the Ayutthaya Kingdom. It is now the economic and administrative centre of the Kingdom of Thailand. Its name means “City of Angels” and it echoes some of the glamorous hedonism and excess of the American “City of Angels”, Los Angeles.

Bangkok offers glitzy shopping malls and open-air markets, smutty red light districts and holy temples, hectic traffic jams and barges floating peacefully down canals. Once you overcome the dazzling strangeness of Bangkok, you will become addicted to the way this city seems to force you to live in the moment.

Bangkok is also becoming a popular location for Digital Nomads, a brand of entrepreneurs and freelancers who use the internet, social media, and technology to work remotely from anywhere in the world. These champions of the unconventional lifestyle are attracted to the cheap rent and cost of living and convenient position of Bangkok in the centre of the Asia Pacific region.

There’s so much to see and do in this city that you could spend months here and barely scratch the surface.

Climate: Tropical Wet and Dry – One of the hottest cities in the world, the temperature stays in the 20s and 30s (degrees Celsius) all throughout the year. The hottest recorded temperature was 40.8 degrees.
Population: 9,100,000
Currency: Thai Baht
Language: Thai

A Quick Guide to Bangkok: Top Things to Do

Wat Pho – The Temple of the Reclining Buddha

Wat Pho is the oldest and largest Buddhist temple in Bangkok and home to the famous large reclining Buddha statue. This glowing gold plated landmark is 46 metres long and 15 metres high and is decorated with mother-of-pearl inlay on his eyes and the soles of his feet.

The site of Wat Pho was established as a centre of education for traditional Thai medicine and was the birthplace of traditional Thai massage. The complex is divided into two different walled compounds. The northern compound is where you can find the massive reclining Buddha and the massage school, and the southern walled compound contains a working Buddhist monastery with monks in residence and a school. You can get a massage at the temple or even sign up for courses to learn Thai massage yourself!

A fascinating peek into Buddhist religion and culture, and an impressively beautiful example of large scale sculpture, Wat Pho is a must see landmark.

The gorgeous performers of the Ladyboy cabarets in Bangkok have long, sexy legs, flawless complexions and killer cheekbones. They are always dressed to kill. The only thing is; they weren’t born as women! They are known as ‘Katoeys’ or ‘Ladyboys’ and are mostly accepted and even embraced in the very tolerant society of Thailand. Some even believe that ladyboys bring them good luck. Certainly, Thailand is one of the best places in the world to be transgender, as gender reassignment surgery is done to incredibly high standards and is relatively cost-effective.

The Ladyboy shows of Bangkok showcase these performers in a glamorous and spectacular high-energy setting. These cabaret-style shows feature everything from disco dance numbers to impressions of popular celebrities as well as traditional portrayals of mythical creates and legends of the Orient. Lavish costumes, elaborate dance choreography, and over the top songs create the ultimate party atmosphere. The ladyboys are flawless and highly skilled performers. They never fail to get a laugh and to engage the attention of the audience.

If you have never seen a cabaret show, treat yourself to a night out of entertainment you will never forget! 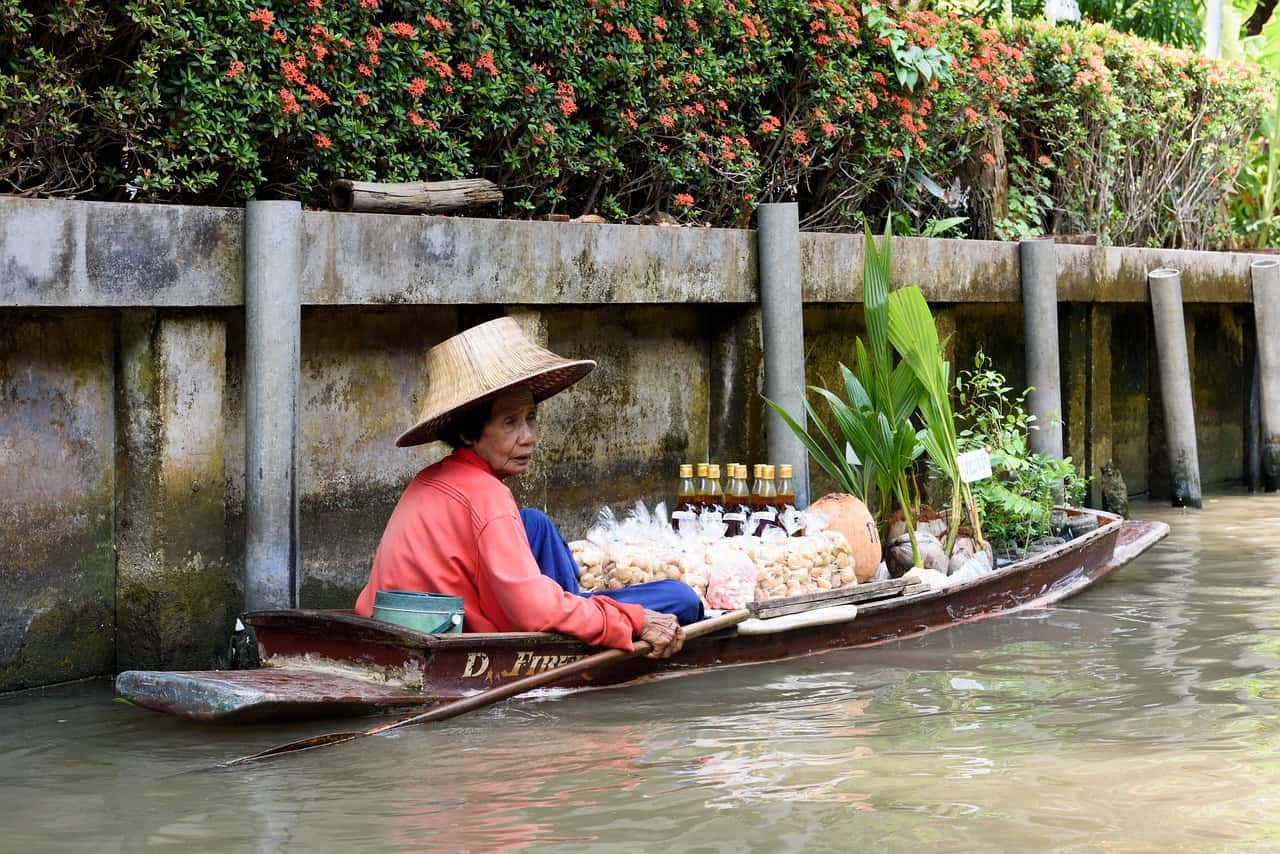 Bangkok is referred to as the ‘Venice of the East’ thanks to its maze of inland waterways. These canals and rivers used to be the main thoroughfares of the city and are still important to life in Bangkok. The ‘Talaat Naam’ or Floating Markets are where sellers gather to peddle their wares from small boats. While exploring these marketplaces, you are sure to see lots of beautiful local handicrafts for sale.

Damnoen Saduck Floating Market is the largest of these types of markets and one of the more famous. If you want to really see it at its best, get there as early in the morning. As a result, you’ll get to see the market while it is still waking up and the crowds of tourists have not yet arrived. Visiting earlier in the morning will also help you avoid the heat later in the day. Lose yourself in the chatter and commotion of the lively marketplace atmosphere, check out all of the interesting things for sale. Don’t be afraid to haggle for a better price!

No quick guide to Bangkok would be complete without a mention of Khao San Road. The name of this street translates as “milled rice.” This is because it was once the main rice market of the city. Now, this neighbourhood has become paradise for the young budget backpacker looking for a cheap place to stay. It is also one of the cheapest and most diverse places to eat in all of Bangkok, with ethnic food from many countries such as India, Italy and more. Meanwhile, street carts on the road sell mouth-watering dishes such as pad thai, falafel, and hummus.

Khao San Road is known as the centre of art, dancing and partying. During Thai New Year there is a huge water fight known as Songkran in the middle of the street. Good times. 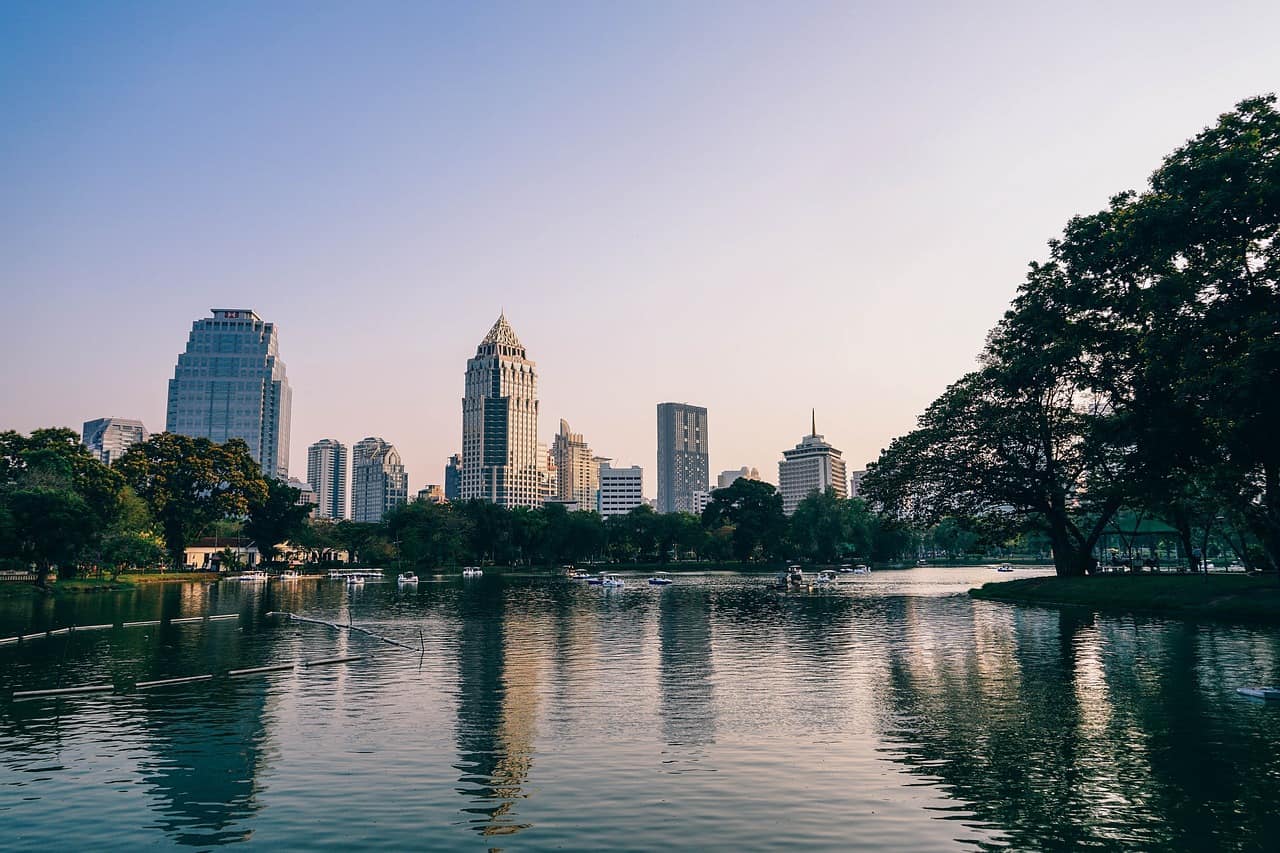 Take a moment to relax in Lumphini Park. Open public green space is rare in Bangkok. This oasis offers a welcome respite from the action of the city. Stroll along the 2.5 km of paths, or rent a boat on the artificial lake. In the early mornings you will see groups of people practicing the ancient art of Thai-Chi.

Lumphini Park was created in the 1920s on royal property by King Rama VI. You can see his likeness in a statue at the south-western end of the park. The park contains the first public library and dance hall in the city. The Winter Concert in the Park Festival is held here. 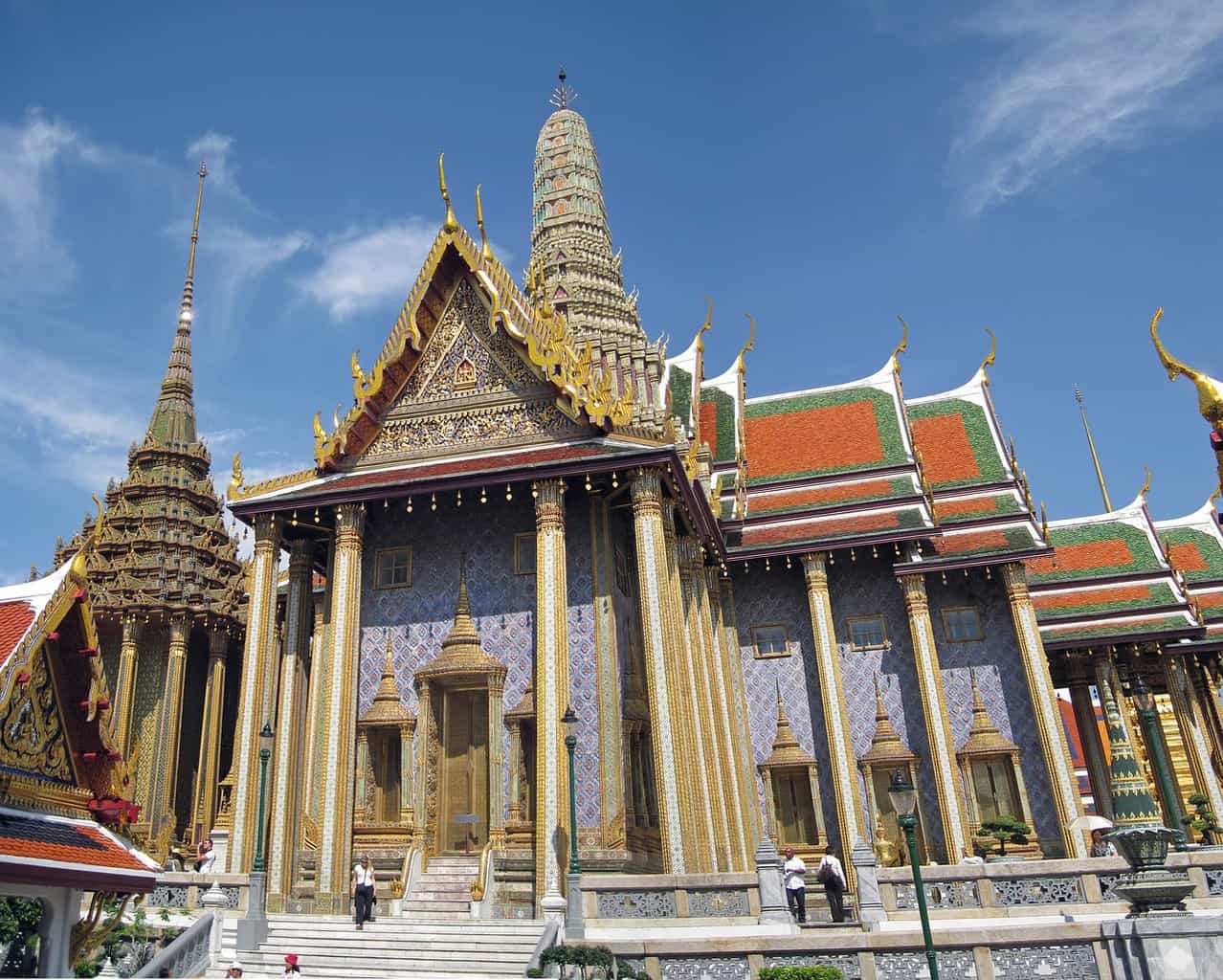 Built in 1782, The Grand Palace was the official residence of the Kings of Thailand from the 18th century. This is one of Bangkok’s most famous landmarks and most photographed sites. The intricate and elaborate facades are visually spectacular. In the Wat Phra Kaew building the Emerald Buddha sits serenely, made of green jadeite and clothed in gold.

You must follow the strict religious dress code, which includes long pants, shirts with sleeves, and no bare feet. If you don’t, you won’t be allowed in. You can acquire clothes to cover up with at a booth near the entrance for a deposit.

We think Bangkok is one of the coolest cities in the world. Why not have your own adventure there and see for yourself? Please share your Bangkok tips in the comments below.

P.S. Check out my list of 14 Things I Love About Bangkok.