Kelly and Lee are a digital nomad couple who are on not just a Gap Year, but a Gap Decade. They have teamed up to create an unconventional life together with a career that they can take on the road and only the possessions that they can fit in their backpacks. They have no house, no car and no fixed schedule and they love the thrill of exploring somewhere new.

Global Goose offers an insight into the lifestyle of full time travel as well as destination guides, practical tips and interviews with inspiring travelers.

I have been travelling the world full time for the last five years, working from my laptop. Ask Me Anything! on Reddit

Valentine’s Day Q+A: Expert Tips for Traveling as a Couple on Downtown Traveler

A House Made of Air – Pablo Neruda’s Retreat in Valparaiso, Chile – Flightnetwork.com

The Art of Brunch in Melbourne – Flightnetwork.com

What Does the Name Global Goose Mean?

We were inspired by the goose because it is a migratory bird, often seen flying on when the seasons change in search of a better habitat and more abundant resources.

As travelers we migrate this way as well, following our interests and our curiosity wherever they take us.

Geese are also among the species of bird that fly in a V-formation. This very clever trick allows the front goose to take the majority of the wind resistance, making it easier for the geese behind it to fly. During the migration, the geese rotate so they each take a turn being the leader.

We hope for a parallel of this idea within the travel community. More experienced travelers can share their knowledge with first-timers, making their journey easier and less scary.

Wild geese are strong and tough animals on their own, but when they are united they can rely on each other and fly farther than they ever could alone. We travelers are birds of a feather, so we should flock together.

The Story of How Kelly and Lee Met

Kelly and Lee met in a haunted prison on the top of a hill overlooking the ocean on the North Island of New Zealand. With this sort of first introduction, it’s no surprise that their relationship has been anything but ordinary.

Although they like to say that they met in prison for the shock factor, The jail was actually Napier Prison, a historical site where they were both working for accommodation while backpacking. Within these creepy old metal cells, they discovered a connection and a shared desire to explore the world.

After a few months of living and traveling together in New Zealand, Lee had to go back to England. Neither of them had discussed whether their travel romance could turn into a long term thing, but they both knew that we were on to something good. When Lee suggested that Kelly come back to the UK with him she said, “why the hell not?” 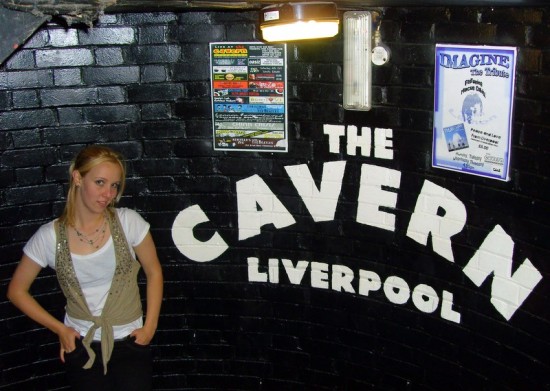 That’s how she wound up spending 14 months in Lee’s hometown of Accrington, Lancashire. She learned a lot about football, ate way too many meat and potato pies, drank plenty of pints of lager at the local pub and became part of a community that feels like a second home.

During their time in England, they traveled a bit around the UK and to Rome, Italy, but mostly got down to working hard and saving their money. Lee and Kelly used this time to create Global Goose and establish a freelance writing career that they could take on the road with them.

Once they had quit their day jobs they were free to live and work from anywhere.

They spent three weeks in the Algarve region of Portugal testing their digital nomad lifestyle before setting off to explore Kelly’s home country of Canada.

After a brief visit with Kelly’s folks, they set their sights on making it across the entire width of the second largest country in the world. Three months, ten provinces, dozens of trains and buses and several hundred Tim Horton’s later, they found themselves spending the winter in Newfoundland.

Four months later they stood on the side of the road in St. John’s with their thumbs out and hitched rides all the way across Newfoundland, stopping in tiny fishing villages and staying in lovely bed and breakfasts where they were treated to homemade sticky buns by incredibly friendly women with almost incomprehensible accents.

Then they migrated south and crossed the border into the USA, fulfilling a longtime travel dream of visiting New York City. After taking a very small 36 hour bite out of the Big Apple, leaving them wanting to come back for more, they headed down to Virginia where they lived with Lee’s brother, his wife and their baby girl for three months.

In between babysitting, hiking and socializing they got a chance to spend a week in New Orleans where they gorged on the glorious food and soaked up the jazzy atmosphere of the French Quarter.

In June of 2012 they spent a weekend exploring Washington, DC before jetting halfway around the world to the Southeast Asian backpacker mecca of Bangkok to begin their travels through Southeast Asia.

Thrilled with the excitement of being in a totally new environment, they fell in love with cheap street food stalls, foot massages, fresh pineapple slices and the exhilarating chaos of simply walking down the street.

From the big city they headed next to the islands, enjoying the quiet and solitude of Koh Lanta and the youthful nightlife vibe of Koh Phi Phi.

Their month in Thailand went by in a flash and they were soon on a flight to Kuala Lumpur, Malaysia.

The travelling digital nomad lifestyle had become more than just a dream – it was a real and sustainable way to work while on the move.

They didn’t stop there.

At the moment they are slowly travelling around Asia, working on their business and seeing as much of this big beautiful world as possible.

After spending most of their 20s travelling, they have learned a lot from being on the road. It’s clear that travel will always be a part of their lives and that their travel style will grow and change as they do.

They hope that Global Goose can be a source of inspiration and helpful information for any other travelers who share their dream of seeing the world.