Going out for a beer in Hanoi or Saigon is an experience unlike no other. First, you have to gather your nerves and walk confidently through the never ending heavy stream of motorbikes flowing through the crowded streets. (Don’t worry, if you move with purpose they will flow around you like a river rushing past a rock.) Then, you must find your way through the packed streets and narrow alley ways until you spot them – groups of people huddled together sipping beer while seated on little plastic chairs that are not too different than the ones you had at your 5th birthday party.

These sidewalk and street corner drinking establishments are a huge part of the Vietnamese drinking culture. They are a popular spot for the locals to sit and relax after a hard day at work and chat over a cold beer and a bowl of roasted peanuts, as well as a meeting point for gregarious backpackers to get to know each other and swap travel stories.

Another major draw to these places  is the ridiculously cheap beer. In Hanoi, these small local watering holes offer what is called “Bia Hoi” (meaning “Fresh Beer”) which is a small batch of homemade beer that is brewed fresh every day. It’s quite light and refreshing, so it is perfect on a hot and steamy day in Saigon or Hanoi. It is delivered every day and sold for around 25 cents per glass.  Where else could you go on a night out and get drunk on less than most people find when cleaning out the change underneath their couch cushions? Even if there is no fresh beer available, a bottle of Saigon Red or Green would not set you back more than a couple dollars. 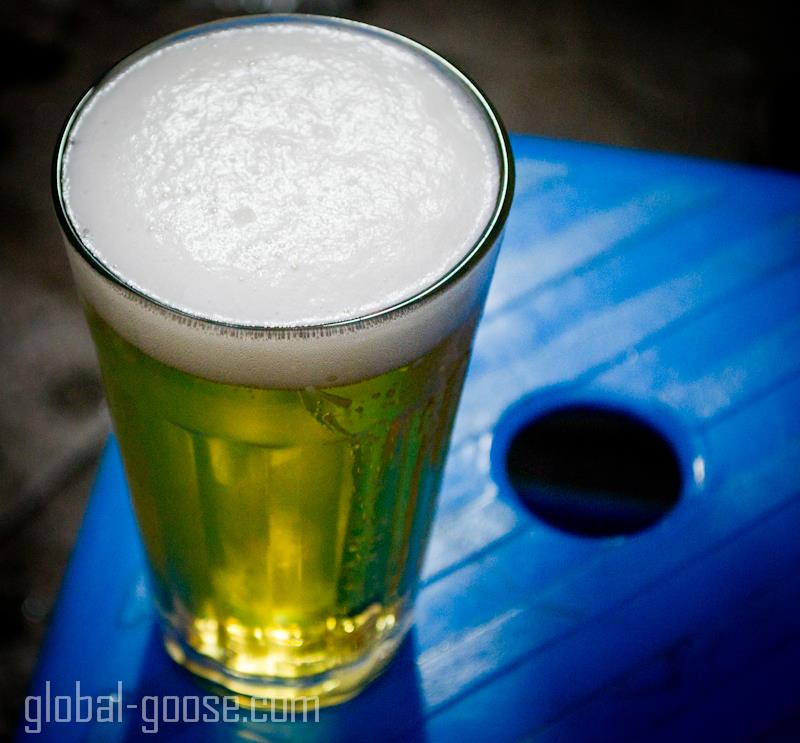 What Lee and I loved most about drinking in Vietnam was how much the atmosphere of these street side beer tables promoted conversation and interaction. They were the exact opposite of a posh bar where you pay $10 for a cocktail and sit in your shiny booth bored because it is too awkward to chat to someone. Instead, you are sitting on a sticky plastic table on a dirty street and you don’t care because you are chatting to anyone and everyone around you. The tables are so close together that it is almost impossible not to naturally join into your neighbour’s conversation. Lee and I quickly learned that we couldn’t go for “just one beer” at one of these places, as we would inevitably end up chatting to a fascinating stranger for hours and sharing stories until 3am.

An odd moment happened one night when we were asked to stand up and had our tables and chairs exchanged for identical ones. We were bewildered by this seemingly pointless action and couldn’t figure out what had happened until later. It’s hard to tell where one bar stops and the other begins and the owner was swapping our chairs with ones belonging to the neighboring bar so that we could carry on drinking while she shut down for the night.

It’s a chaotic, energetic and wonderfully social atmosphere and one of my favourite experiences in Vietnam.

Want to get a feel for the atmosphere? Check out this video:

Have you ever drank Bia Hoi on the street in Vietnam? Share your experiences in the comments below.