When I think back on our visit to Valparaiso, Chile I won’t just remember the sights and sounds that I encountered there – such as the brightly coloured murals splashed on every building, the music in the streets or the old-fashioned funiculars as they slowly clatter up the steep hills overlooking the ocean.

I will also remember the tastes.

Biting into an empanada de pino, hot from the oven and releasing meaty steam from its insides when the soft crust is broken. Eating machas a la parmesana and sucking the juicy wine-soaked clam covered in baked cheese from its shell. Savouring the fresh and acidic lightness of pebre, a condiment made with finely chopped tomatoes, onion, coriander, olive oil, peppers and garlic, on a piece of warm, crusty bread. Slurping down the warm spicy and salty broth of paila marina, a warm and comforting seafood soup. It is these lovely flavours that will flood my mind when I remember Valparaiso.

During our time in Valparaiso, we had the pleasure of meeting Melissa from Tasty Tour Chile, who is truly passionate about her local cuisine. Melissa’s vision for Tasty Tour Chile is to teach about Chilean culture through food, wine and beer – with the idea that by cooking the regional dishes visitors will understand this country a little bit more.

Chilean cuisine has its roots in traditional Spanish cuisine, local native cuisine and other European influences such as Italy, Germany and France – but over the years as Chile has formed its own identity the food has become a strong part of that identity, leading to Chile-specific dishes made from local ingredients.

Learning about Chile through your stomach is not only a memorable and profound way to experience the local culture, it’s also probably the most enjoyable. Melissa’s classes are only supposed to be a couple of hours long, but they often run overtime – due to everyone getting caught up in the pleasure of cooking, nibbling, sipping, laughing and chatting.

An Afternoon of Seafood

My first cooking experience was an afternoon seafood class. (Which Lee didn’t attend because he is notoriously averse to eating anything that swims.) The class was attended by a large group of American University Students who were studying abroad. The large group made for a fun and lively atmosphere and soon everyone was busy mixing, chopping and stirring. 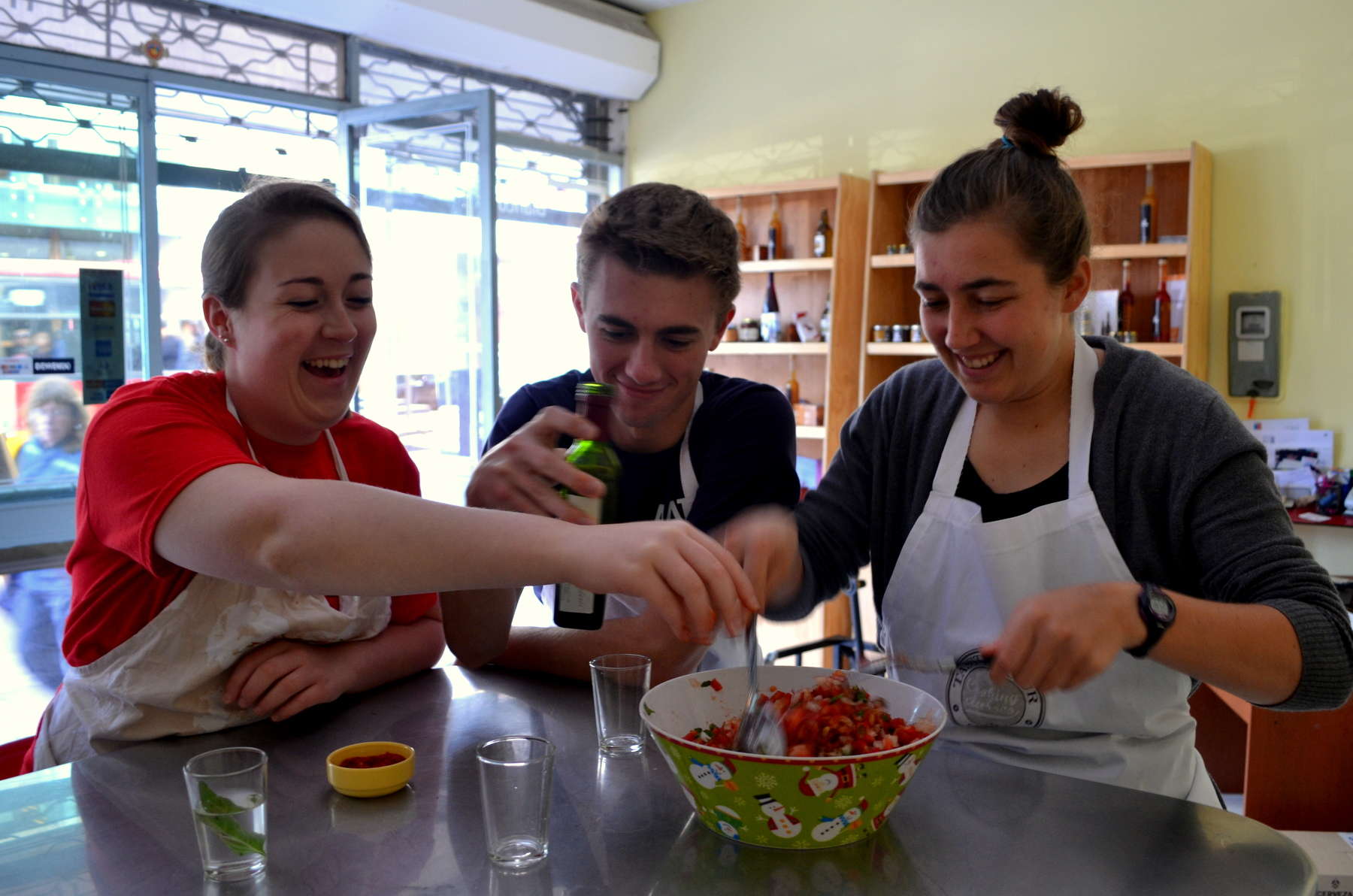 I often avoid cooking and stick to ready-meals, seeing it as a bit of a lonely and boring chore that takes too much of my patience when I am hungry. However, when done as part of a vibrant and talkative group – cooking can be a social activity and is a lot of fun.

We made machas a la parmesana, pebre and paila marina that afternoon, an absolute seafood feast. Everyone helped with each step of the process, from removing the clams from their shells to slicing the tomatoes to adding the seasonings – all guided by Melissa’s instructions. 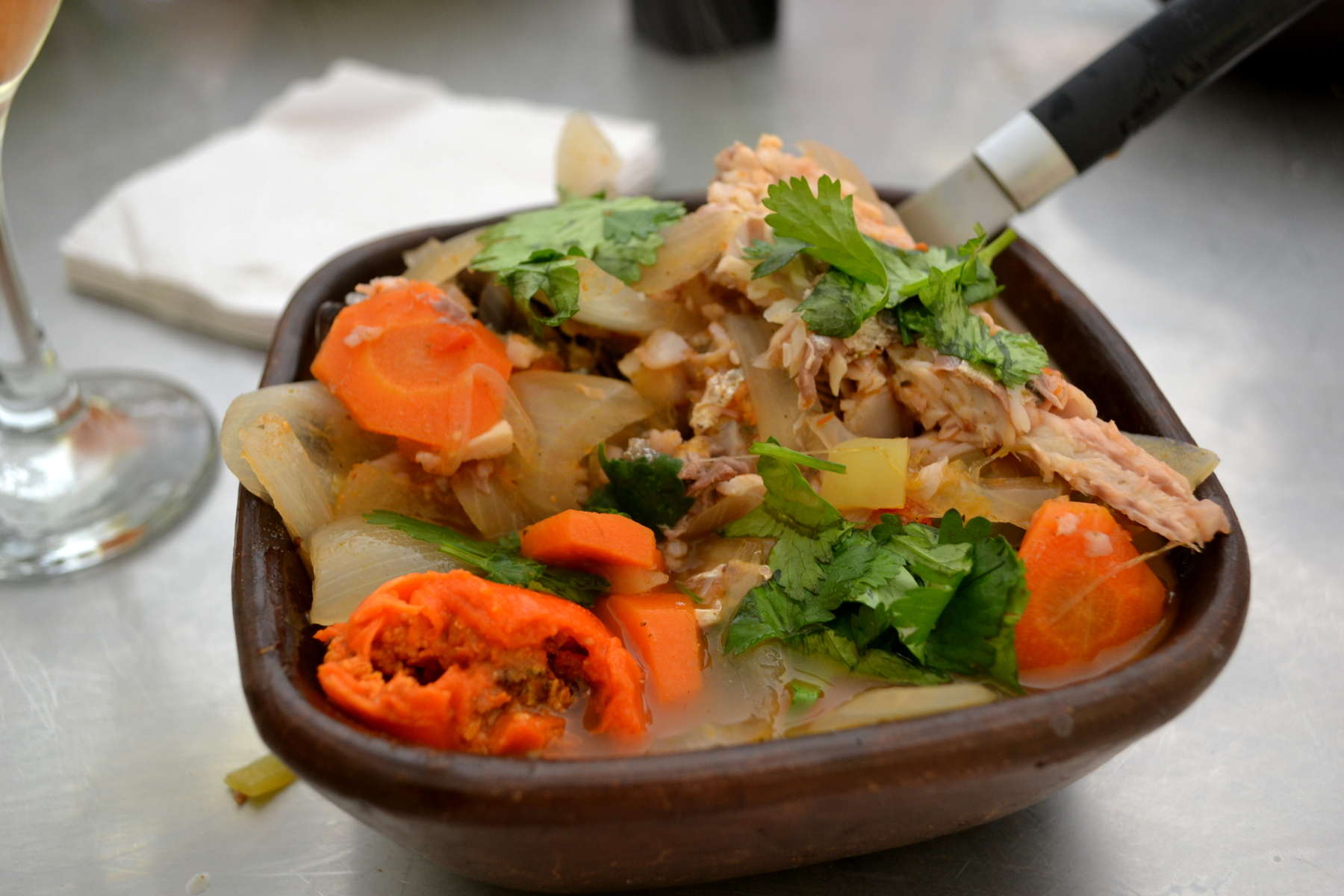 When it was done, we were rewarded by an enormous steaming bowl of delicious fruits of the sea. If you partake in this cooking lesson, allow yourself the chance to go back to your hotel and take an afternoon siesta – after stuffing your face with so much seafood you will want to slip into a blissful food coma.

An Evening of Empanadas

That same evening, we headed back to the Tasty Tour kitchen to learn how to make empanadas. Lee was understandably excited about this, as a Northern Englishman he is naturally attracted to any version of meat within pastry. 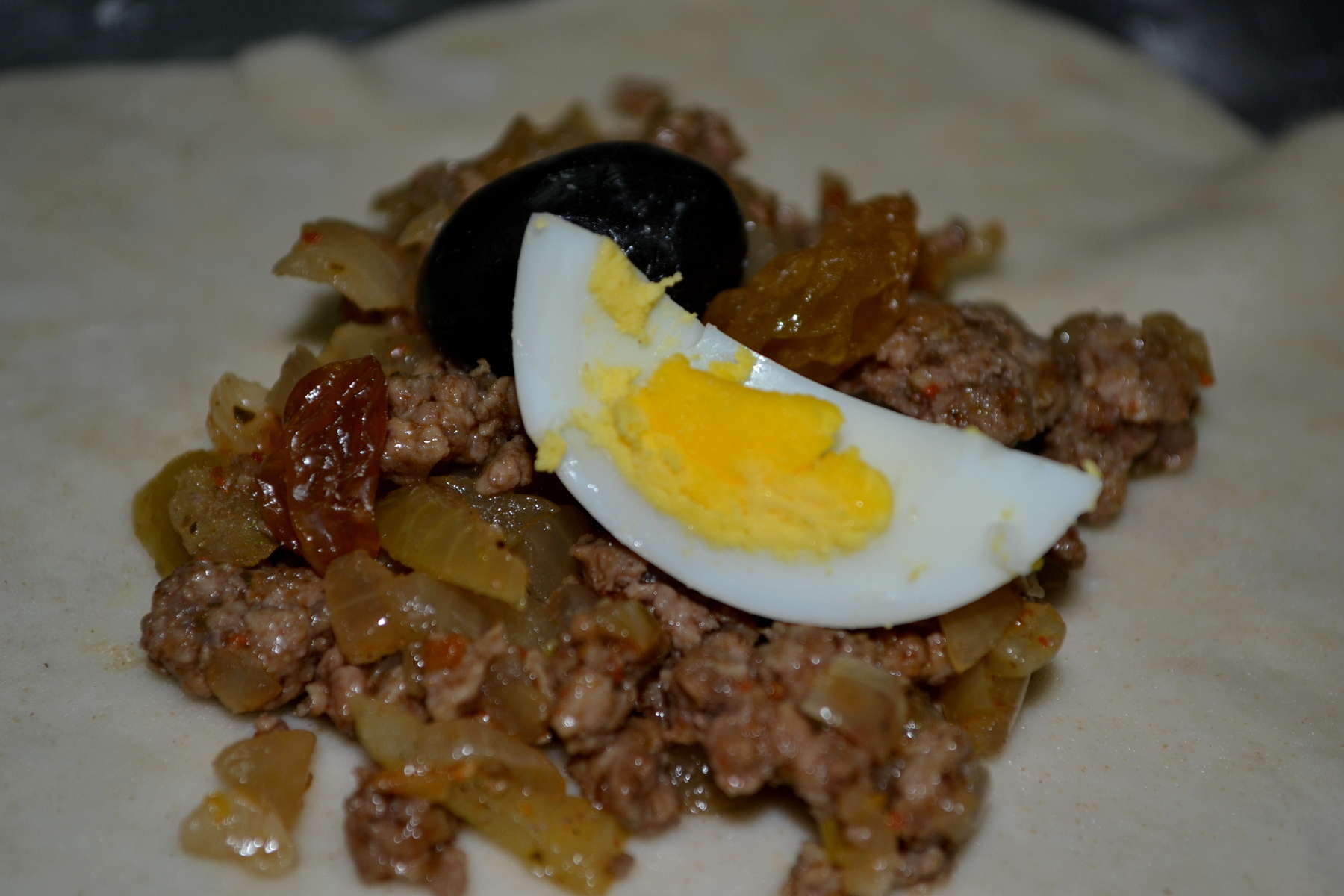 If you have never had an empanada before you are missing out. A pocket of soft dough filled with meat, cheese, vegetables or fruits – it is a snack that is common in Latin America, Southern Europe and some parts of the Southwestern USA. The name comes from the Spanish word “empanar”, which means to “wrap in bread.”

The empanadas we made were a specifically Chilean recipe – empanadas de pino. The distinctive feature is the filling, which is made from ground beef, onions, raisins and boiled egg as well as one black olive in every empanada (watch your teeth on the pit!). Chilean empanadas are also much larger than the Argentinian version, almost large enough for a full meal. 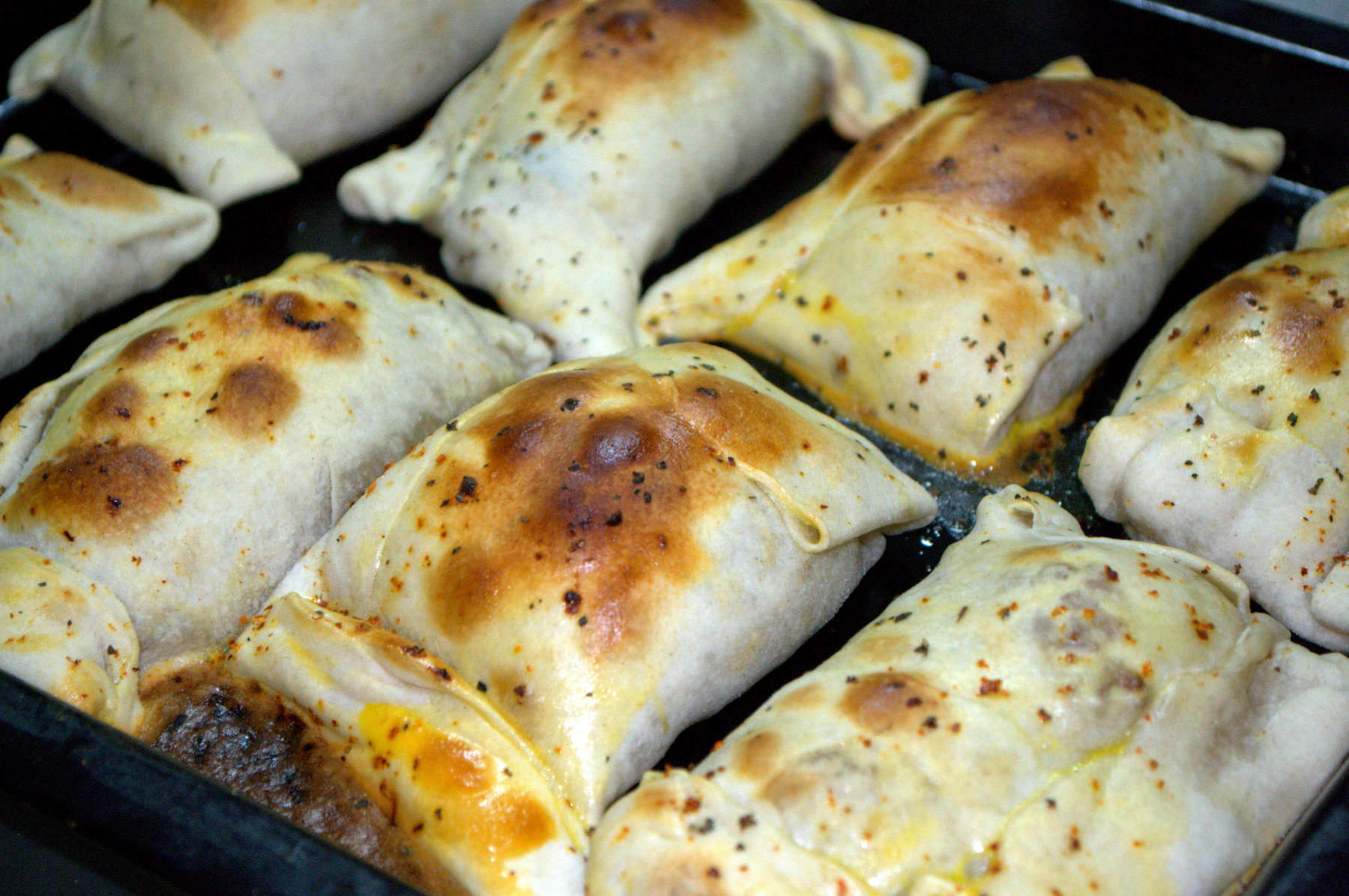 We made every step of our empanadas from scratch, including the dough. Made from flour, water and lard it must be hand-kneaded until it reaches the right consistency and can be rolled out into thin sheets. I loved the hands-on nature of the process, it reminded me of the fun I had baking cookies with my family as a child. 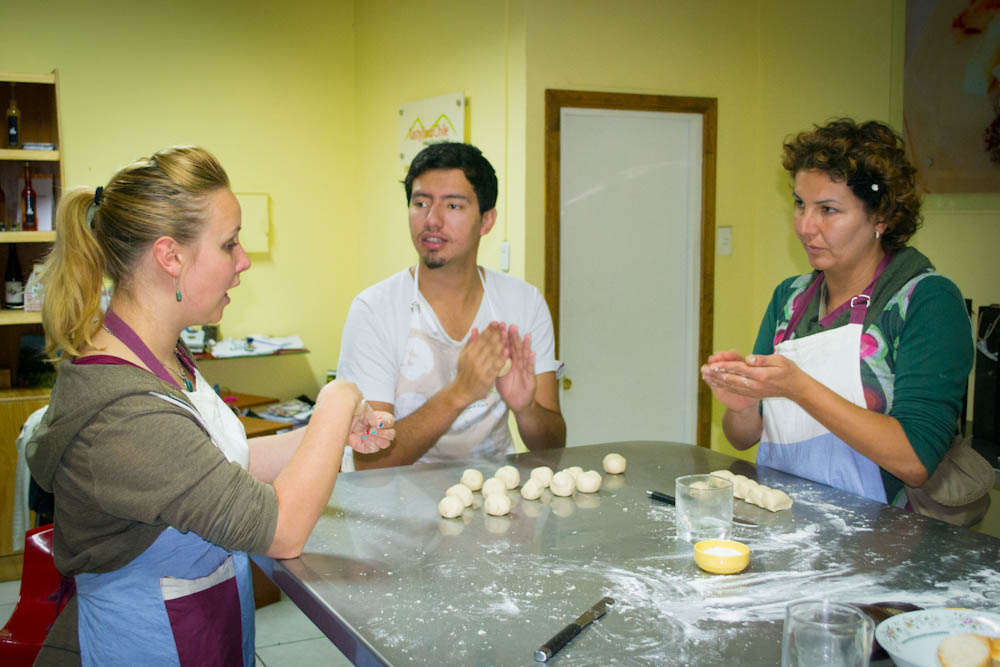 After we rolled out the dough, we spooned the filling into the middle and folded each one into a little meat-filled pastry square – painting them with egg whites before baking in the oven. The warm joy of biting into a hot and juicy freshly baked empanada is an experience I will never forget!

A Night of Beer Tasting

We not only celebrated the cuisine during our time in Valparaiso, we also enjoyed the local beverages. On Saturday night Melissa invited us to a beer tasting event at the pub right next to the Tasty Tour Chile kitchen, L’Emporio della Birra.

The presentation about the history of brewing was in Spanish and our grasp of the language is very basic, so we only understood a few key words. However, the taste of a good beer transcends all languages and we enjoyed the five different local brews we got to sample.

There were a full range of beers, from dark, strong, coffee flavoured stout to a fruity blond beer to a rich and complex amber ale. We were also served appetizers that were specifically designed to complement the flavours of the beers, such as mini fish tacos and spicy chicken cooked in ale. Our favourite beer was the Arrayan, a light and refreshing pale ale brewed right on site. 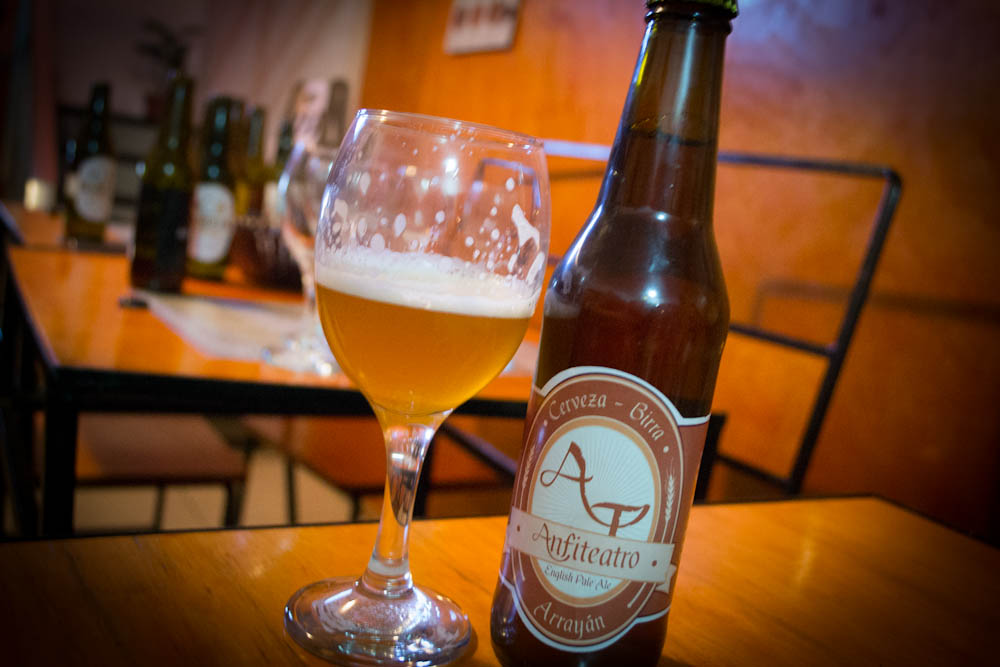 Barbeques and Horseback Riding at the Beach

After a couple of days of eating great food and drinking artisan beers, we didn’t think life in Valpo could get any better. Then, Sunday rolled around and Melissa invited us to enjoy a barbeque and horseback riding at Posada del Parque on a beautiful sunny afternoon with her family.

Posada el Parque is located a short drive outside of Valparaiso and it is a relaxing eco-tourism guesthouse, surrounded by pine forests, sand dunes and close to a long stretch of sandy beach. It’s the perfect place for a laid back barbeque and a few drinks around the campfire, which is why Melissa envisions offering outdoor cookout experiences there for her guests.

Lee and I, along with Melissa’s mother, got equipped for our horseback riding experience. Lee was nervous, it was his first time on a horse. (Although I assured him that if he could ride an elephant then this would be no problem). We saddled up and hit the trail.

At first, it seemed that the horses had a different opinion of how they wanted to spend the afternoon – they would much rather stand stubbornly still and eat enormous mouthfuls of grass while resisting any commands from their riders or the horse trainer. After much cajoling, we finally got them moving. My horse was a little bit anti-social and liked to bite the others if they came near, so I had to watch out! 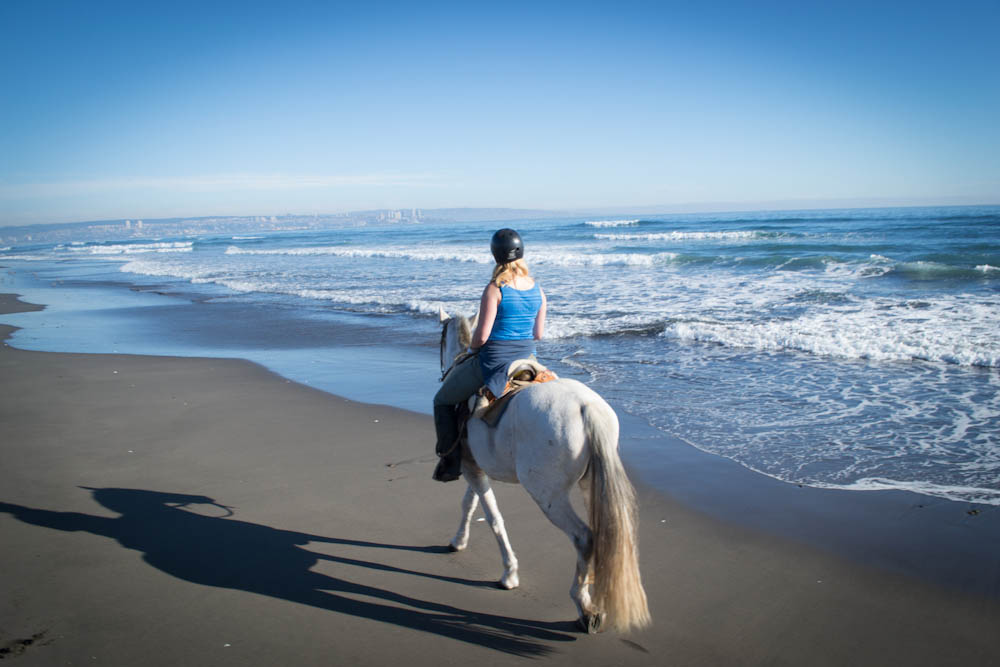 Our two hour ride took us through forests, sand dunes, across ponds and along the beach – giving us a great opportunity to admire the view of Valparaiso. By the time we waddled back to the guesthouse on our bowed John-Wayne legs, Melissa, her sisters and her son had already cooked up a fantastic feast.  We dined on chorizo, beef and chicken skewers, fresh lettuce, more pebre and red wine. 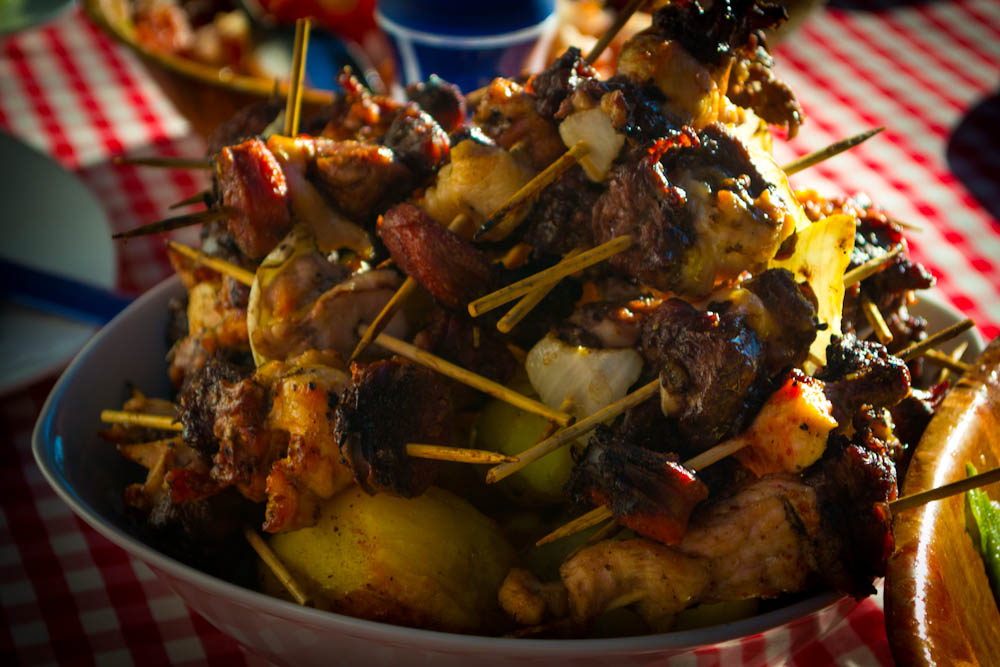 From seafood to empanadas to beer to barbeques, Melissa really showed us a good time and ensured that we were well fed and entertained. Valparaiso was one of my favourite cities in South America so far, and getting a taste of Chilean cuisine and culture made me love my time there even more.