“Fsshshaa!” shouted Lee, his mouth wrapped around a snorkel and his face underwater while snorkeling on the Great Barrier Reef.

Floating facedown beside him, I mumbled back, “Hmmm?” (Or, at least I tried to with a snorkel in my mouth.)

“Fsshshaa!” he shouted again. I turned to him in confusion. Was he okay?

We popped our heads out of the water, spit the snorkels out of our mouths and I said, “What did you say?”

“Fishies!!!” he grinned, gesturing at the rainbow-hued, shimmering fish that were swimming all around us. I laughed. Yes, fishies indeed.

Every now and then I experience something that makes me feel incredibly grateful that I live a life of travel. Snorkeling on the Great Barrier Reef is one of those iconic once in a lifetime experiences and I’m thrilled to have experienced it first hand. 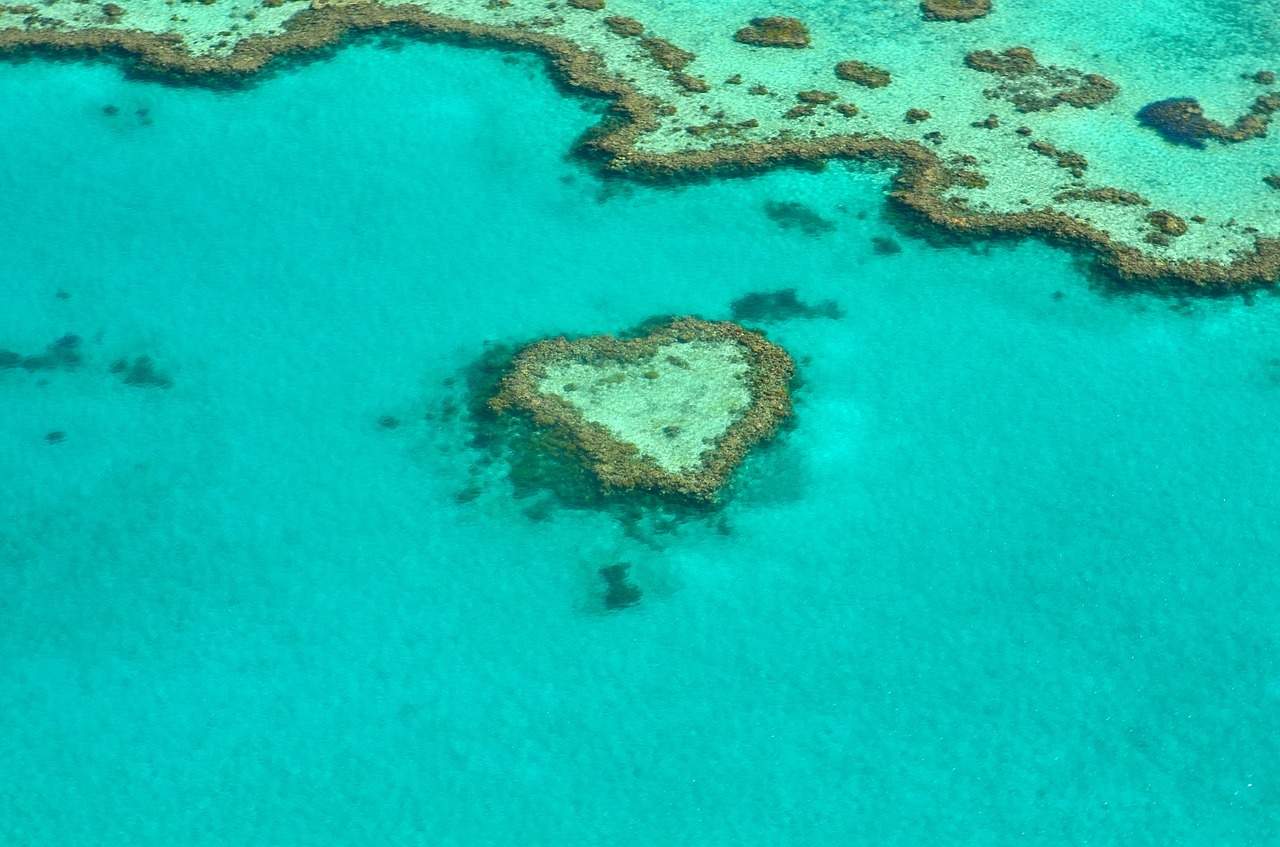 The Great Barrier Reef is the largest living thing on earth, a teeming mass of coral that is visible from space. Diving beneath the surface of the turquoise water gave us a glimpse into this thriving underwater world of bright colours and strange creatures – and plenty of fishies.

The best way to see the UNESCO World Heritage listed Great Barrier Reef is to take a snorkeling or diving trip. We took a trip with Passions of Paradise, a travel company that was recommended by our Airbnb host, who is also a travel agent in Cairns. The full day boat trip gave us a chance to put on a mask and fins and get up close with tropical fish, giant clams and amazingly complex coral formations.

There are many trips to choose from on the Great Barrier Reef, but we learned that not all of them are created equal. Some will not take you to the outer reef and will only take you to Green Island, which is more touristic and crowded. The tour we chose took us to some of the more remote diving spots on the outer reef such as Michaelmas Cay and Paradise Reef. However, if you plan on snorkeling on the Great Barrier Reef you will have a lot of options. 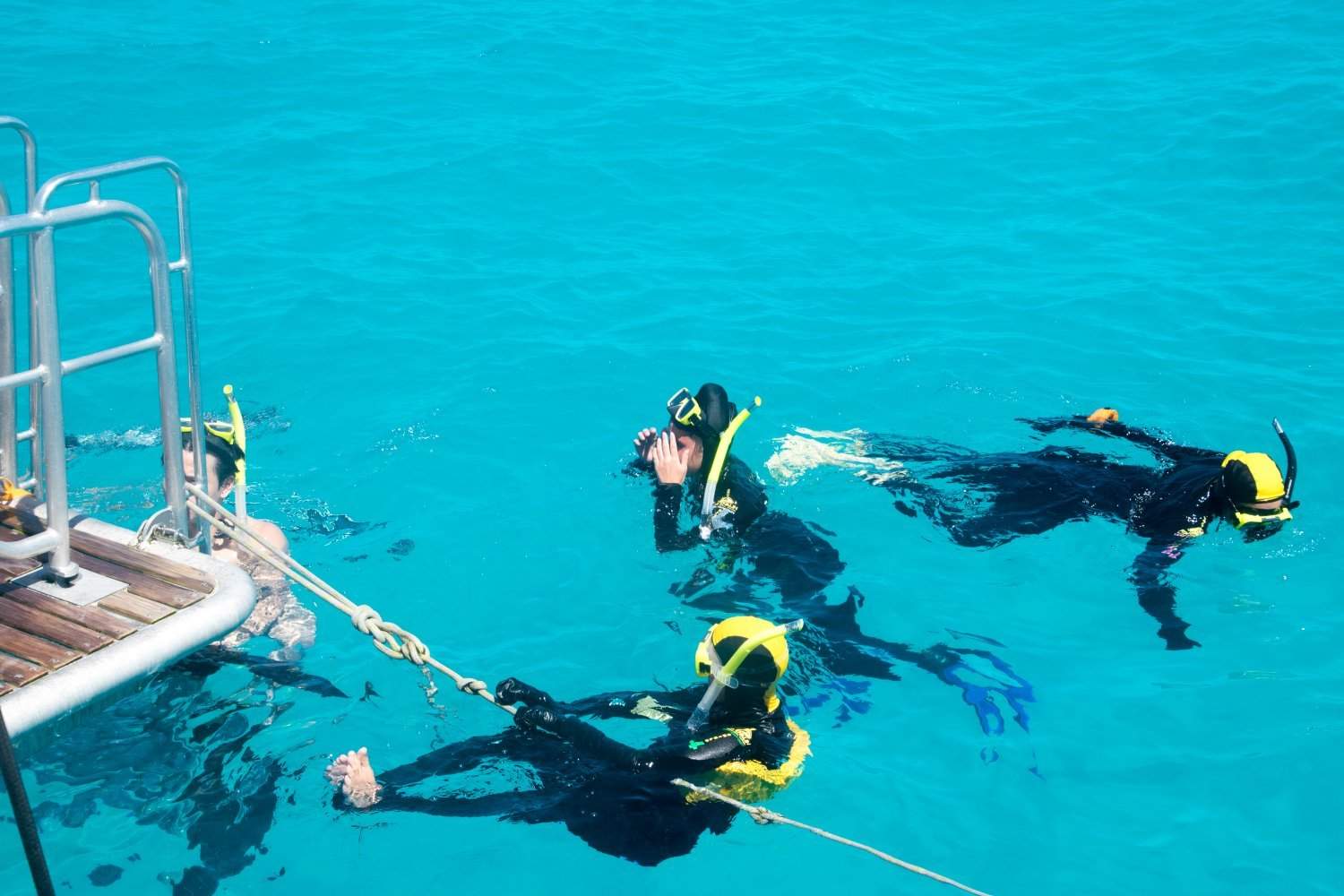 The reef is enormous and it is actually made up of around 2,900 different individual reef formations. Together, the reef covers more area than all of Italy and it is home to at least 10% of the known species of fish in the world.

We arrived at the marina at 7:30 and check in was easy, tea and muffins were waiting for us on the boat. I scarfed a chocolate muffin and took a seasickness tablet, remembering what happened on the San Blas Islands.  The seasickness tablets only work if you take them before you set off, once you start to get sick it is too late. Also, although I am notoriously terrible on boats I find that the best strategy if you feel queasy is to sit outside on the deck, breathe the fresh air and stare out at the horizon until your stomach starts to settle. 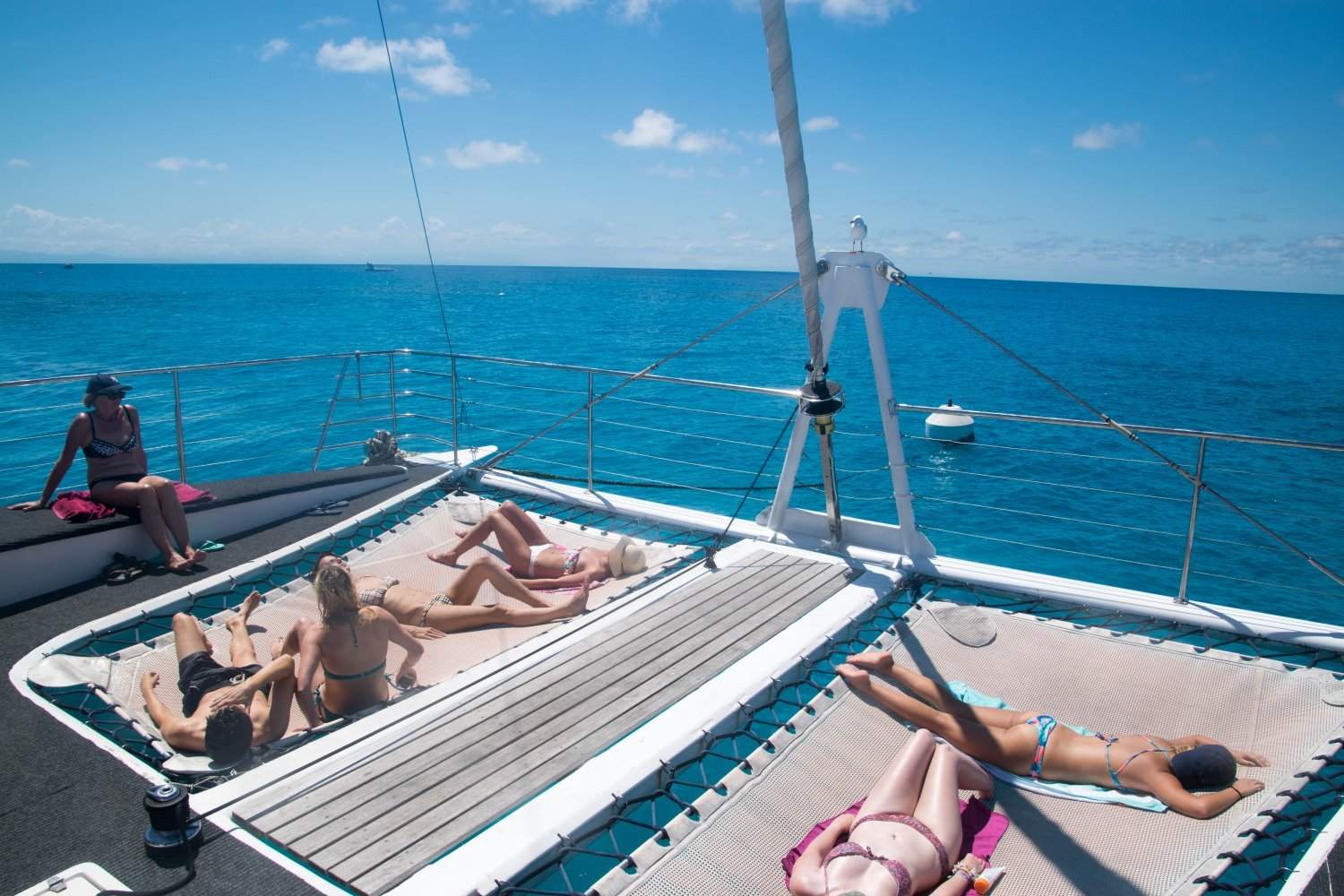 Luckily, the sea was like glass and the motion of the boat was pretty calm, so I didn’t find myself puking uncontrollably this time. Yay.

Before we began snorkeling on the Great Barrier Reef, the crew came around with a two sided form for us to fill out, identifying any health issues. The German girl next to us had several to mention including a damaged radial nerve in her wrist and a tendency to faint.

“What causes you to faint?” asked the concerned crew member.

“Hot and humid weather,” she replied matter-of-factly, which made our entire table break out into nervous laughter. “Don’t worry,” she reassured us, “I’ll be fine.”

After dozing off for a bit, I wake up to a snorkel talk explaining how to keep the mask from fogging. Stinger suits are an extra 8 each, we decide to risk it and save the money. (It turned out that we were absolutely fine, but it’s up to you.) The crew gave a detailed explanation of snorkeling on the Great Barrier Reef and how to stay safe, so even if you have never snorkeled you would be fine on this trip. 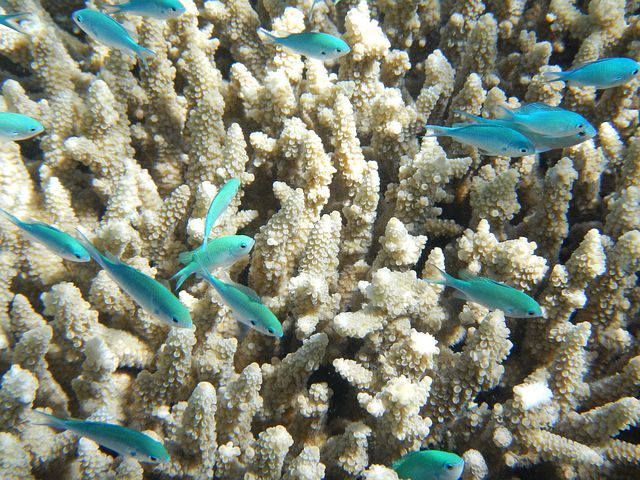 We chose not to scuba dive, but if you wanted to dive it was $70 extra. I watched the divers get their introductory lesson and then plunge deep down to the ocean floor to peer into the cracks and crevasses between the coral.

As Baz Luhrmann says, trust me on the sunscreen. Even though we wore Factor 50 sunscreen and we applied it multiple times, our skin was still tight, red and hot to the touch that evening. Don’t skip the sunscreen. Also, try to stay in the shade of the boat’s interior during the heat of the day – the sun is no joke. 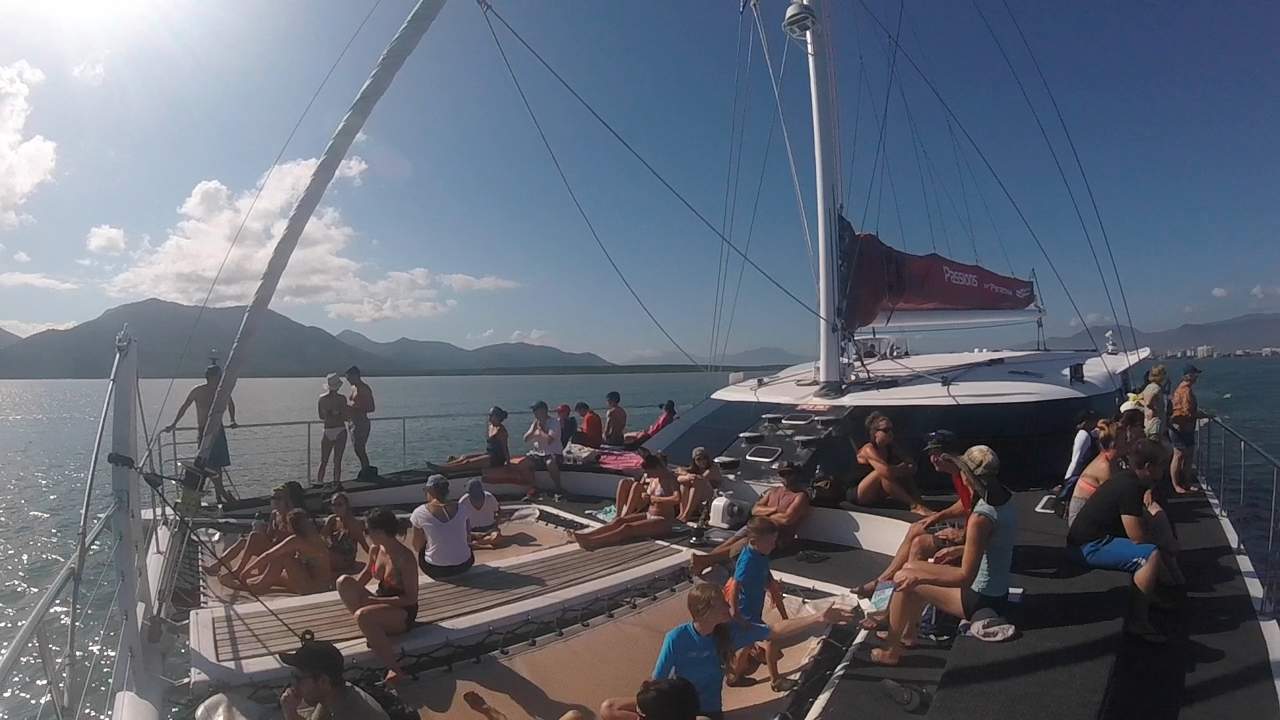 Our first stop was Paradise Reef. The water was calm and clear and we saw bright blue Tangs (Dory), large rainbow fish and black and white striped fish that Lee referred to as “Newcastle United Fans.” Fat sea cucumbers rested on the ocean floor and the colorful anemones waved their chubby fingers at us.

We had borrowed a Go-Pro from one of the girls at our AirBnB accommodation, so we had a lot of fun filming the fish underwater while snorkeling on the Great Barrier Reef.

Swimming along the edge of the reef and peering down into the endless blue nothing below it gave me a sense of dread and I quickly paddled away. It’s easy to forget that when you are out in the middle of the ocean you are just a puny human being at the mercy of the incredible forces of nature.

Then we had lunch. I’m glad that I wasn’t feeling seasick because I was able to feast on the delicious fresh tropical buffet that was on offer. Then we went to another island – Michaelmas Cay.

Our second stop was a strange island called Michaelmas Cay. It was simply a small stretch of sand filled with the stench of bird poo and the cacophonous squawking of hundreds of birds. It was declared a sanctuary in 1937 and later in 1975, a national park. It also has cultural significance to the Gunggandji, Mandingalbay-Yidinji and Yirrganydji indigenous peoples.

We had the option of taking a glass bottom boat transfer to the island, but we snorkeled there instead. If you wanted to be able to see the fish on the reef without having to get wet, the glass bottom boat tour would be the perfect option for you.

The reef around the Cay is rich with sea life and we saw lots of underwater creatures, including fish that had matched the colour of the sand surrounding them so perfectly that they appeared transparent.

“What are those vagina-like things called?” Lee asked, pointing to the enormous clams on the seafloor. Giant clams are actually quite fascinating creatures. They can’t move, so they release their sperm and eggs into the water to mix with neighboring clams. Sexy.

You know when you get those strange intrusive thoughts and you wonder how your mind went to such a bizarre place? As I was swimming overtop of those giant clams I wondered what it would feel like to slip my hand inside the spongy folds. What would it feel like inside? Would it clamp down on my hand? Would I get stuck underwater and slowly suffocate? The thought gave me a chill and I was careful not to get too close – just in case.

Back on the boat on the way home, the people sitting at our table were slightly nervous as it was Election Day and it was becoming clearer that Trump could win. We sat watching our phones and speculating on what might happen. The guides announced, “we will be back before happy hour so you can enjoy the few hours left before the apocalypse.” 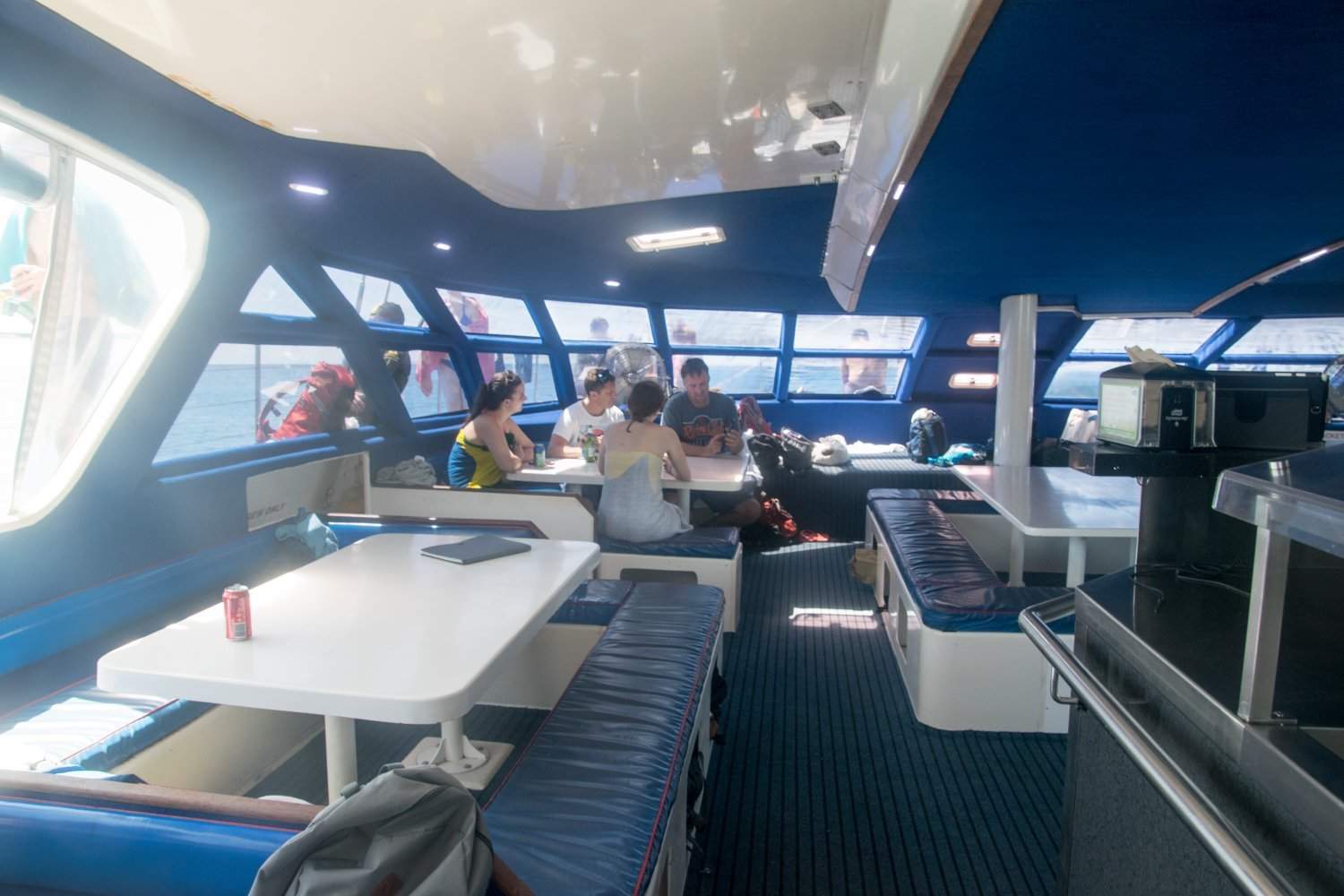 Apocalypse aside, I’m glad we didn’t have anything planned for the evening, we were exhausted from waking up early, swimming, snorkeling on the Great Barrier Reef and being in the sun all day. It was all we could muster to get back to our AirBnB and make dinner – we were asleep by 10:45 and dreaming of fishies.