I took a breakdancing lesson once and I didn’t learn a thing.

It’s not that the instructor didn’t have the skills – he could twist and spin and writhe all over the floor with incredible style and agility. It was his teaching ability that was lacking. He knew plenty of great moves, but he could not break them down and teach them – step by step – to a beginner.

He would say, “It’s easy, all you do is this,” and then launch into a complex series of moves.

He didn’t seem to understand that in order to learn any physical skill, whether it is dancing, swinging a golf club or driving a car, the movement must be reduced to its simplest components. Each aspect of the movement must be understood, before the learner can put those components together into a fluid motion.

Fortunately, my surf instructors in Byron Bay knew this – which is why in only a couple of hours I went from falling off my board to standing up confidently and riding a wave all the way to the shore. 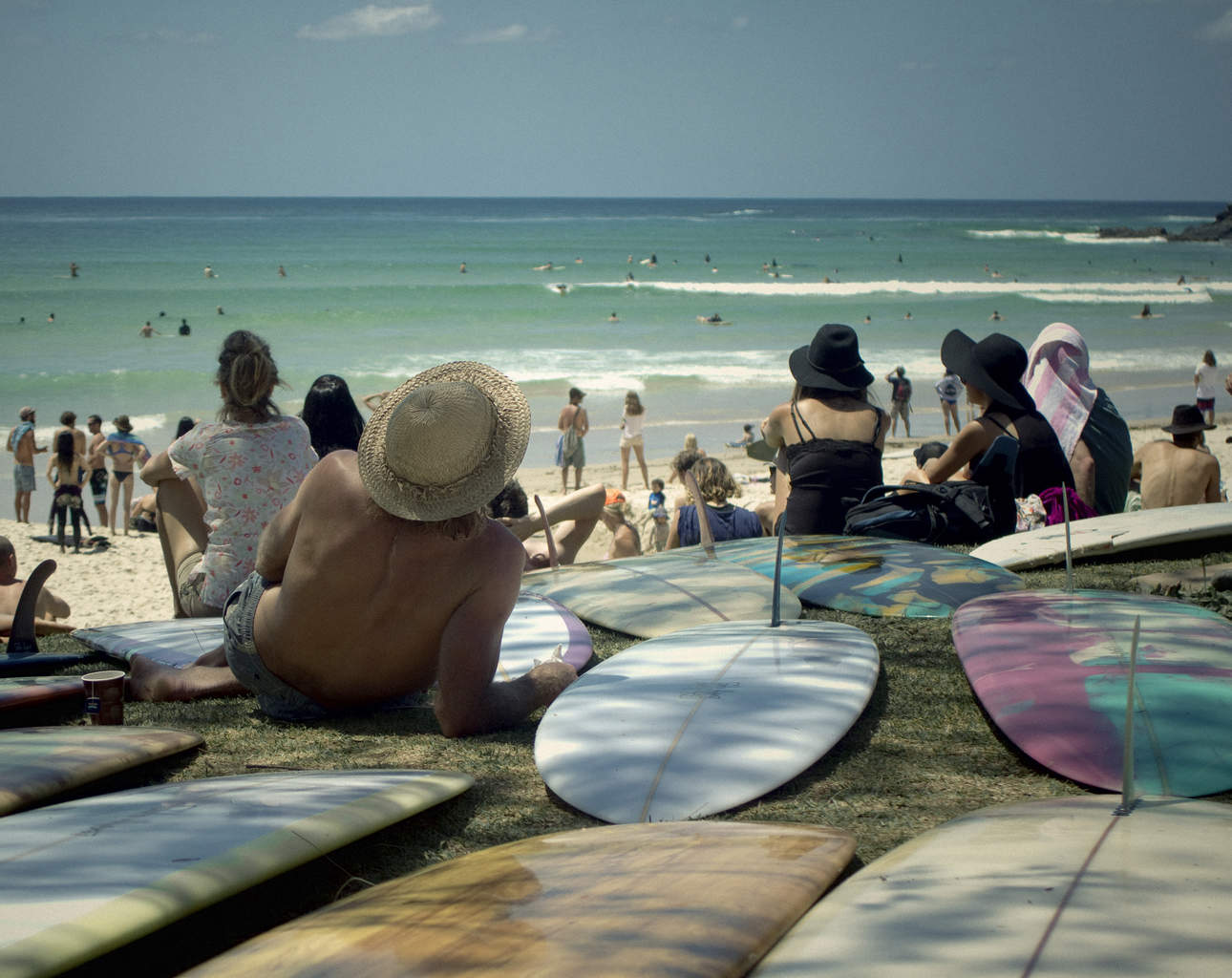 We dragged our surfboards to the beach – I struggled with the size and the way that the wind tried to push it out of my hands. We put our boards down on the sand and got a few pointers on technique and safety. Fortunately, the beach where we would be surfing isn’t known for sharks, stingers, riptides or other dangers so our instructors, Dom and Stu, told us not to worry. (Which was a relief, because I always feel like Australia is trying to kill me one way or another.)

We got a quick tutorial on the basic moves. The main challenge is getting up from a belly-down position to standing on the board – without toppling over and splashing into the water. This is where correct technique is essential, because if your feet are in the wrong position, you are bent too far forward or your weight is distributed incorrectly, you’ll go tumbling.

My yoga experience came in handy here – the sequence of moves from lying down to standing was so similar to cobra pose – downward facing dog – warrior pose that it already felt very familiar to me.

Once we went through the moves a few times, we hit the water. For our first few waves, the instructors lined us up in the right position and let us go when the wave hit us, like parents sending their child down a slide. It was handy, because I was so focused on getting the movement and posture right that I couldn’t have also concentrated on the timing of the waves.

Plus, it made me feel safe and removed any nervousness about the unfamiliarity of the situation. By the end of the day, I had progressed so much that I was able to paddle into the waves and catch them myself.

The coaching that the instructors offered was comprehensive and it continued to build on my skills as I improved. I got the foot positioning right, but then I was looking at my feet rather than straight ahead of me. When I got that right, Dom and Stu coached me to correct my arm position.

With each little tweak my technique got better and everything started to make more sense in my mind. I started to understand what it would feel like when I did everything right. 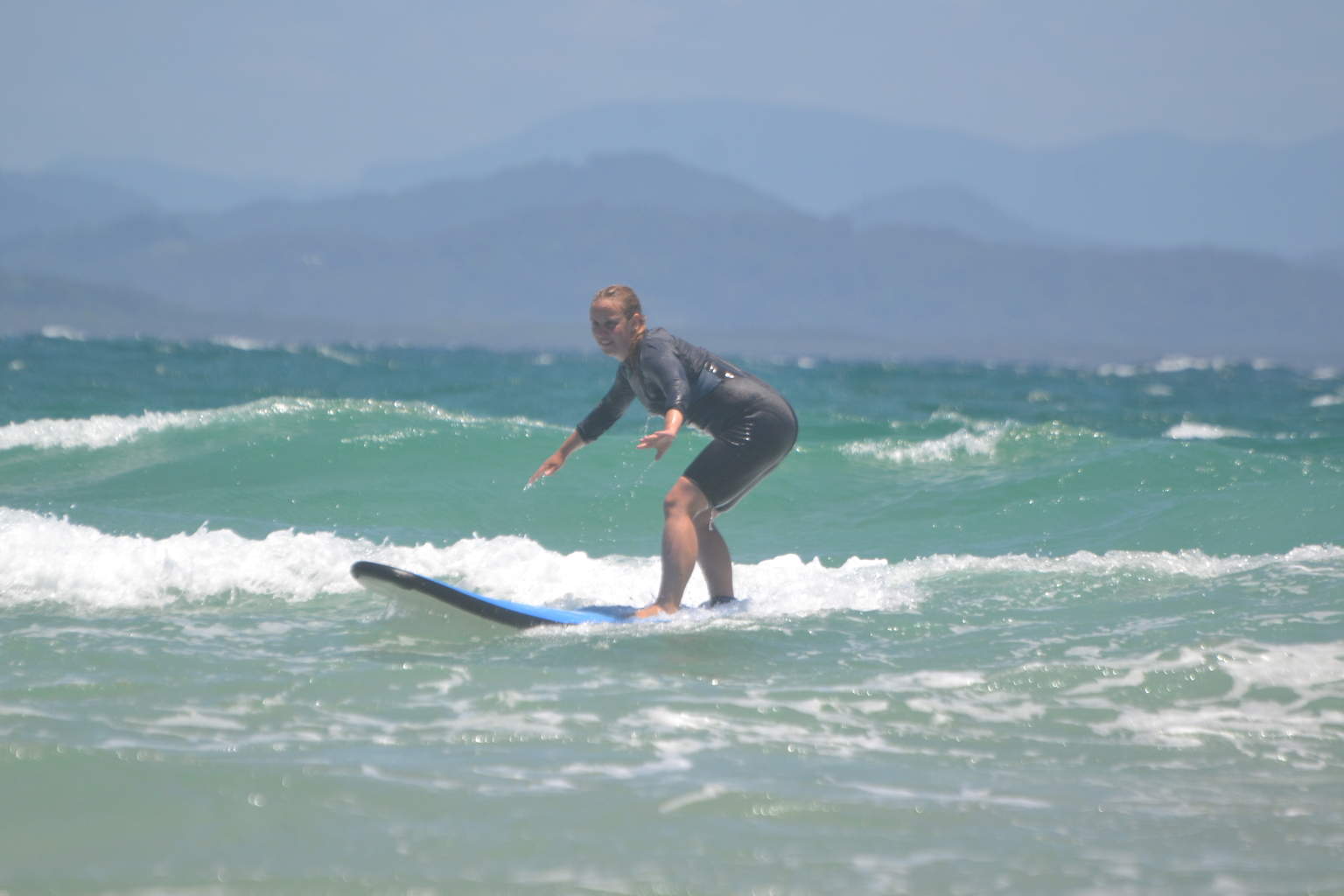 Then I did it. I managed to get up on the board in one fluid motion, put my feet in the right place, stand up smoothly and ride all the way to the shore. It felt amazing.

After it “clicked” in my mind I had many successful runs like that one, each one ending with a giddy little victory dance in the ankle deep surf.

Surfing is an incredibly difficult workout. I understand now why surfers always have such muscular lithe bodies. Just floating in the surf and keeping hold of your surfboard is difficult enough, but the act of paddling and pulling yourself up onto your board is much more strenuous than it looks.

After a couple of hours in the ocean my legs felt like jelly and I wanted to lay my head down on my board and take a nap. 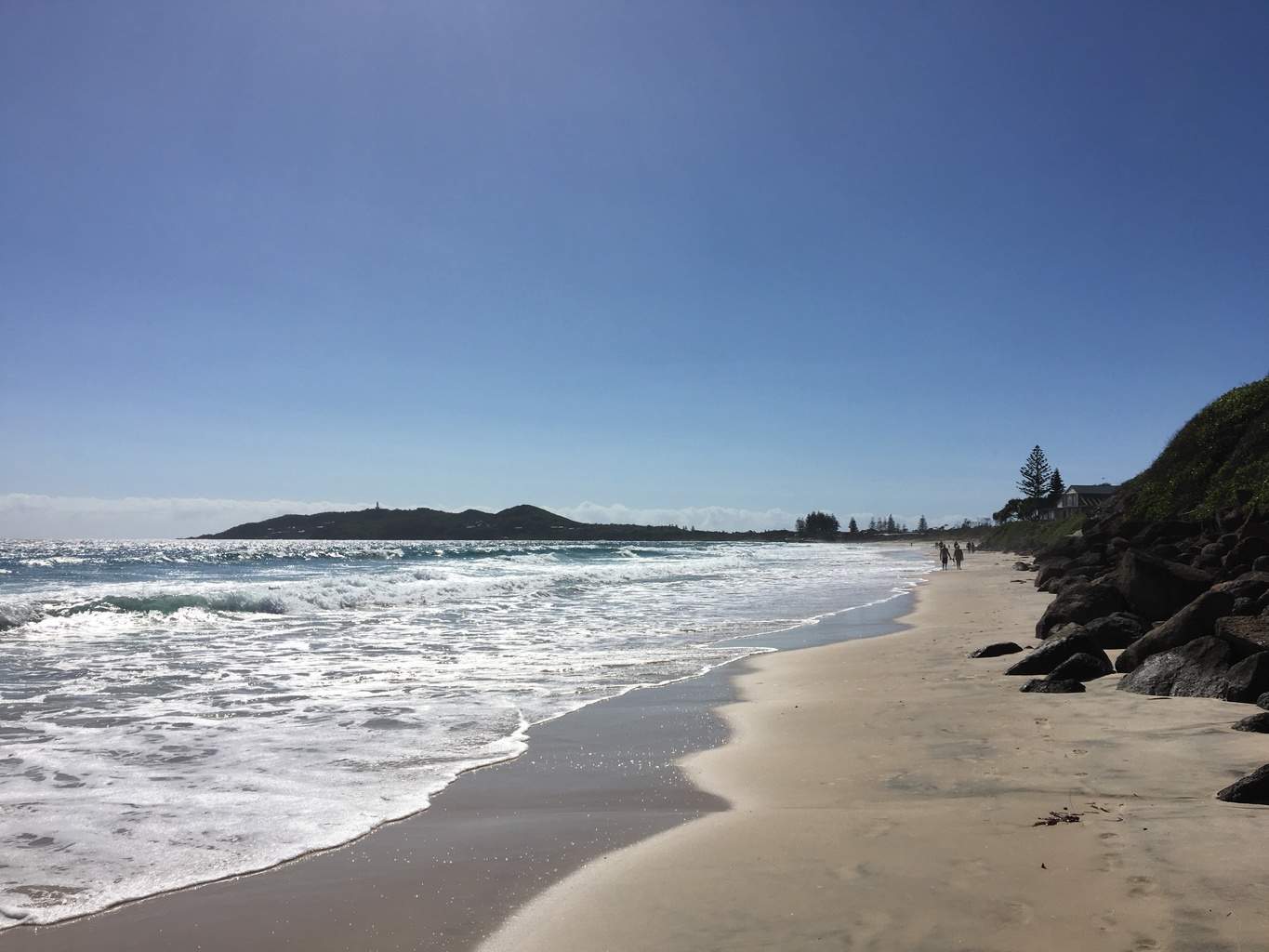 Just when I thought my muscles couldn’t do any more, it was time to pack up the boards and head back to Byron Bay. I leaped and hopped across the hot asphalt of the parking lot. (Don’t make the mistake I made by leaving my flip flops at the surfing school – make sure that you bring them with you!)

I had such a great morning surfing in Byron Bay with Black Dog. The one on one coaching from the instructors made me feel more confident about surfing. Now that I have a basic grasp of the technique, I feel like I could go a few more times and really start to improve. The instructors not only have the surfing skills, but they have the ability to break them down and teach them to beginners – which makes a big difference.

If someone as notoriously clumsy as me can learn to surf, then you probably can too – and Byron Bay is a pretty great place to start.

Would you like to learn to surf? Have you ever given it a try? Let me know in the comments below.

Fraser Island: A Paradise Made of Sand

Snorkeling on the Great Barrier Reef

How to Get an Australia Working Holiday Visa